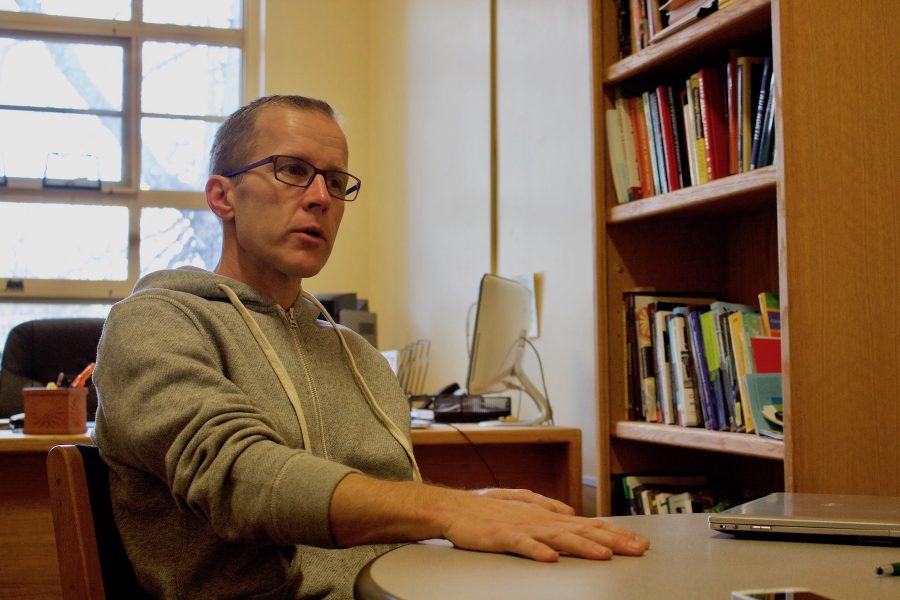 Brett Bruyere, a professor of environmental communication at CSU, is set to receive the 2017 International Humanitarian Award. Bruyere is being recognized by the United Nations Association of Northern Colorado for his work on developing sustainability in Kenya. {Abby Flitton | Collegian}

Brett Bruyere worked in Africa for 12-13 years, attempting to make the world a more sustainable place.

Bruyere, an assistant professor of environmental communication at Colorado State University, was recognized by the United Nations Association of Northern Colorado and presented with the International Humanitarian Award Dec. 10.

Most of Bruyere’s academic research focused on developing a landscape that would support all wildlife and livestock people are rasing in a geographic region called Samburu in Northern Kenya.

Bruyere said there is a lot of social change going on, such as women having more rights and people wanting their kids in school, which was not a priority a generation ago.

According to Bruyere, the climate has become less predictable for the region, so he is studying how the landscape can support people and animals and how they are adapting.

Bruyere said a critical piece to long term sustainability will be women having more power in decision-making and young people having more access to higher levels of education.

“There’s only so many times you can continue drawing the same conclusion before you ethically feel as a researcher, “Am I now obligated to do something … as a researcher about this with the community?’” Bruyere said.

According to Bruyere this was early in his career when he was trying to establish some identity and expertise.

“This community gave a lot of access for me to do research and for me to get established as a professional,” Bruyere said. “It sort-of felt like there needed to be an equal benefit for them as I was getting out of the work we were doing there.”

Bruyere said the the non-profit Samburu Youth Eduction Fund started in December 2010 to provide scholarships for high school, which is not free in Kenya.

“Our primary mission is to invest in the future leaders of that region,” Bruyere said. “While (women) want their kids to be in school … that will never be a reality if they have to pay for it themselves.”

The organization does programming on the school breaks for leadership and social change. The purpose is to try to give kids skills to think about how to create change in a community.

On top of working with the kids, the organization works with the Samburu women’s village.

According to Bruyere, the women’s primary skill is beadwork. The organization started to sell the beadwork in order to fund the scholarships and allow the women to buy food, school supplies for their kids and pay for medical fees.

“These are women who have very little formal educations and they’re not going to be competitive for jobs, but they are fantastic artists, when it comes to beadwork,” Bruyere said. “That’s also a very important part of the equation toward a socially and ecologically sustainable and healthy region.”

Collegian reporter Abby Currie can be reached at news@collegian.com or on Twitter @abcchic15.