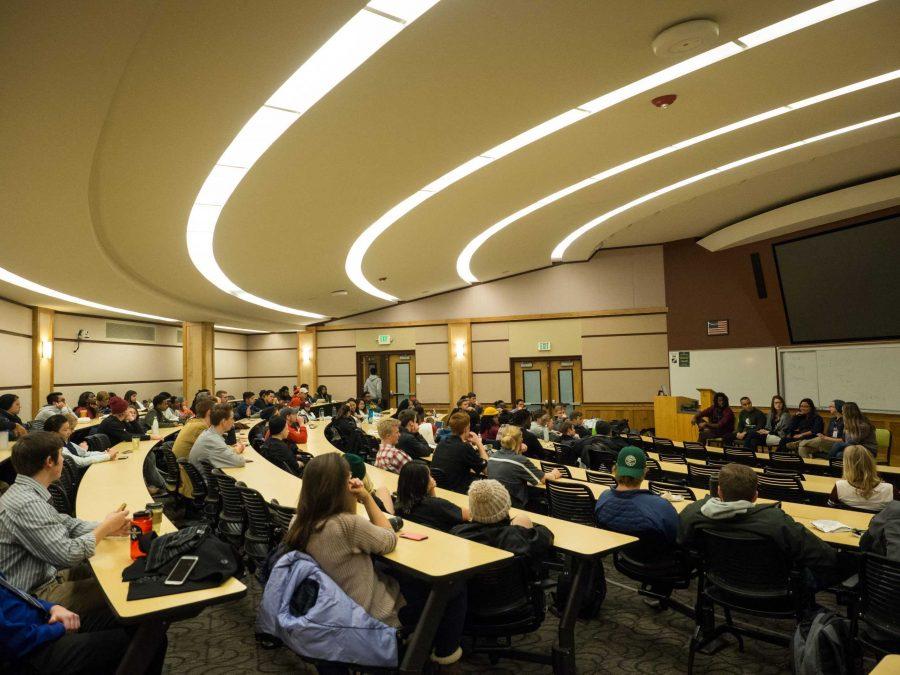 CSU students gather to discuss the importance of mental health, especially on college campuses, with the guidance of professionals from the CSU Health Network. (Field Peterson | Collegian)

The Theta Chi fraternity welcomed students to their “Ending the Stigma” event with Chick-fil-a, cookies and the promise of student-lead conversation on the topic of mental illness.

The fraternity hosted the event in order to raise awareness about mental health in the Clark A102 lecture hall from 5 p.m-6 p.m Nov. 7.

James Stadelmaier, freshman health and exercise major and Theta Chi class treasurer, said the purpose of the event was to encourage students to talk about mental health issues that often get pushed aside.

“For people ages 15-24, the number three reason for death is suicide,” Stadelmaier said. “It’s something that shakes me to my core, but I have a hard time talking about it. A lot of us do.”

To set the tone for the personal nature of the night, hip-hop artist Mitchell Alexander Khoshdel “M.A.K” performed a song off his upcoming album centered around different types of mental illness.

Khoshdel said he wondered if his experience with depression was nothing more than a “bad phase,” something students in the audience reiterated throughout the night.

In response to this, panelists discussed the stigma surrounding mental health, including issues such as self-diagnosing, misconceptions about mental illness and some of the cultural and social barriers that keep people, especially those within marginalized communities, from seeking help.

“It’s very common for people to go through periods of time when they’re feeling depressed or anxious … they’re the most common things we see at the counseling center,” Brenner said.

Brenner cautioned students not to self-diagnose themselves as being mentally ill, because these symptoms can indicate that one’s body is reacting normally to overwhelming circumstances in life.

On the topic of stigma, Lopez-Duran said that one way to best help others is to reiterate that there is no shame in seeking help.

“There’s this stigma of not wanting people to think that you’re crazy,” Lopez-Duran said. “We need to all advocate that it’s okay to go to counseling.”

Stanfield said that misconceptions of mental illness often lead people to want to “fix” their friends and loved ones’ suffering.

“I think a lot of times the word ‘mental illness’ causes people to think of things in a disease model,” Stanfield said. “But in many cases, these people are not broken and they don’t need fixing.”

Panelists also emphasized the importance of self awareness, both when helping others and when taking care of oneself.

When asked about how to approach friends that may be depressed or suicidal, Adams said that it can hard to start a conversation with someone you’re worried about in part for selfish reasons.

“A lot of times we focus on our own barriers … (but) if you think your friend might be considering suicide, you need to ask that question no matter what,” Adams said. “Although it can be hard, you’d rather have friend that’s alive and angry than a dead friend.”

Adams also said that students wanting to help a friend can use CSU’s Tell Someone referral service. Although the service cannot guarantee anonymity, Adams said that students can request to have their name withheld if this is a major concern.

Panelists also shared resources that students can use to help themselves, including the five free counseling sessions available to all students through the CSU Health Network. After this the cost is $10 per session.

The fraternity hopes to host future events like this in order to continue the conversation surrounding mental illness, according to Stadelmaier.

“I want (people) to know that they’re not alone,” Stadelmaier said. “If they are struggling, there’s people they can go to, there’s other people who are going through the same thing, there’s always some way that if you’re suffering you don’t have to go through it alone.”