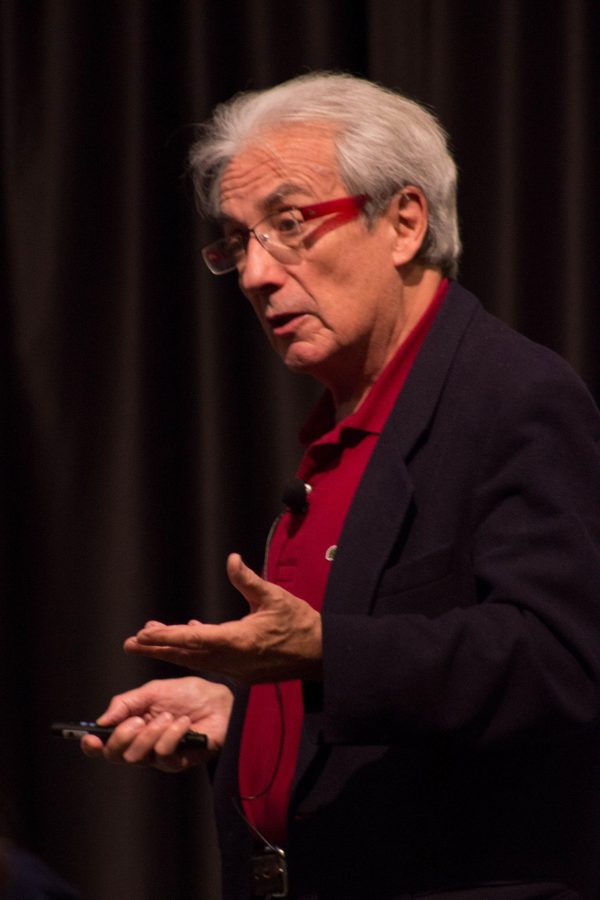 Dr. Albert Fret speaks to students in the Lory Student Center about his research in physics that won him the Nobel Prize in 2007. (Brooke Buchan | Collegian)

Nobel Laureate Albert Fert spent a couple days at Colorado State University speaking to scientists with all ranges of education, from undergraduates to professors, about the field of magnetism and his contributions to it.

“There were a lot of things I realized I had to do (after I won the Nobel Prize),” Fert said. “I realized this is a change of the life, I have a lot of new responsibilities.”

Fert initially did not know he wanted to become a scientist, but while studying at a college level, he became impressed with his physics professor who studied magnetism, which guided the rest of Fert’s career in the same field.

“I was more attracted to the arts,” Fert said. “I thought it would be a more creative job. My general feeling was that science was not what I was going to do in the future.”

Currently, Fert is involved in the field of spintronics, the study of an intrinsic spin and magnetic moment of an electron. Fert specifically focuses on magnetic skyrmions, which in a theoretical paper he published in 2009, has been integral to the advancement of this field.

Skyrmions can be described as nanoscale magnetic vortices and are topologically protected spins, which means that they cannot revert to their original state.

“A simple way to describe it is in terms of knots,” said Kate Ross, a physics professor at CSU who studies frustrated and quantum magnetism. “if you tie a knot and then fuse the two ends of the rope, you can’t get the knot out without cutting the rope. You can move the knot around but can’t undo it. It’s topologically stable.”

Skyrmions can be applicable in more compact memory storage due to their twisted magnetic structure. Research in this field is currently consistent on the fundamental properties in order to hopefully improve the field of magnetism like the discovery of the giant magnetoresistance effect did in 2007.

Fert sees scientific research as a creative job and hopes that the students see it in the same way. According to Fert, research is like making ideas come to life, which leads to greater discoveries and recognition of those discoveries.

“For me, doing physics and research is fascinating and is a real pleasure,” Fert said. “It’s a creative job. I can dream an idea and see it become a reality. The Nobel Prize is the cherry on the cake at the end.”

Those who attended his talks found some of the information difficult to understand, especially those at an undergraduate level. On the other hand, Fert’s deep understanding of the field of magnetism was very informative to graduate students and professors.

“As a chemist who’s never heard about a lot of this stuff — skyrmions in particular —  it was fascinating to be introduced to this topic by someone who founded the field,” said Christopher Rom, a first year chemistry graduate student. “I really enjoyed it.”