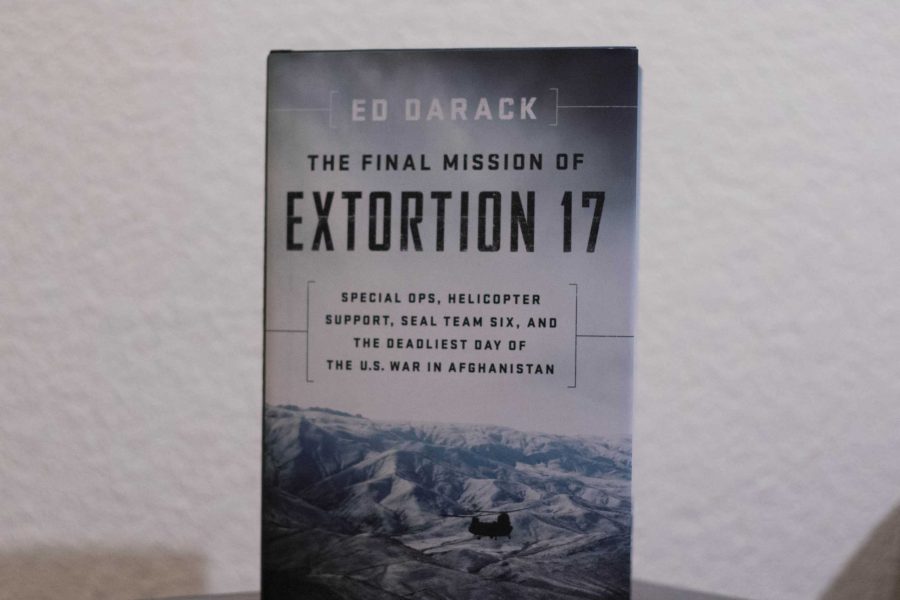 With combat stories and military insight, author, photographer and journalist Ed Darack spoke about his experiences with the Marine Corps and his most recent book, “The Final Mission of Extortion 17” Tuesday evening in Clark C 251.

In 2005, a Marine Corps group headed to Afghanistan invited Darack to join them in some training at the Mountain Warfare Training Center as a freelance photographer. Through his experience with the Marines, Darack gained the trust of military personnel to write books like “Extortion 17” and “Victory Point,” which are military stories he heavily investigated in order to make sure he shared the truth.

“(The military is) just interesting,” Darack said. “I get to see a lot of really amazing stuff. It’s just amazing to see what goes on and there’s a lot of interesting and fascinating people.”

“Extortion 17” tells a story about a U.S Army helicopter that crashed in Afghanistan that killed 38 people in August 2011. The book focused on clearing up the mysteries and conspiracy theories of the disaster and claims to be the first full account of the Extortion 17 story.

Darack interviewed around 60 people to create a full picture of the story.

“It was the greatest single incident of loss of life in the Afghanistan war,” Darack said. “A lot of news reporters we’re inaccurate and based on misguided questions. There was a lot of misinformation, there was a big story to be told (here).”

In order to write an in-depth military story, Darack talked more with experts in specific topics, like helicopter engines, than going through public affairs. According to Darack, public affairs can sometimes give either vague information or misinformation in order to protect secret operations, which results in a skewed story given to the public.

Dan Campbell, a sophomore studying journalism and a Marine Corps veteran, agrees with this sentiment. As both a journalism major and a veteran, Campbell said he understood the purpose of this lack of detailed information for the public but thinks the facts should be accurate.

“Public affairs is going to play it safe,” Campbell said. “I don’t think they go out of their way to give misinformation, I think that they’re just vague.”

Before writing about the military, Darack studied physical geography at the University of California at Davis. After spending time with training, he decided to accept their invitation to go to Afghanistan. Darack was at first really interested in the war in Afghanistan, but after his experiences, his interests shifted more towards the Marines, and he joined them in Iraq.

“It’s like detective work,” Darack said. “I get to put pieces of a puzzle together and compose a narrative, and the editors chew it all up.”

Darack’s talk was enjoyed by those who listened, even those who were not studying journalism. Kit Fowler, a senior studying human development and family studies, has seen Darack speak twice now.

“I really like his willingness and drive to be so close to such danger,” Fowler said. “He’s seen so much of our world on a different level than the average person gets to see.”