Martha Nussbaum discusses “Anger, Powerlessness and the Politics of Blame” as part of CSU Ethics Colloquium 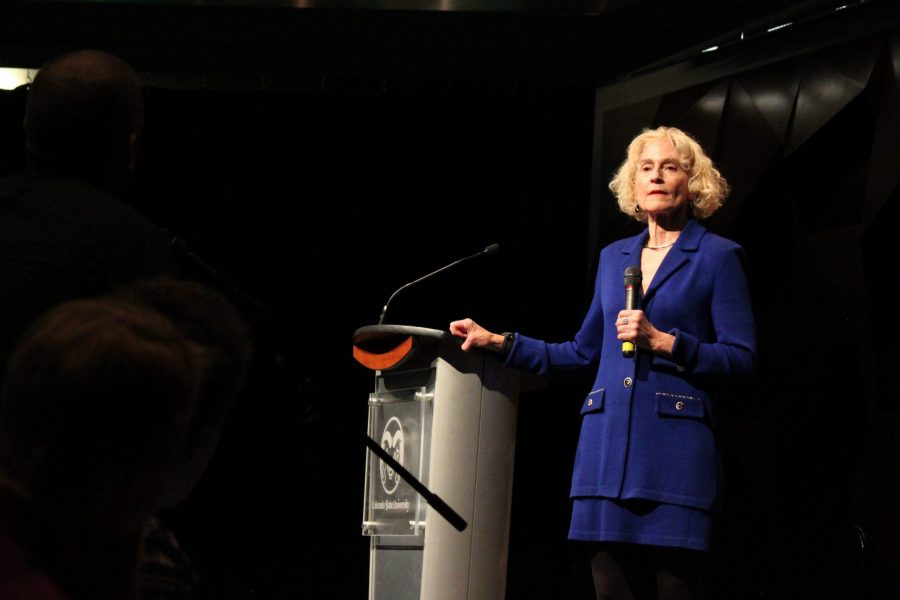 In 2017, there are perhaps few topics more relevant to public discourse as anger, powerlessness and the politics of blame, yet Professor Martha Nussbaum argues that these ethical issues pervade through history and human nature.

Nussbaum discussed these topics in one of two talks, aptly titled “Anger, Powerlessness and the Politics of Blame,” given as part of the Colorado State University Provost’s Ethics Colloquium Nov. 10 in the Lory Student Center Theater.

Intended to promote cross-disciplinary, cross-college conversations about ethics-related issues, the colloquium highlights existing ethics seminars and activities, encourages additional events, such as Nussbaum’s talks, and provides virtual resources for faculty and staff members working with an ethical perspective on issues facing the community, according to Ethics at CSU.

CSU Provost and Executive Vice President Rick Miranda said that the Ethics Colloquium was in part inspired by the University’s concern in upgrading responsible conduct in research and ethics in the University curriculum.

“This series has been active for a year or two, and to be honest, it’s been primarily sponsoring or assisting with departmental and college events,” Miranda said. “(This) is our first major event that’s sponsored by the series itself.”

Miranda said that it was an honor to have Nussbaum speak as the series’ first major independent event.

“I’m very happy to be part of the ethics initiative because I do really believe that philosophy plays a central role in that,” Nussbaum said.

Nussbaum, an American philosopher, is the Ernst Freund Distinguished Service Professor of Law and Ethics at the University of Chicago. She has also been named the 2017 Jefferson Lecturer in Humanities and a 2016 Kyoto Prize Laureate in Arts and Philosophy.

Throughout her speech, Nussbaum provided examples of the role of anger in that in historical contexts, from the Greeks to nonviolent movements such as those of Gandhi, Martin Luther King Jr. and Nelson Mandela.

“I believe the Greeks and the Romans are right: anger is a poison to democratic politics, and it is all the worse when, as so often, it is fueled by a lurking fear and a sense of helplessness,” Nussbaum said.

Nussbaum also said the prevalence of anger as a product of fear rooted in human psychology from infancy. She said this results in retribution and payback becoming quintessential human strategies.

“We all know people today who are obsessed with what other people think of them, who constantly scan social media to see who’s been insulting them,” Nussbaum said. “Social media certainly encourages this obsession as people diss each other, count the number of likes some post of theirs has garnered and so on.”

Nussbaum said this demonstrates how misguided anger can be and advocated for protest without payback. Using King as an example, she said anger can be transformed into work and hope to promote change.

“Democracy must give up the empty and destructive thought of retributive payback and move towards a legal justice and human wellbeing,” Nussbaum said. “People may think anger can be powerful, but it always gets out of hand and turns back on us … we’ll always defeat ourselves so long as we let ourselves be governed by fear, anger and the politics of blame.”

Andrea Vail, a senior political science major, said Nussbaum’s speech prompted her to question how to reconcile the truth about anger in a society where anyone can have their own truth today.

“It was nice to see a woman who’s so educated speak about something young girls don’t often get,” Vail said.

Vail’s sister Jacquelynn, a criminal law major, agreed that hearing a woman speak on this politically relevant topic was inspirational.

“It was an honor to see the professor today because she’s somebody who I’ve looked up to for a long time,” Jacquelynn Vail said. “The topic is really what drew me in because it didn’t focus so much on our current political environment, however with the undertones of what she was mentioning, it’s helpful to a lot of people … to still see hope in the world and how we can move forward.”