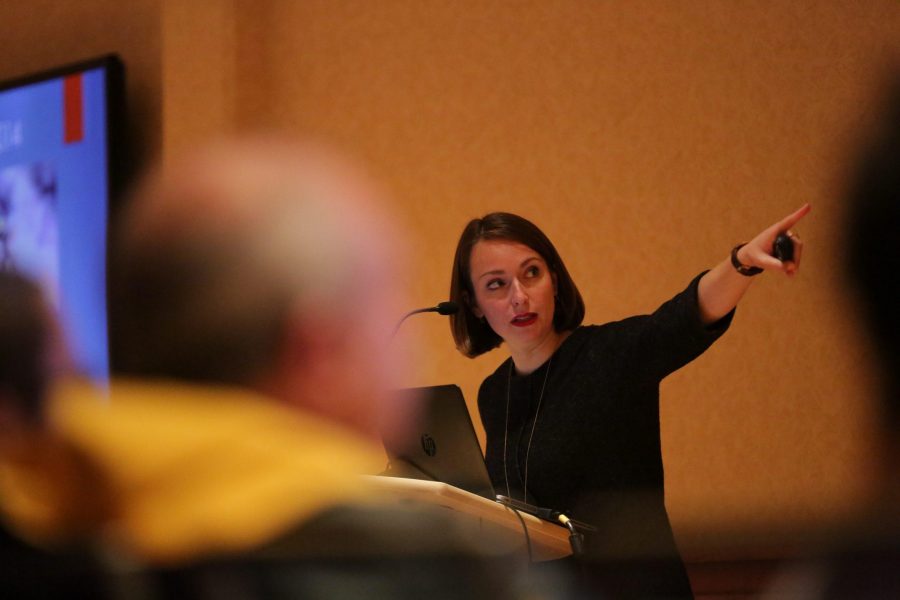 Julia Ioffe speaks during her analytical presentation of "What Does Russia Want?" at the Lory Student Center on Tuesday evening. (Forrest Czarnecki | The Collegian)

Julia Ioffe never intended to be an expert on Russia, but her knowledge of Soviet history has allowed her to report on relations between Russia and the United States for various publications.

Ioffe, currently a U.S. politics, national security and foreign policy reporter for The Atlantic, discussed Russia’s involvement in the 2016 U.S. election during the “What Russia Wants” event Tuesday evening at Colorado State University.

Ioffe said it is a proven fact that Russia interfered with the election, but how much influence they had has not been determined.

According to Ioffe, people allow their personal politics to influence their decision about Russia’s involvement.

“People start with the politics then look at the facts of what happened either because they want Trump out of office tomorrow or because you think that Trump was elected completely legitimately and this was just a democratic ruse to get him out of office as opposed to looking at what actually happened separately from the politics of it,” Ioffe said.

Ioffe said the focus on Russia’s involvement with Trump’s election distracts from problems in America that allowed him to win.

Ioffe said Russia originally did not promote Donald Trump but were promoting anybody that was not Hillary Clinton, including candidates such as Bernie Sanders and Jill Stein.

According to Ioffe, the Russians only intended to weaken Hillary Clinton’s campaign and did not expect Trump to win.

“They thought it was all sown up for Hillary and that they would just weaken her going in, and she wouldn’t be as hawkish towards the Russians as she would have wanted to be,” Ioffe said. “Trump winning was a huge surprise for them, and I don’t think they’re very happy with how it’s turned out. Things have only gotten worse for them. Because of their meddling, because it has been uncovered, anything Russian is completely radioactive.”