‘It’s okay to be white’ signs posted across CSU campus 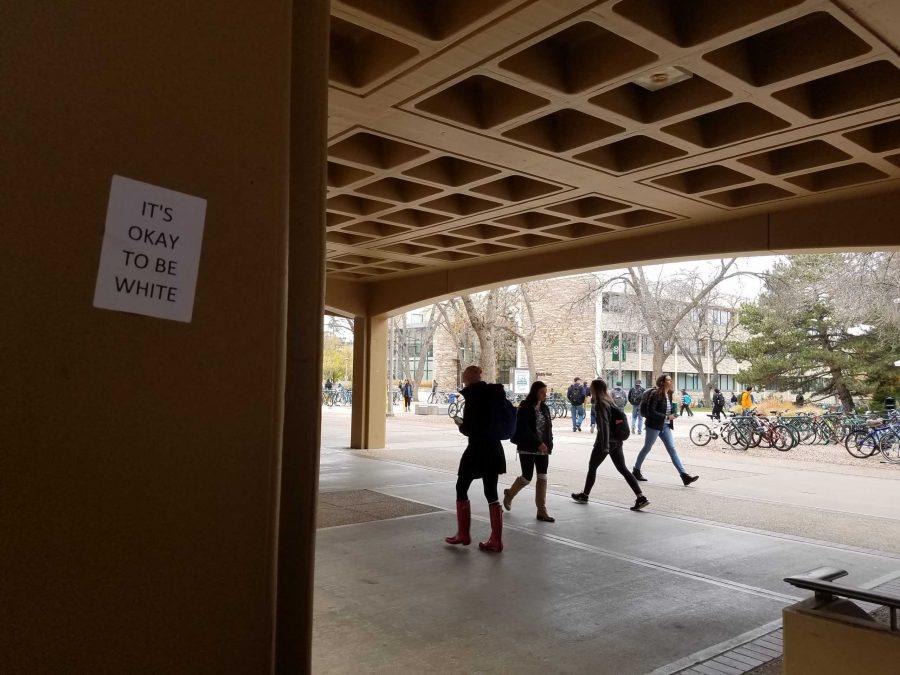 Several signs with the phrase, "It's okay to be white" have appeared on campus. This one, hung on a pillar underneath Clark B, is one of few not yet removed by students or members of the community. (Mikaela Rodenbaugh | Collegian)

Colorado State University is in the process of removing the “It’s okay to be white” posters.

According to Dell Rae Ciaravola, CSU’s public safety and risk communications manager, the posters are being removed because they do not adhere to the University’s poster policy.

“It’s okay to be white” papers and stickers were plastered sparingly across campus Monday morning. Students at Colorado State University are in the process of taking them down.

Signs with the same message have appeared on college campuses and at high schools across the United States, according to The Washington Post.

The papers and stickers were found taped or stuck onto structures like the Newton’s sculpture on the south side of campus and underneath Clark B. Since then, students have been cleaning them off the structures or ripping them off.

One student taking down one of the posters, who wished to remain anonymous, stated he did not know what the signs were for, but had a suspicion that the message had something to do with white supremacy and wanted to take down the signs.

According to the Washington Post, “It’s okay to be white” originated on ‘4chan’, an online platform and chat room, as a suggestion meant to create distrust in the media, because there would be speculation about the meaning behind the posters. The posters found at high schools and on university campuses are a way of recruiting students into white nationalist groups, which have increased in recruitment activity since the 2016 election, the Post wrote.

“News reports would draw attention to the posters, the writer behind the idea predicted,” according to the Post article. “Then white Americans derisively referred to as ‘normies’ in the white nationalist ecosphere will discover that American journalists and ‘lefties’ hate white people. In the process, normies will stop regarding news outlets as credible.”