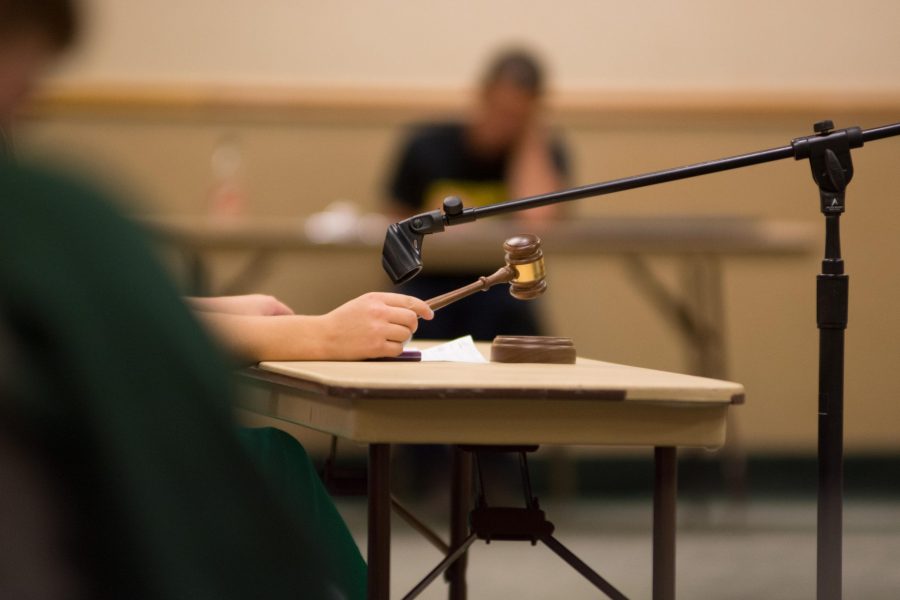 The gavel used in the CSU political debate on Oct. 26, 2017 in the LSC. (Colin Shepherd | Collegian)

Matthew Yohannes and Peter Constas, two Colorado State University first year students who have been friends since their freshman year of high school, noticed something was missing when they looked at campus clubs and activities during freshman orientation: there was no speech and debate club.

“Almost every college, especially university, has a speech and debate team, and we come from a high school that’s pretty heavy on speech and debate,” Constas said. “I think the day of orientation, before classes even started, we went to the SLiCE office and we said, ‘Okay, how do we start this team?’ And they gave us three sources and it just grew from there.”

Last night, only a few months after they initially visited the SLiCE office, Yohannes and Constas were sharing information to a group of students in a small Clark C-wing classroom about their newly formed club, the Speech and Debate Club.

“Public speaking is a very valuable skill, in addition to a lot of other skills that speech and debate provides in terms of leadership skills and camaraderie,” Yohannes said.

Most recently, a parliamentary debate team that was formed in 2013 met the same fate when it was forced to disband not long after its formation.

Even with this knowledge, Yohannes and Constas decided to create their own club.

“It was so, so hard,” Yohannes said. “We went to the SLiCE office, they gave us a checklist of things to become a registered student organization. And it took us around two months to get that checklist completed. I don’t think we finished it until maybe October.”

Yohannes and Constas were required to watch hour-long videos and take tests on them. Then they needed to create a constitution for their club which included former and new amendments.

After this, Yohannes and Constas needed to set up a clear election system, maintain a certain amount of club members and set up a Student Organization Funding Account for fundraising.

Additionally, the first advisor Yohannes and Constas found dropped their position, but they have since successfully found another advisor.

“My personal struggle was doing all of this on top of class work,” Yohannes said. “It was just really hard for me to do. But I was really passionate about this and I knew I had to do this anyway.”

In evaluating their past experiences with high school speech and debate, Yohannes and Constas are determined to create a club that not only offers friendship opportunities, but a club environment where members are free to think about their own beliefs, evaluate them, learn new beliefs and perspectives, and engage with other members in confidence.

“It’s probably one of the most accepting environments,” Constas said. “You can just be yourself. Some of the best friends I have are still

Student who are looking to join the Speech and Debate Club can contact csuforensics@gmail.com for more information.

Collegian reporter Matt Bailey can be reached at news@collegian.com or on @mattnes1999.