Dr. Susana Muñoz presents on how to support undocumented students at CSU 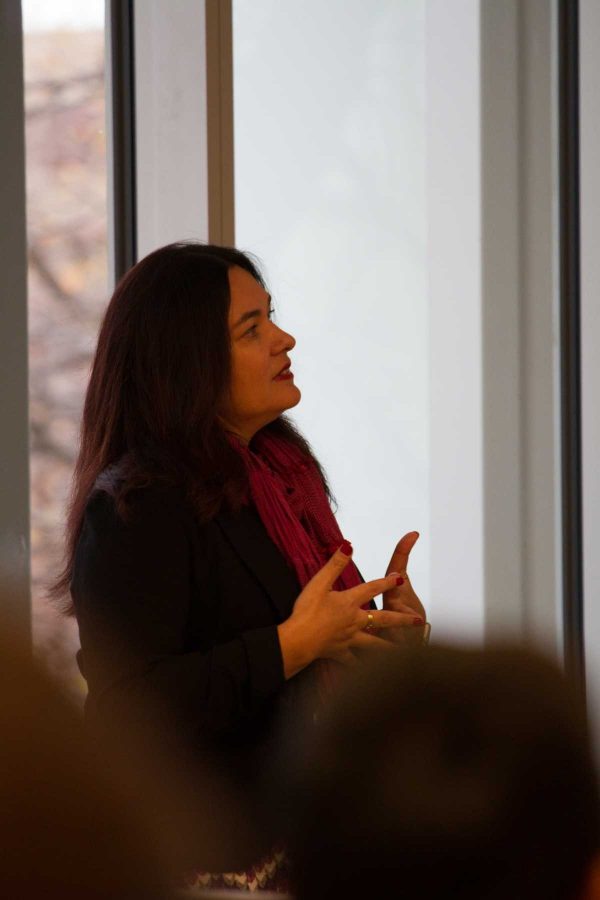 Dr. Susana Muñoz spoke on issues of inequality and unfair treatment to underserved student populations in higher education at the Interrogating Legality and Campus Climate speech on Wednesday, November 15, 2017. She leads a group of researchers looking into this issue and the way that underserved students can be effected by new legislations that have been passed. (Josh Schroeder | Collegian)

Educational institutions have been forced to attend to their undocumented students with the end of Deferred Action for Childhood Arrivals.

Susana Muñoz, an assistant professor of higher education at Colorado State University who focuses her research on issues of access, equity and college persistence for undocumented students, presented how undocumented and DACA students experience institutional legal violence in Colorado at the Lory Student Center on Wednesday, Nov. 15.

DACA was a policy established by the Obama administration in 2012, protecting individuals who entered or remained in the country illegally from deportation and allowing them to study and work in the United States. It was rescinded by the Trump administration in this past September.

Muñoz, who was born in Mexico and arrived to the United States when she was 6 years old and received citizenship at 10, is concerned about  how individuals are not able to get citizenship at this time because of the changed system.

Muñoz introduced a finding from a UndocuScholars Project by UCLA, which she said stunned her. The finding states that out of 900 participants, the majority said they experienced isolation on campus and unfair treatment due to their legal status, and had anxiety scores above the clinical cut off level.

“This is becoming much of a public health issue as it is a color justice and discrimination issue,” Muñoz said.

Muñoz said while there are bills in place that allow students to pay in-state tuition and receive financial aid, such as The Colorado Advancing Student for a Stronger Economy Tomorrow bill which was passed in 2013. But Muñoz said Colorado is not perfect in accommodating undocumented and DACA students.

“We’ve actually been gone through a (in-state resident tuition) ban and gone through a requirement for undocumented students to show proof or lawful presence,” Muñoz said. “A lot of how this is all passed is through the ideology of our legislator.”

Muñoz reported that there were an estimated 180,000 undocumented immigrants in Colorado and 19,950 of which are 5-18 years old. In Colorado, immigrant population has grown by 34 percent from 2000-2010, according to the Western Interstate Commission of Higher Education.

Muñoz centers her research around interviewing undocumented students, faculty and staff at universities about their campus climate. In recent years, she examined a public and private institution. Currently, she is organizing focus groups about the political climate. Her findings from student voices indicate that they experienced institutional ignorance, pervasive invisibility, discrimination and lack of support.  One student she interviewed, named Ricardo, said the school did not have an attitude toward undocumented students, and that invisibility is worse than hate.

“It’s this notion that because they are invisible, they are dehumanized, they are not seen as a person, they are robbing them of their personhood,” Muñoz said.

Muñoz also talked about the voice from faculty who revealed their desire of doing what is morally right, but they can only help with the support from people in a high position.

Based on all these findings, Muñoz recommended to mandate statewide training for college administrators on how to support undocumented students, offer specific trainings to faculty members regarding legal violence undocumented students experience, allocate institutional funding to hire at least one full-time employee to coordinate academic and social support efforts and place resources and helpful information on the university’s website.

Muñoz urged CSU faculty to think about inclusion policies that have been vetted by their institution and place them on their syllabus but to also have conversations about how to dialogue with civility in the classroom.

Leanna Biddle, career educator manager for the career center, said Muñoz’s presentation is an important conversation CSU should be having.

“In my role, we have to be knowledgeable and aware of our campus climate, and provide a safe space for undocumented on campus,” Biddle said. “There are steps that should be taken to educate the larger population. This presentation was a great example of that.”

“It’s good to hear from a research which echoes students’ perspectives on which they go through in high institution. Because often times we don’t understand undocumented students,” Addo said.