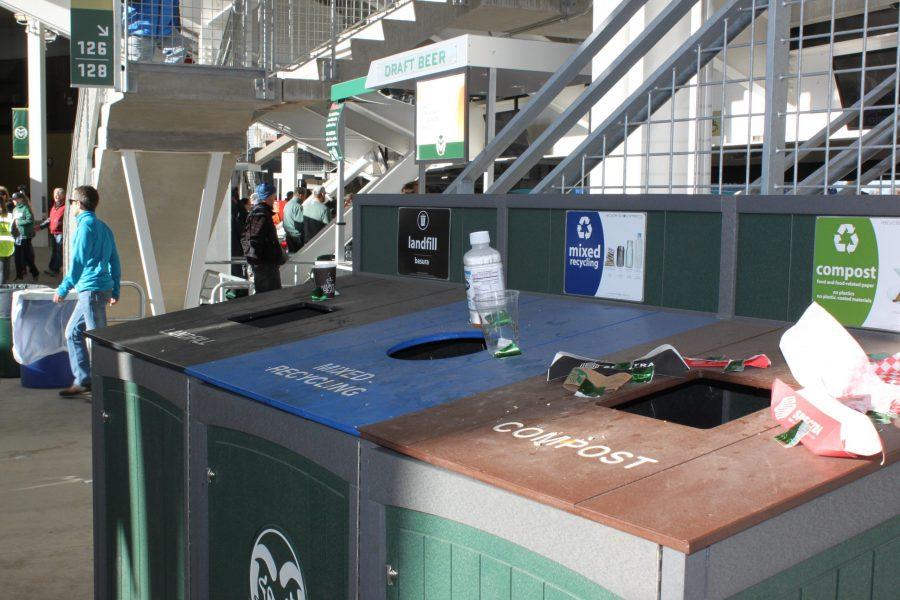 Examples of compost, mixed recycling and things that go to the landfill sit on top of the assorted bins to show fans how to separate their trash. (Brandon Mendoza| Collegian)

Colorado State University’s on-campus stadium is equipped with compost and recycling bins, and the Zero Waste Team makes sure those bins actually fulfill their purpose.

During home games, football fans can find members of the Zero Waste Team lining the stadium in front of bins that hold trash, recycling and compost materials.

The team helps people place their waste into the correct slots, and they sort through the waste with gloves to pull out anything that was misplaced to prevent recyclable and compostable materials from going to a landfill.

Having bins for recycling and compost does not necessarily mean the materials will be diverted from a landfill.

During the first home game of the season, all of the compostable material in the bins were contaminated with regular trash, according to Zero Waste Team member Maggie Gilman, because after the game ended, the team left and the custodial crew took over who combined compost with trash. All of it went to a landfill.

The Zero Waste Team has since tried to prevent this from happening. When CSU played the University of Nevada, the group successfully collected 843 pounds of compostable material and 4,980 pounds of recyclables, according to Sheela Backen, CSU’s integrated solid waste program manager.

In the latest game against the Air Force Academy, the crew collected 5,124 pounds of recycling but took a step backwards with compost at only 144 pounds. Backen said that part of the compostable material ended up in the trash due to confusion with the custodial staff, a problem similar to the first game, but still hopes to reduce the amount of waste CSU produces.

“My goal for (the) campus has always been to lead to zero waste or as near as we can get to zero waste,” Backen said.

Backen said the new on-campus stadium is striving to reach a gold certification from Leadership in Energy and Environmental Design. Currently, 20 bins are located around the stadium to collect compost and recycling materials.

To reach LEED gold, Backen said fans need to be aware of where to put their waste.

“The main thing is letting the attendees know that we are trying to be zero waste,” Backen said. “They need to come to the bins that have the three stations, where we can help them put (their waste) into the correct bins.”

Gilman said she gives facilities management credit for the work they have done in creating the infrastructure to accommodate zero waste games but feels the team is limited in several ways.

“We don’t have any large power into making the education of what is compostable and recyclable actually effective,” Gilman said. “We haven’t had the ability to make a public announcement that is played over the intercom or a video.”

“They aren’t paid or told to make sure (compost) is clean or care if it’s clean, and somehow that means our roles are clashing,” Gilman said.

The Zero Waste Team is comprised of around 20 volunteers who can be at football games for up to six hours, according to Gillman.

“We have a composting facility, so we should be utilizing it more,” Halligan said.

The new CSU-owned composting facility is able to process any organic material generated on campus, according to Gilman. And with the addition of the food waste bins within the stadium where fans can sort their waste, the new on-campus stadium has the means of becoming waste free.

Gilman, however, is unsure if anything would have been processed correctly had it not been for the Zero Waste Team.

“The stadium, without the Zero Waste Team, was going to get credit for having compost collection by having those bins,” Gilman said. “Would there be clean compost diverted? Would any (of it) get diverted? It’s hard to say.”

Collegian reporter Ty Betts can be reached at news@collegian.com or on Twitter @TyBetts9.