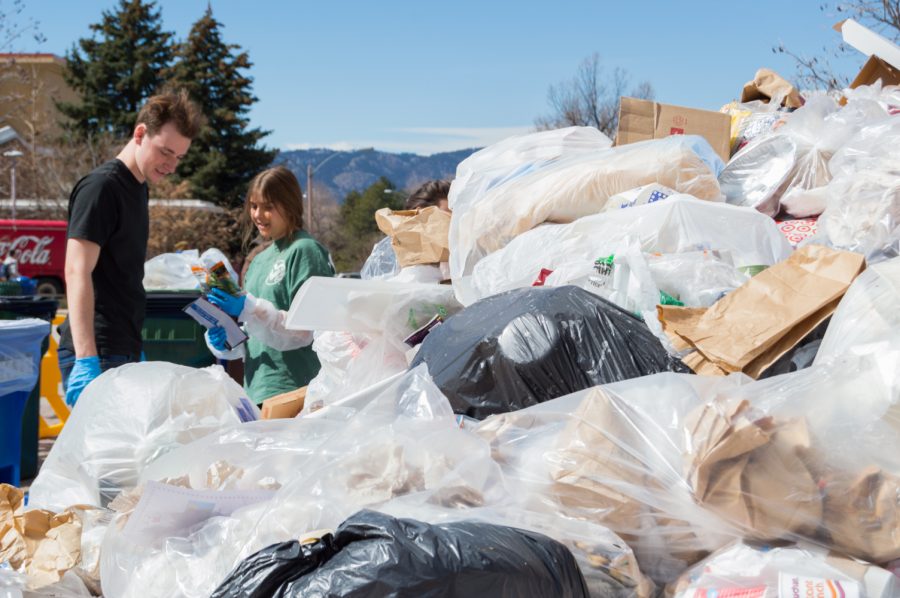 Drew Bell and Abby Fournier participate in the Food Waste Audit on the plaza Wednesday morning to promote enivronmental practices like recycling and composting. Photo by Kaitlyn Ancell | Collegian

Colorado State University is setting a goal of ensuring “zero waste” for football games at the new stadium, and expending efforts to reach their goal.

Zero waste football games were held once a year for the Aggie Game. Zero waste eliminates the volume of discarded waste and reuses the resources.

Facilities Management, working with the CSU Zero Waste Team, is devoted to wasting nothing for all football games at the new stadium this year, according to Sheela Backen, the Integrated Solid Waste manager for CSU.

“We have added compost bins to mixed recycling and landfill bins which we already have at the stadium, and we have some people to stand there to tell people where to put waste,” Backen said.

These bins form twenty zero waste stations on game days and at least twenty volunteers are needed. Volunteers guide attendees to the stations and educate them on properly sorting.

The volunteers arrive at the game two hours to learn about the waste stream produced at games and how to sort the waste. They stay for the whole game to teach attendees and keep working on managing, picking out and sorting the bins after games to ensure diverting clean streams.

The CSU Zero Waste Team works to recruit volunteers. The team consists of a small group of students who volunteer their time with the goal of creating as much waste diversion as possible, according to Maggie Gilman, a junior human dimensions of natural resources major who leads the CSU Zero Waste Team. The team spent over 200 hours working without pay so far this season.

“For the following football games, our team will make sure that we are as close to zero waste as possible by increasing compost collection,” Gilman said. “To do this, we will have more interactions with fans, decrease the amount of stand-alone trash bins throughout the stadium and make sure that recycling is done properly.”

In addition to the efforts from the CSU Zero Waste Team, Ram Sports Properties is donating all compostable materials. An announcement at the stadium tells people they can ease waste by directing them to the compost bins.

Backen discussed the difference between zero waste football games and the Ram Welcome Parents and Families Picnic, which is also a zero waste event.

“There was only one place to bring your trash at the picnic, but now we have twenty stations (for waste at the stadium),” Backen said.

Almost everything at the picnic was compostable, as Housing and Dining Services put labels on them as a way of informing people. Not all products brought into the stadium on gamedays are compostable, which makes diversion difficult, according to Gilman.

“We would love to see increased support from the main food vendor,” Gilman said. “Hopefully, they could provide fans all compostable food wear including utensils, any wax paper or trays that are used.”

Gilman also emphasized the importance of further planning, supporting resources and public education and outreach for CSU to ensure that any events can be zero waste, or close to it.

Backen said the stadium is on track to match other sustainable University buildings.

“The stadium is going for LEED Gold, which means that we have to recycle and compost everything that we can,” Backen said.