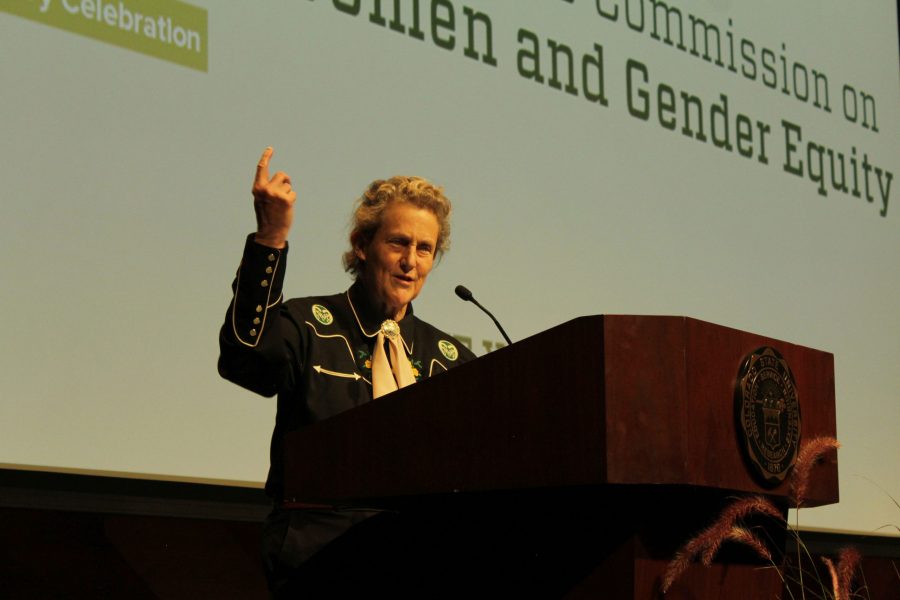 Renowned CSU Animal Science professor Temple Grandin was the keynote speaker at the President's Commission on Women and Gender Equity celebration. "When doors of opportunities come, you've got to have guts to go through those doors," Grandin said in her address. (Sarah Ehrlich |Collegian)

Colorado State University has fought for years to remove the limitations of culturally-defined sex roles women face and continue to face.

Established by President Albert C. Yates in 1997, the President’s Commission on Women and Gender Equity celebrated their 20th anniversary Tuesday night in the Lory Student Center Theater to reflect on the past, present and future.

President Tony Frank listed some of progresses which CSU has made in the past twenty years such as increasing the gender diversity dramatically, setting up a bachelor degree program in women’s and gender studies, making improvements on parental leave and dealing with the sexual violence. Yet, Frank said, “we’ve got not only progress we can point to, but steps ahead us we can see.”

According to Frank, CSU is facing cultural changes which are difficult and complex, but also the most important thing for the University. This 2oth celebration is a pivot point to lean in culture changes and to make more differences. Steps to move forward include building a sense of emergence and a guiding coalition, according to Frank.

Sue James, the chair of the Commission on Women and Gender Equity, started the event by pointing out that, although CSU still has a lot of work to do and will keep working, “it’s important to celebrate our successes, to draw attention to and highlight the battles we fought and won along the way” because this campus is a much better place for women than it was twenty years ago.

James used her personal experience as an example. When she gave birth to two children seventeen and twenty years ago, there was no parental leave policy for faculty at CSU.

“We are going to celebrate today, and we will keep doing the hard work in front of us,” James said.

James also gave thanks to all presidents, staffs and students who stood up and called for changes to create a better climate for women and showed a video on how women equality at CSU has progressed throughout history.

Frank introduced the keynote speaker, Temple Grandin, a renowned professor of animal sciences at CSU and anauthor and speaker on autism and animal behavior. Being the only woman working in the field of autism in 1970s, she faced great obstacles and discrimination.

Grandin used her own story to encourage women to be the best they can be, walk out the door bravely to catch opportunities and sell your work rather than sell yourself.

“Woman can do just as well as men,” Grandin said.

James ended the event by using the symbol of a “glass ceiling.”

“When I was on my first commission meeting almost two decades ago, the glass ceiling is so far above my head and our heads that we couldn’t even see it,” James said. “But, today it is right here. We’re breaking through the ceiling, but we are not through it yet.”

Jairson Ascencao, a freshman majoring in business, was impressed by the anniversary.

“It’s wonderful to hear how far has this school gone since it started and so much work we have done,” Ascencao said.

“It’s meaningful for Tony Frank here to support this event. It is powerful,” Mason said. “I think the ambitions and goals and necessary items we need to address are great. We’ve got the whole university behind it, not just a small group focus on and to be passionate about it.”

Collegian news reporter Yixuan Xie can be reached at news@collegian.com or on Twitter @YixuanXie1.