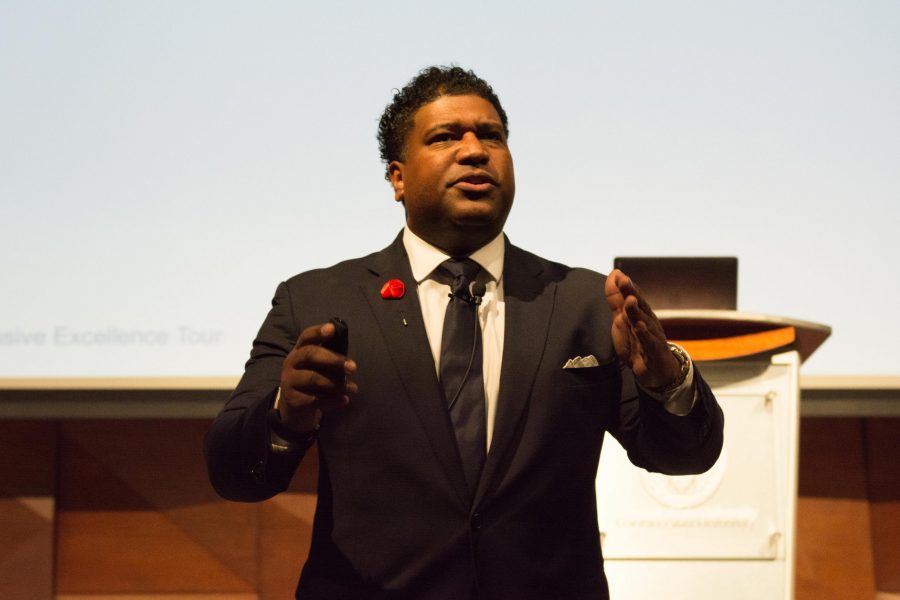 Before an institution can be considered excellent, it must be diverse and inclusive.

Speaking on how diversity can make institutions excellent in the Lory Student Center Theater, Damon A. Williams was the final keynote speaker for the Diversity Symposium at Colorado State University on Friday, Sept. 29.

During his talk, Williams addressed how universities face challenges with diversity because they tend to be resistant to change, are comprised of tenured faculty and staff and have trouble making change that is deep or transformative, he said.

However, these institutions are now home to the most diverse group of students ever. This diversity includes religion, sexuality, race and many other distinctions. With this diversity, institutions have the ability to be excellent, Williams said.

“When we take all that diversity and all those reasons why and they are so important, that’s why college universities really have to think about their inclusion agenda as a part of their excellence agenda and being relevant to the world we live in today,” Williams said

Some innovations that Williams suggests are teaching classes on subjects that are relevant to our culture such as Drake or the Kardashian family and their impact on culture.

Universities can also make lasting change to create diversity by implementing accountability, incentives, infrastructure and resources. This growth must be spearheaded by courageous leaders who challenge the status quo, Williams said.

“Each and every leader has to find spaces where they are passionate,” Williams said.

Although there will be change from active leadership, there is no “magical bullet of diversity,” the process is slow and frustrating, Williams said.

After 17 years, the symposium has evolved since its creation. Starting out as the one-day Diversity Summit, which was only open to select groups around campus, the Diversity Symposium grew this year to include 56 sessions, four keynote speakers, over 120 presenters and over 40 volunteers, according to Alicia Sprague, training coordinator for the Office of the Vice President for Diversity.

“Diversity inclusion is something that touches on every single facet of our lives and every discipline that CSU has,” Sprague said.

Williams, who coined the idea of an “inclusive excellence,” was chosen to be one of the keynote speakers due to his innovative work with diversity. CSU itself has used his work in their diversity initiatives.

“A lot of our work here is based on the model that he helped to create, so it’s pretty neat to be able to bring him in to campus and to help us really kick off these larger efforts to make our campus more welcoming and inclusive for everyone,” Sprague said.

Williams holds a doctorate in organizational behavior and management. Williams has served as the senior vice president of the Boys and Girls Club of America and founded the Division of Diversity, Equity, and Educational Achievement and was vice provost and chief diversity officer at the University of Wisconsin, Madison. He authored “Strategic Diversity Leadership: Activating Change and Transformation In Higher Education.”

Williams embraces social media communication as a strength coming out of the centennial and millennial generation. He always tweets #StrategicDiversityLeadership and #InclusiveExcellence and has a YouTube channel, he said. He posed with students after the talk, encouraging some to take a selfie with him.

Maria Fernandez-Gimenez is a professor of forest and rangeland stewardship at CSU. She is currently working on in the department and in her professional scientific association to cultivate diversity.

“It’s really inspiring and helpful to hear someone who has clearly such a deep understanding and experience and who also can communicate in a very engaging way,” Fernandez-Gimenez said. “He is real and also hopeful.”

Collegian reporter Zoe Jennings can be reached at news@collegian.com or on Twitter @zoe_jennings4.