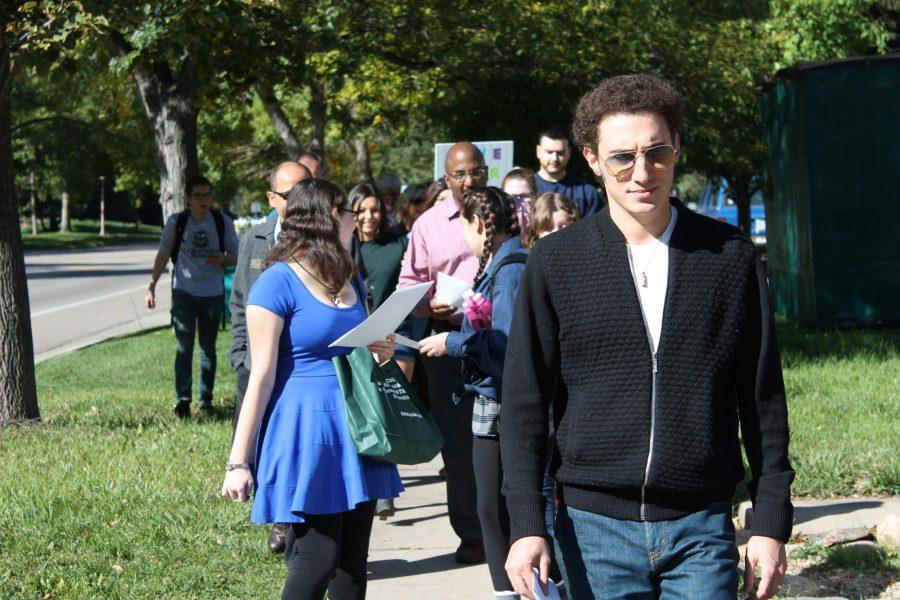 After writing a message about the Jewish New Year on her dorm door’s whiteboard in  Laurel Village, Colorado State University freshman Hannah Kramer came back to a shocking addition: Written on her door, someone wrote, “Heil Hitler.”

“I did not expect anything like that when I got up to campus,” said Kramer, a biochemistry major. “…I don’t like the fact that I may or may not be living in a hall with someone who wants me dead. I just went into my room and cried.”

Today, CSU Hillel, students and faculty members marched to the Lory Student Center and sang in solidarity against anti-Semitism on campus. Once arriving to the LSC Plaza, they sang songs and community members spoke. John Henderson, CSU assistant dean of students, apologized for the incident and offered support before marching.

“I wish I could say we were at a time where these events wouldn’t happen,” Henderson said.

Members of the Jewish community are singing and marching in response to recent antisemitism events at CSU @CSUCollegian @CSUHillel pic.twitter.com/GtTMI0M9CE

Other CSU faculty made appearances including including Blanche Hughes, the vice president of student affairs.

“I think what really surprised me about the situation was how positive she (Kramer) was, how she wanted to positively do something about it. That’s what caught me by surprise,” Amchislavskiy said. “There have been incidents in the past, and what I usually see from the students is more anger. It was good to see these positive intentions from her.”

Kramer said she was happy with the response from CSU and feels supported. She said many people reached out to her, including CSU President Tony Frank.

“I did not expect to get this much of a turnout here, and am just so thankful to everyone who showed up and are there to support me and to support our Jewish community,” Kramer said.

Collegian reporter Seth Bodine can be reached at news@collegian.com or on Twitter @sbodine120.