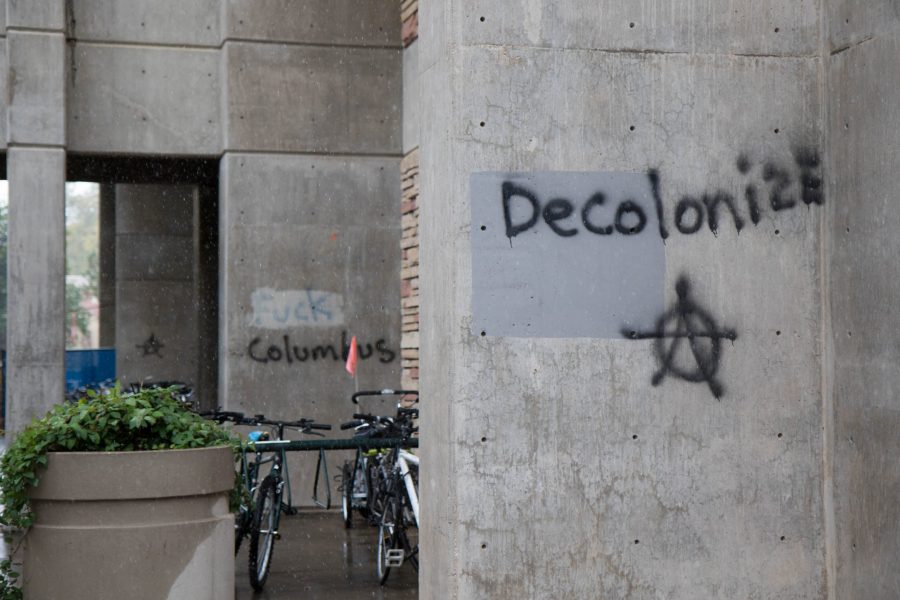 On Columbus Day, Oct.9, graffiti with the word “decolonize” and the anarchist symbol was found on various buildings at Colorado State University.

The cost for damages is more than $10,000 and it will take Facilities Management until the end of October to have all the graffiti covered up, according to CSU Senior Communications Coordinator Dell Rae Ciaravola.

However, Joon K. Kim, professor and chair of CSU’s ethnic studies department pointed out that celebrating Columbus Day is problematic.

“This idea of discovering a new world comes from the perspective of the colonizer, people who went to other places, decided to claim their land as their own and brought about changes in the process which a lot of native Americans perished through genocide, and through cultural impact as well,” Kim said.

“People are trying to honor the fact that native indigenous populations were already living in this place,” Kim said.

“The ‘decolonize’, if I had to guess the message, would be that this group feels that CSU, Fort Collins, the state of Colorado – some combination thereof has not done enough to distance itself from the legacy of Christopher Columbus,” Hitt said.

Hitt spoke about how he felt about the actions of the student groups.

“There are a lot of ways that people can protest, I think one thing to keep in mind is that you need to have a specific concrete action that you want people in positions of authority to be able to take on your behalf,” Hitt said. “What should Tony Frank do because of this? It’s not clear to me. So without specific request, those graffiti are a great way to vent frustration at the status quo and a poor way to actually communicate to people in positions of authority what kind of positive changes you would like to see.”

In response to incidents like this, more faculty should stand together with students and other people that are immediately affected by it, according to Kim.

“Because there are so few minority faculty and students on this campus, they feel especially vulnerable,” Kim said. “But it’s not enough to just have resources for the affected population. Because these issues are not just issues for the minorities students that are affected, but should impact all students and all faculties. We need resources to be able to educate the rest of the students as well.”

The CSU Police Department believes that it is the same people who are responsible for the graffiti on campus and for similar graffiti in the city as well, according to CSUPD Chief Scott Harris.

“In regard to prevention, CSUPD regularly patrols campus on foot and by police car, bike and motorcycle, 24 hours a day, 365 days a year,” Harris said. “Officers specialize in identifying types of tagging and graffiti that occur across the city, and tracing graffiti to those who are responsible.

“The damage caused by graffiti and tagging is huge, which can total to thousands of dollars each year,” Harris said.

Harris expressed expectations for the public’s assistance by sharing information with police to help identify suspects, which is critical in holding those individuals accountable for the financial and aesthetic damage they caused.

CSUPD continues to ask for information regarding the people involved in painting the graffiti across campus. If people have any information about the incident, please call them at 970-491-6425.

Collegian reporter Yixuan Xie can be reached at news@collegian.com or on Twitter @yixuanxie1.