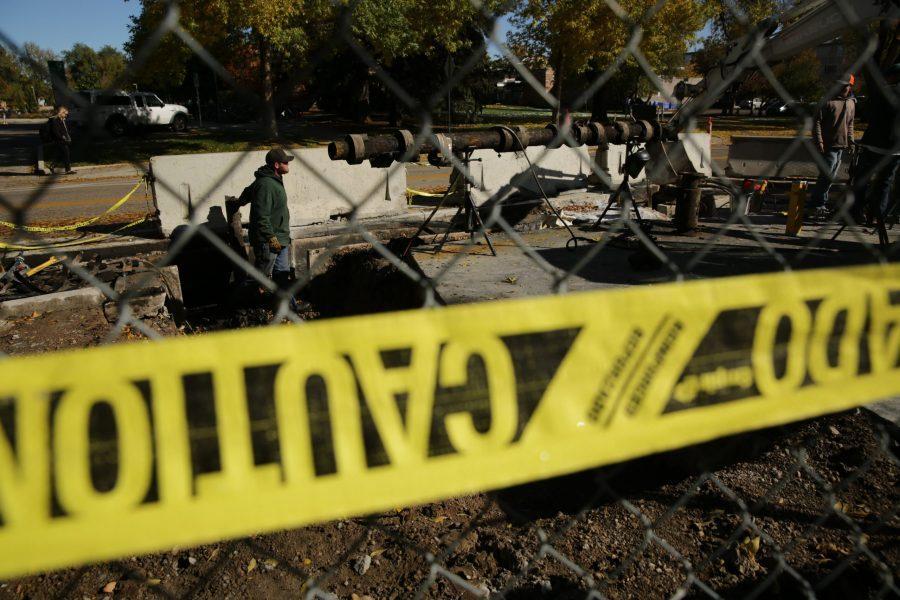 Construction workers and equipment is pictured along West Plum Street near the Colorado State University Transit Center on Tuesday morning. Workers were replacing and rerouting a condensation line underneath the roadway. (Forrest Czarnecki | The Collegian)

Construction projects continue to occur on the Colorado State University campus, including new buildings and renovations.

Students can expect a number of different construction projects to begin in coming years. Many buildings will gain additions to preexisting structures, there will be brand new buildings and some buildings will be torn down.

The Michael Smith Natural Resources addition to the Warner College building will add 37,4000 gross square foot to the existing building. The addition will have flipped classrooms, instructional laboratories, a Student Success Center, offices and meeting or collaboration spaces. The cost of the addition is $20.2 million, and is planned to be ready by fall of 2018.

According to an announcement published by Facilities Management concerning the building, the Warner college is currently on track to grow 30 percent in students over the next seven years. The announcement states students are “in need of collaborative space that inspires discovery, of innovative classrooms that expand learning opportunities, and a common place where they can work together.”

The National Western Center Health Education Outreach center will be an addition to the Anatomy and Zoology building and has a planned budget of $23.3 million.

This building addition will add 39,600 gross square feet to the existing building, and will include student study areas, an anatomy computer lab, a gross anatomy lab, a neuroanatomy lab, office space for an outreach coordinator, support spaces and cooler space.

Milton Brown, project manager for this addition, stated this project will provide students with some outreach education around human anatomy and neural anatomy.

The JBS Global Food Innovation Center, an addition to the CSU Animal Sciences building, is proposed to cost $20 to $21 million dollars and will add 38,000 gross square feet to the existing building.

This building addition is said to “create an integrated facility to provide hands-on instruction for students, which is currently lacking,” according to an announcement by Facilities Management. The addition will provide resources such as livestock handling, meat harvest processing and more.

Brown, also the project manager for the JBS building addition, stated buildings like this and the NWC Health Education Outreach Center are exciting from where he sits in his position.

“I think from a Project Manager standpoint it is always exciting to work with the user groups to provide the facilities that they need to keep their students educated for their future professions,” Brown said.

The Richardson Design Center, an all new structure for main campus, is planned to cost $16.5 to $20 million, and is envisioned to be part of a “larger ‘design district'” according to a plan given out by Facilities Management.

“The CSU Richardson Design Center will create opportunities for students from multiple disciplines to create, innovate and collaborate in an open and immersive design community,” according to the plan given by Facilities Management.

The plan for the Corbett and Parmelee dinning halls is to combine them into one dinning hall, as currently it has been a struggle trying to communicate that it is one cohesive dinning center, according to Laura Bently, project manager for the reconstruction.

By reconstructing the space, Bently believes it will provide a space that incorporates diversity and inclusion, while providing students in their educational endeavors with the resources they need to be successful on campus.

The renovations of the dining halls and kitchen will begin in March of 2018; lobby renovations will start in May of 2018. The entire process has a fixed design and construction budget of $8.5 million.

Fred Haberecht, the university master planner for Facilities Management, stated all of these projects will not get in the way of students getting around campus.

“For the most part they are all encapsulated in their sites,” Haberecht said, adding that none of the projects should impede student traffic around campus.

“(The new buildings and additions are) going to further the education of students,” said Beitler “It is a positive position to build more projects and help students with their education, and it will make CSU a better university than it currently is.”