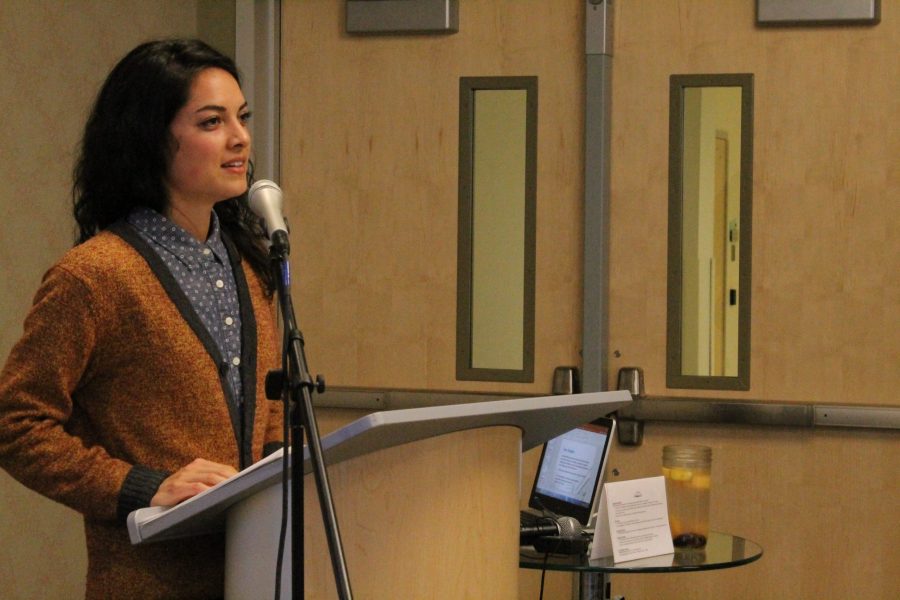 Cori Wong, an assistant professor with a concentration in identity and embodiment, speaks at the Boyer lecture and reception. (Abby Currie | Collegian)

The poets read their works related to gender and ethnicity, all of which depicted oppression they had experienced, a theme that was reiterated in Wong’s lecture. Souza said the Boyer lecture is intended to heighten understanding of the human experience.

This year, the department celebrates many achievements, including the launch of a women and gender studies degree, the introduction of a theories of gender and race class and the start of a new student initiative, the Women’s Studies Ambassadors program.

The event itself recognizes exceptional students and the legacy of Patsy Boyer, who made progress as a professor and advocate for gender studies at CSU.

“This is a reception where we celebrate undergraduate and graduate students who have received the Boyer scholarship for their outstanding work, both scholarly and as activists,” Souza said.

Wong’s lecture focused on her research studying positive philosophy and politics, a term she coined herself.

“As a feminist philosopher, my passion stems from doing theory in ways that challenge and change the status quo,” Wong said. “My feminist commitment to philosophy is an explicitly political project.”

Wong said her perspective on change centers around a strong calibration with critical thinking, reflection and theorization. She uses feminist theory as a means of navigation in subject matter typically associated with shame and oppression.

Under such circumstances of institutional intimidation, Wong said she has witnessed emotions of empowerment in the oppressed, as well as negative emotional responses.

However, Wong determined these negative feelings are also being expressed by the oppressors.

With that being said, Wong sees this more as an opportunity for growth, as she said she has seen enlightenment in her students’ developing positions.

“Even with the students of whiteness in my class, we practice positive philosophy to unpack privilege and challenge the ubiquity of whiteness while resisting the temptation to make righteous knowledge claims that would leave them feeling good in all the wrong ways,” Wong said.

Wong ended her lecture, noting positive philosophy as a useful tool for understanding between both the oppressed and the oppressors, the importance of excitement, empowerment, and humility in critical reflection and the establishment of support for these theoretical practices.