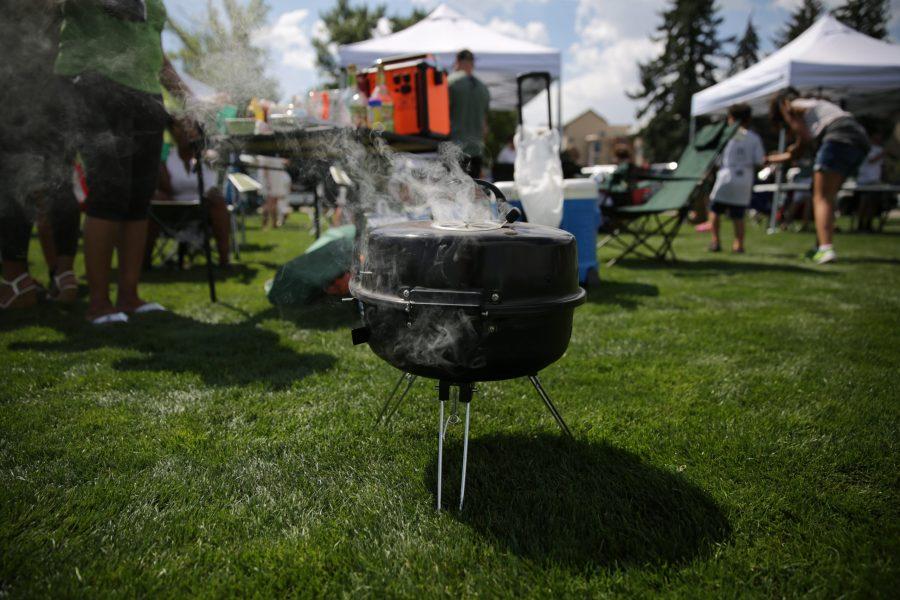 Hundreds of cars, trucks, trailers and students dotted the field adjacent to Hughes Stadium during tailgates before home football games last year. Now that the Colorado State football team plays at a new stadium on campus, however, attendance at ASCSU-held tailgates has been low as students are trying to figure out the new system of tailgating.

Students do not know about the on-campus ASCSU tailgates or do not participate in them, partially because of how the tailgates are promoted.

“I know that coming into the year, we didn’t have as much marketing for the lot as we wanted,” said Nathan Rhine, Director of University Affairs. “It’s clear that we have some changes to make and that if we want to reach more students, we need to find where we’re lacking, which students were not hitting enough, and how we can get that information out to them quicker and easier.”

“Word of mouth is going to be your best friend, and those who have experienced the student tailgating lot and know about this space are really going to be beneficial in getting the word spread to their fellow rams,” Wise said. “I really do think that the issue we’re having is just getting the word out there and I think that we’re really bringing that to the forefront of the conversation of how we get students to this tailgating lot.”

Senior Annie Ngo, a resident assistant from the southside of Braiden Hall, believes students do not participate in tailgates, because they have their own pre-game parties to attend.

“I think many students celebrate before the football game off-campus where they don’t have to worry about where to park or how to (get) transport to campus,” Ngo said. “It may not appear to be exciting when they can easily tailgate at their place with friends.”

However, a bigger reason students likely do not participate in on-campus tailgates is because of the change in location.

Hughes Stadium offered more space and there were not as many tailgating rules and regulations imposed on students. The current on-campus tailgates are spread out between the lot behind the TILT building, the Lory Student Center lot and The Mob area by the lagoon. Students are also required fill out applications for tailgating spots.

“At Hughes, you showed up, you got your spot, and that’s where everybody was,” Wise said. “But now we’re going with the typical, on-campus stadium university request where each lot is focused toward something different and you’ll find different departments (with) tailgating areas.”

After experiencing low attendance during the first two home-game tailgates, ASCSU has thought of new incentives to attract more students, and these ideas were applied to homecoming Saturday’s tailgate.

According to Wise, the results were noticeable.

“I was pretty impressed with the attendance,” Wise said. “There’s always room to improve … we had about 20 student groups, three of those being fraternity and sorority life groups, which is way up from the numbers that we’ve had the past two games.”

Dealing with cold weather and wind gusts, ASCSU attracted more students to Saturday’s tailgate by handing out free Forever Green shirts. ASCSU also applied for the Coca Cola grant and received 1,000 bottles of Coca Cola products, which were handed out to attendees.

According to Rhine, ASCSU will work with Greek Life in the future in order to re-introduce a Greek Row aspect on campus during gamedays which will hopefully boost attendance even more.

ASCSU also redesigned its whole marketing process since the beginning of the year.

“We’ll make some adjustments and try to reach out to as many students as possible,” Rhine said.

ASCSU currently approves 93 tailgating permits per gameday, and according to Wise, ASCSU would ideally like to see 45 of those spots filled, with an average of two spots per person or group.

Rhine believes that over time, as more students recognize what’s available to them during gameday, attendance rates will increase.

“(Tailgating is) a lot of fun,” Rhine said. “The campus is very vibrant on gamedays and the school has put a lot of work in overall. In particular, I think students are not necessarily realizing that they can still grill, they can bring coolers, and it’s a good time. The next game is in two weeks and I hope to see as many students there as I can.”

The Colorado State football team defeated the University of Nevada 44-42 Saturday. The Rams’ next home game is on Saturday Oct. 28 against Air Force.

Collegian reporter Matt Bailey can be reached at news@collegian.com or on Twitter @mattnes1999.