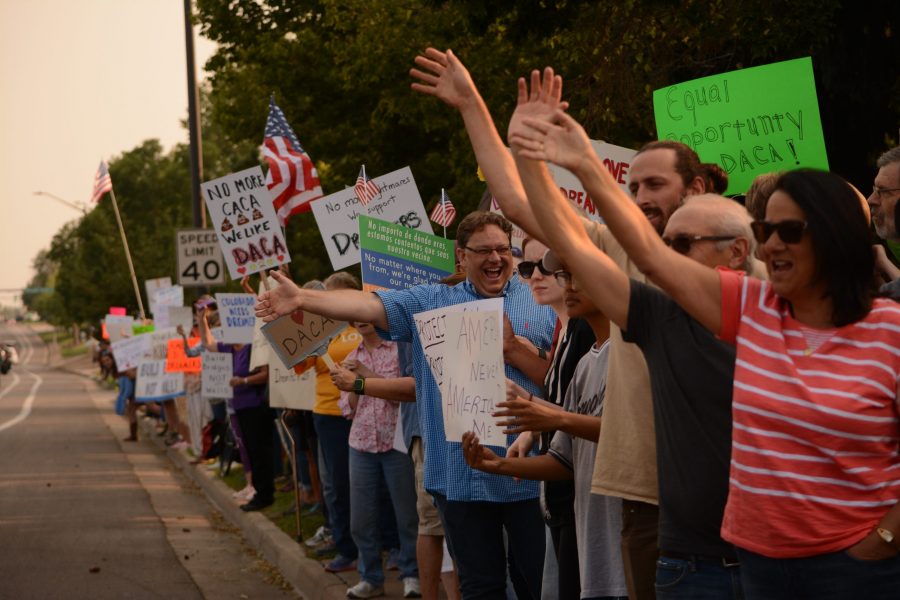 Fort Collins for Progress, Alianza NORCO and Indivisible NOCO hosted the DACA solidarity rally in front of Senator Gardner’s office on Tuesday in response to the programs cut by the Trump administration on Tuesday.

The DACA solidarity rally is the most recent rally to be held in Fort Collins over the last year, including police protests, immigration rallies and the Fort Collins’ sit-lie ban.

Around 200 people attended the demonstration, including Fort Collins residents aging from newborns to elderly citizens, students from the University of Northern Colorado and Colorado District 11 representative Jonathan Singer, to show their support for the DACA program.

“I think it’s important for all of us from all walks of life to support our kids,” Singer said. “They are Colorado’s kids.”

The recent change with DACA is said to affect thousands of individuals across the nation, according the Singer.

“When you have 17,000 members of our state that are feeling under attack and like they can be whisked away, if not tomorrow in six months, “ Singer said, “I think it’s important for everybody, not just average citizens to say, ‘We represent you, and we are going to do everything we can to protect you.”

DACA is an American immigration policy founded by the Obama administration that provides immigrant children and young people that provides protection from deportation through renewable two-year periods.

The policy was originally created to acknowledge that many immigrant students had been raised in the United States. Following Trump’s decision a few days ago, the DACA program is expected to end in six months.

According to an email from CSU President Tony Frank, about 189 students at CSU will be impacted by President Trump’s decision to end DACA.

According to Andrew Bondi, a Colorado State University graduate student and Fort Collins for Progress’s Organizing Director, this rally was organized in part to help bring attention to the DACA, as most Colorado residents are unware of the program and the events surrounding it.

Bondi said the demonstration intended to apply pressure on Sen. Cory Gardner to come out in support of either the DREAMERS or the BRIDGE Acts, which would provided support for those from DACA.

On Tuesday afternoon, Gardner tweeted that he would support the DREAM Act. alongside Senator Michael Bennet .

I’m proud to cosponsor the bipartisan #DreamAct with @SenBennetCO that provides certainty to law-abiding Dreamers. Congress must act now. pic.twitter.com/cb9cttH5oQ

Not everyone affected by the change in DACA is a minor, with some of those affected having gone through the program throughout their childhood and now in colleges or the work force.

“I don’t even want to call them kids because we got some people that have completely finished all of their college work and are working here in the United States,” Bondi said. “(We want to) help support them and get them integrated into our society as a whole. They’ve been here the entire time, (and) there’s no reason we should be sending them home.”

Bondi said that many people affected by the DACA decision have lived in the United States for years, with many growing up in the U.S., despite not being citizens.

“For the vast majority of them, home is here,” Bondi said. “They don’t know anywhere else, they haven’t grown up anywhere else. Their culture is here, they belong here.”

The decision for DACA has affected those beyond immigrants, and some international students attended the rally in support.

“It’s all that I believe in, DACA is human rights,” said Raghda Eldeeb, a CSU international student and Student Affairs and higher education major from Egypt. “I think people don’t see the gravity of DACA on an economic level. They think it’s just people staying here taking their jobs, taking their schools, taking their admissions, but it’s more than that.”

Eldeeb said that immigrants are a vital part to the community in both the national and local levels.

“They contribute to the economy, with their talents, with everything,” Eldeeb said. “Staying here is a benefit for the U.S. … it is everything I believe in.”

Eldeeb sported a sign that read, “Resist, this is your home,” from a song in her native language.

Eldeeb believes that because of her degrees in student affairs and education, representation of different groups is important, especially in situations like DACA.

“I hope to show solidarity to marginalized identities in the U.S., so we can be one community,” Eldeeb said. “We are all affected by the system, one way or another. It’s our social responsibility in this community to support each other.”

Collegian reporter Tony Villalobos May can be reached online at photo@collegian.com or on Twitter @TheTonyVM.