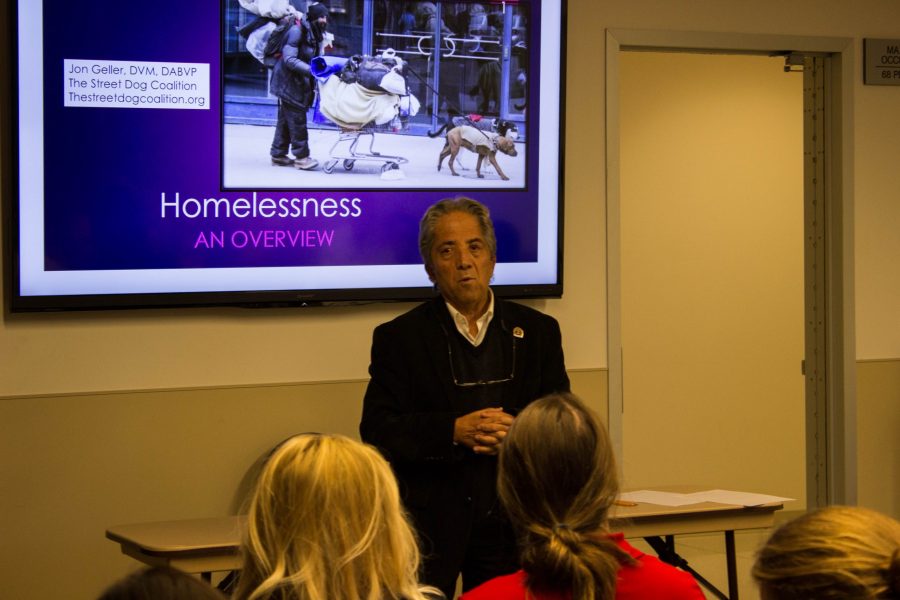 Senator John Kefalas speaks at the Rotaract Club Meeting in the LSC at 6 p.m on Monday night. "Housing is the solution, I can tell you that." Kefalas said about the solutions for homelessness in Fort Collins. (Jenna Van Lone | Collegian)

Colorado Senator John Kefalas returned to Fort Collins to urge members of the Rotaract Club of Colorado State University to engage with the local community regarding homelessness.

Sen. Kefalas spoke to members, also known as Rotaractors, about homelessness during the organization’s third meeting of the year Monday night. Around 28 people attended the presentation, most of them Rotaractors.

The Rotaract Club of CSU is one of many community service organizations affiliated with Rotary International, an international organization which focuses on humanitarian services.

Renée Hoffman, a CSU student and legislative intern for Kefalas, shared topics with Kefalas and spoke about the state’s approaches to homelessness through policies.

Hoffman spoke about Colorado House Bill 17-1314, proposed in April. The bill was postponed by the House in the same month. HB17-1314 would have protected all members of the public’s right to stand, sit, lie down and cover oneself in public spaces.

Hoffman and Kefalas said that while the bill would have protected homeless persons from obtaining criminal records, it would not actually solve the overall issue.

“In the Right to Rest Act, (funding for) services and service providers would not be included in that bill,” Hoffman said. “So, it is not a solution to homelessness.”

Hoffman also mentioned Homeward 2020, a catalyst for Fort Collins’s Ten-Year Plan to make homelessness “rare, short-lived and non-recurring.” Homeward 2020 is primarily concerned with data-gathering as part of the City’s Housing First Initiative which works with other homeless services and are thus not a service provider themselves.

“The City of Fort Collins should get a lot of credit because they’ve really tried to look at the complex issues of homelessness in as holistic of a way as possible,” Kefalas said. “Clearly persons who are homeless are vulnerable … but if you talk to these business people downtown, some of these conflict situations are tough. One of the more effective policy responses … is the Outreach program.”

Dr. Jon Geller, founder of the non-profit Street Dog Coalition, was also present. The Street Dog Coalition is an organization dedicated to providing free medical care and services for pets belonging to the homeless. Geller is a practicing veterinarian at the Fort Collins Veterinary Emergency and Rehabilitation Hospital.

Geller explained how he came with the idea of the Street Dog Coalition and the importance of pets for those experiencing homelessness.

“It was personal for me because I was kinda getting burned out in my work, which deals with large sums of money … the economic struggles that I see in the veterinary field made me realize that people with no money at all aren’t receiving veterinary services,” Geller said. “The importance of their pets became clear to me later when I realized that many of them had no friends whatsoever, so it (pets) gave them purpose to their lives.

Kefalas ultimately urged the Rotaractors to get involved in state and local government.

“My take-home message is if you don’t know who your state legislators are, or who your city council people are,” Kefalas said. “You really need to know who your folks are.”

“I think Senator Kefalas did a good job focusing on relationship-building first,” Orahovats said. “It makes sense that by providing housing for folks … they can have some sort of foundation.”

Collegian news reporter Gabriel Go can be reached at news@collegian.com or on Twitter @rgabrielgo.