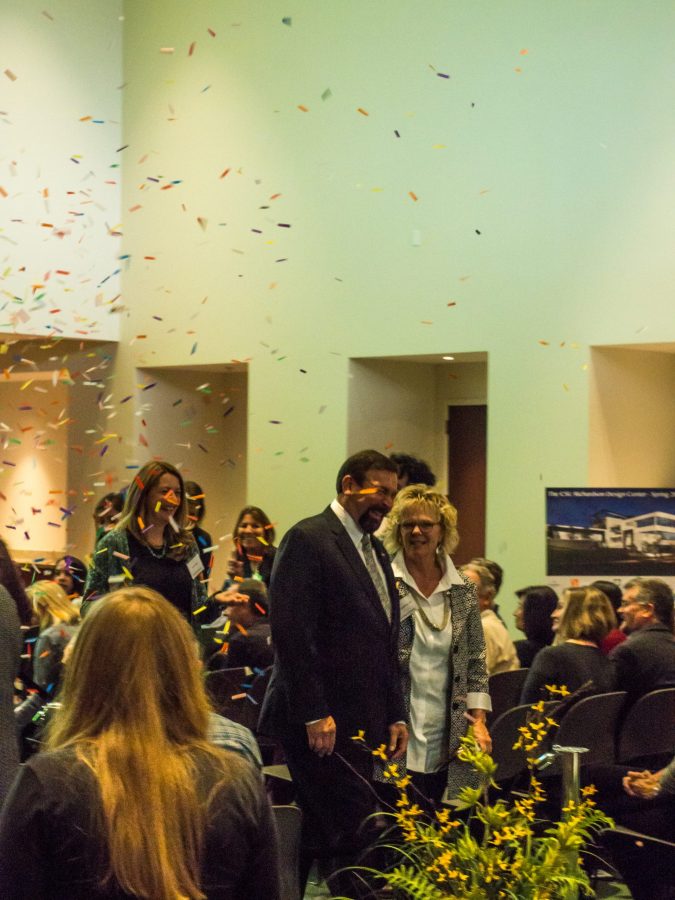 While it rained outside Wednesday afternoon, a different sort of rain fell in the Smith Alumni Center: confetti.

Though much of the groundbreaking ceremony moved inside due to the change in weather, spirits were high as the project’s leaders, University administration, alumni and students gathered together to symbolically begin construction on the Richardson Design Center.

The ceremony was originally scheduled to be in the parking lot on the west side of Gifford, off of Lake Street east of the new on-campus stadium.

“It seems to me one of the elements of inspiration is in the element of surprise,” said University President Tony Frank. “When we’re inspired by something, more often it’s because we see something that we didn’t see coming. It’s outside of the way we traditionally look at the world.”

Inspiration was a major theme of the ceremony, with Dean Jeff McCubbin of the College of Health and Human Sciences encouraging those in attendance to leave their own words of inspiration on a wall before leaving.

“We as a University recognize the need for inspirational spaces to attract and retain the best faculty and the best students,” Frank said.

The facility is scheduled to open in early 2019. At that time, the CSU design and merchandising department will move from Alsyeworth hall into the new center.

“We’re all really excited, especially since we just got the news that we’ll actually be moving into the center next school year,” said Jordan Miller, junior interior design major.

The project was announced in October 2016 when Nancy and Curt Richardson, co-founders of OtterBox and Blue Ocean Enterprises, pledged $8.1 million to the center.

The Richardson’s donation covers half of the total cost of $16.5 million, the rest of which the university is trying to fundraise by encouraging donors to name interior spaces. Those in attendance were offered pamphlets laying out the various naming opportunities and corresponding prices.

The 40,600-square-foot building is intended to provide creative space for students and faculty across disciplines, in addition to offering new growth for the College of Health and Human Science’s department of Design and Merchandising. With new design studios and labs, as well as presentation spaces, classrooms and computer labs, the center offers potential for new courses and the possibility of a minor in design, according to SOURCE.

Nancy Richardson, CSU alumna of the class of 1982, received her degree in design from CSU. Richardson spoke to those in attendance about her own inspiration for the center and her hopes for the future.

“The breaking of this ground symbolizes a milestone in the history of the CSU design discipline,” said Richardson.