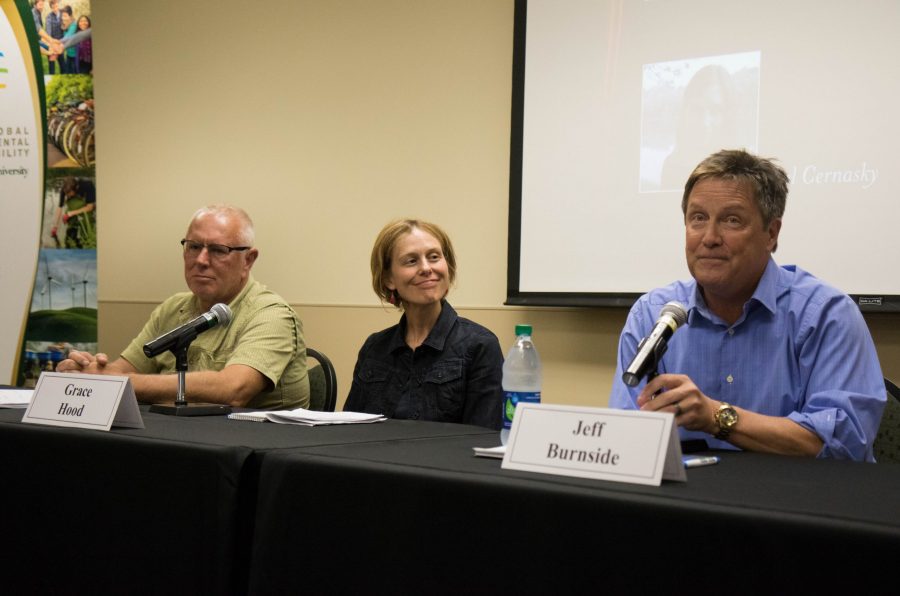 A panel of journalists gathered in the Lory Student Center to discuss science journalism at a panel put on by the School of Global Environmental Sustainability.

The panel, titled “Communicating Science in a ‘Post-Truth World,” took place on Sept. 12. Four journalists joined a room full of academics, researchers, students and interested members of the community.

Nancy Baron, the panel’s moderator began the discussion by asking, “How many of you really care about making this a better world?”

Everyone in the room stood up.

“This is something that scientists and journalists share: a passionate desire to make this world a better place,” Baron said after the attendees and the panelists sat back down.

According to Barren “post-truth” was Oxford Dictionary’s word of the year in 2016.

“The term has come to mean, ‘where objective facts and evidence can be lost in the noise generated by direct appeals to emotion and deeply held personal beliefs,’” Baron said.

According to Joyce, “post-truth” is not new.

“I’ve been covering science since the ’70s,” Joyce said. “I started in Washington, and I saw people on the left as much on the right ‘cherry-picking’ science. Everybody has an agenda.”

According to Hood, who has over 10 years of experience in journalism, her job became more difficult with the change in presidency.

“I would say (that) with the Trump Administration, one of the biggest challenges has been localizing stories,” Hood said. “I really found myself not trying to go for volume anymore but more (of) the contextual stories.

According to Cernansky she had to find a way to put things into today’s context. Cernansky said you have to find a common ground with people.

For instance, Cernansky brought up climate change scientist, Katherine Hayhoe, who according to Cernansky, communicated with evangelical Christians in Texas about the issue of climate change.

“She would communicate with the evangelicals and release climate information,” Cernansky said. “People believe her and are converted.”

Burnside told a story about a recent news room experience he had in a Portland, Oregon news room during a morning story meeting.

According to Burnside, the room followed the live traffic on their website. They had every story in a list and the number of people reading a given story at that moment in time.

“You can see that these stories (are) trading places on this ranking,” Burnside said. “And, it literally affected the dialogue that was going on on the assignment that day. I just found that fascinating. Talk about reactive.”

According to Joyce,  science journalism depends on getting people who do not know much about science interested.

“What you have to do is get people who don’t know anything about science to care enough to read and listen the first 15, 30 seconds,” Joyce said. “How do you do that? You go to an interesting place. You don’t hit them over the head with jargon.”

According to Burnside, journalists walk a fine line and it is not their job to target certain audiences and convince them of something.

“The best thing we can do is present the facts and hope for the best,” Burnside said. “You can’t lose your humanity, but you also have to maintain objectivity.”

According to Burnside, journalism is evolving and leaning towards the digital.

“Imagery is becoming so much more important to the public than words,” Burnside said. “The most explosive new form of communicating is a sixty second video with words on the screen.”

Collegian news reporter Abby Currie can be reached at news@collegian.com or on Twitter @abcchic15.