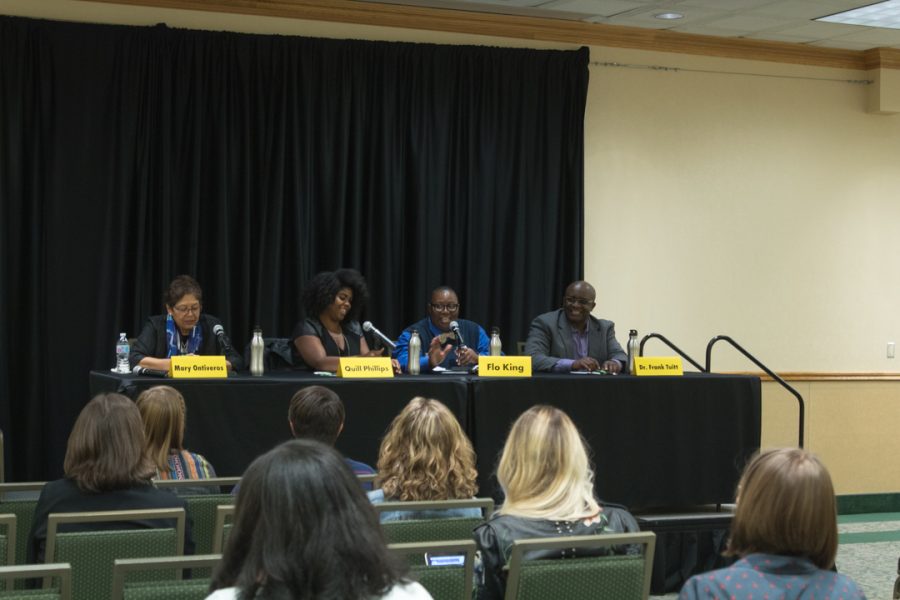 A panel of four diversity officers, Mary Ontiveros, Qull Philips, Flo King and Dr. Frank Tuitt, discuss a variety of topics spanning the classification of student admissions to their own personal journey of how they got to where they are today, Lory Student Center (LSC). Flo King along with the other panelists gave a fact about themselves to start off the panel before more serious topics were introduced. King later brought up how the progression of institutions is progressing in terms of diversity inclusiveness and how not only should students be the focus of diversity and inclusiveness, but also how faculty and staff should respond to students. l Tyler Morales | Collegian

When thinking back to where universities started and how they are today, diversity work plays a key role in everything that makes an institution what it is, according to panelists at Wednesday afternoon’s Diversity Symposium.

The goal of this panel discussion was to arouse awareness within the community about the efforts and work on the part of diversity and inclusion departments across different Colorado school. The efforts are far-reaching and strive to improve the inclusivity within the college communities they are a part of, supporting faculty and student efforts alike.

Some of the topics discussed were immigration; when should an institution speak up on political issues and which political issues; free speech and the responsibilities as well as consequences of free speech; inclusion around religion; and lack of diversity around faculty and staff.

“A lot of schools have done a great job increasing their student population but they have not matched the faculty and staff ratio,” King said.

Each panelist discussed the entry point to their careers within diversity and inclusion work and elaborated on their successes and struggles.

During the discussion Ontiveros told a story about when she realized that this was the direction she was called to pursue. It was not until she became assistant director of admissions that this calling was made clear.

“We don’t even realize (there) are racist policies or procedures perhaps,” Ontiveros said. “(Thinking back to years ago,) one (of these policies) was the computer system we have, when coding a student, they could either be listed as a student of color or someone eligible for the honors program. But you couldn’t be both. It is systems, our systems, that can really impact what these looks like to the individual as well as the University overall.”

Collegian news reporter Clair Tillotson can be reached at news@collegian.com or on Twitter @clairmonet.