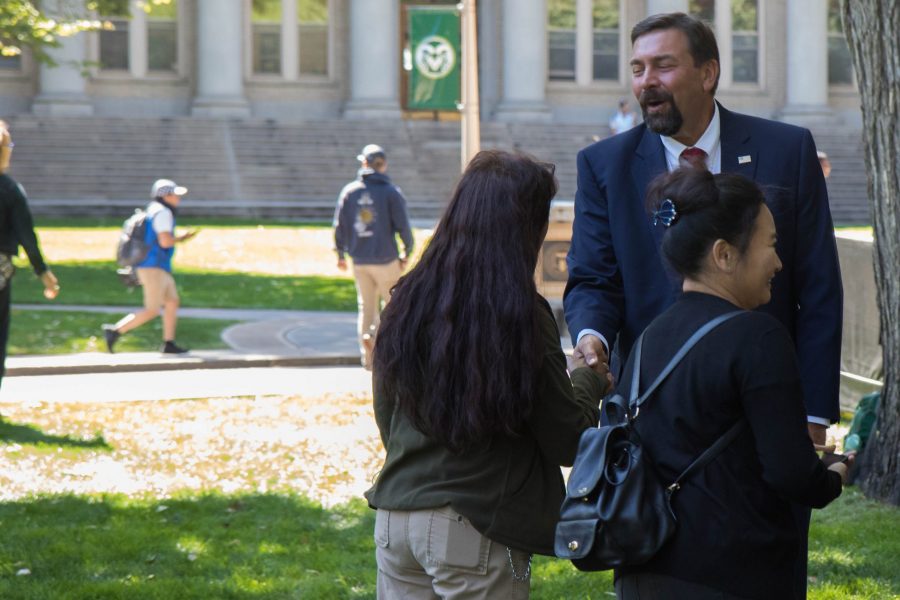 While Colorado State University President Dr. Tony Frank spoke about CSU accomplishments, record enrollment numbers, and future improvements during his annual Fall Address Wednesday afternoon, the audience may not have realized he was simultaneously awarded a distinguishing new title.

A committee of community leaders from The National Western Stock Show, a 112-year-old organization that provides scholarships in agriculture and medicine, selected Frank as the 2018 Citizen of the West.

“Tony has served Colorado State University and the CSU system with impressive leadership for many years,” said Pat Grant, chairman of the board of the Western Stock Show Association. “He is an extraordinary visionary who is committed to a broader engagement of CSU regionally, nationally, and internationally, through an expanding role at the future National Western Center.”

According to committee members, Frank was chosen for his embodiment and spirit of the Western pioneer, perpetuating the West’s cultural heritage and ideas.

Frank was also recognized for his dedication to the local community, serving on the boards of the National Western Stock Show Association, the Boettcher Foundation, the Denver Metro Chamber of Commerce and the Food Bank for Larimer County. He has also been inducted into his native Illinois and Colorado 4-H Halls of Fame.

Frank will receive his award as 2018 Citizen of the West on Jan. 8, 2018 at the National Western Events Center in Denver, CO.