Banners displayed near campus on move-in day cause concern 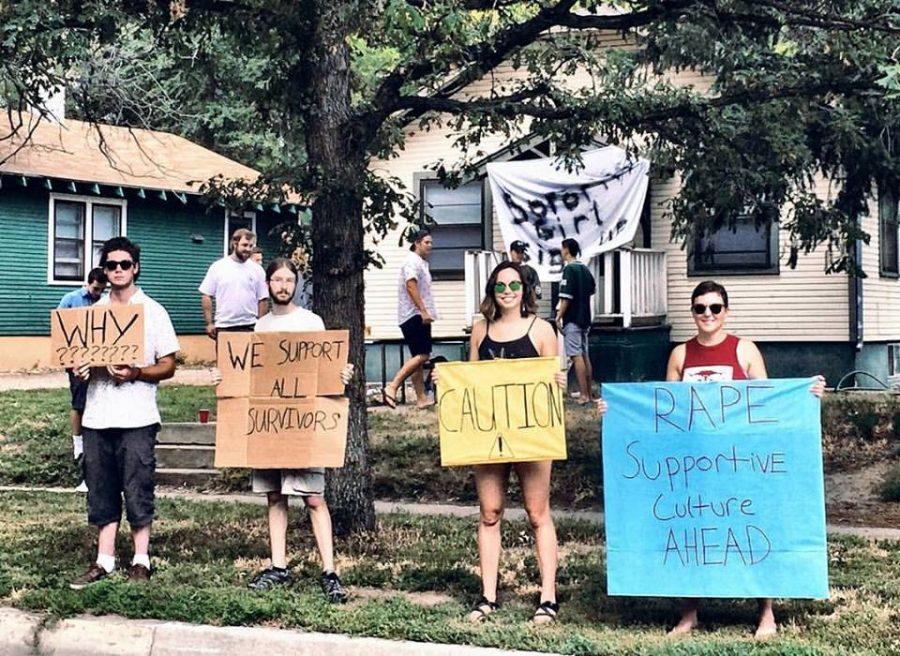 Banners reading “Daughter Day Care,” “Thank You 4 Your Sons & Daddies,” and “Moms Drink For Free” hung in front of houses located along Laurel Avenue and Shields Street during freshman move in day on Aug. 16.

Dean of Students Jody Donovan requested that the banners, which were hung by Colorado State University students, be taken down since the banners were deemed offensive and sexist in nature.

According to students who live in one house along Shields,  a CSU official from Westfall Hall requested that the students take the banners down an hour or two after they hung the banners.

The students in the house, who asked to remain anonymous, refused to remove the banners. A Fort Collins police officer arrived next in response to a local complaint, and the students took down the banner. Donovan arrived after the police officer left, but a sign that read, “You Honk, We Drink” still remained in the house’s front yard.

The CSU administration has taken proactive approaches over the recent years in response to what it views as problematic signs that are displayed on move-in day.

Donovan heads what she calls the “Dean’s Team,” comprised of herself, Associate Dean of Students Dr. Craig Chesson and Assistant Dean of Students John Henderson to respond to the problematic signs as well as to prevent their display. This year, they spoke with nearly 60 owners on Laurel and Shields.

While the signs certainly are within the boundaries of free speech and are on private property, for parents and family members moving their students into an unfamiliar community, these signs signal that Fort Collins is not a safe or welcoming community.” Jody Donovan, Dean of Students

“While the signs certainly are within the boundaries of free speech and are on private property, for parents and family members moving their students into an unfamiliar community, these signs signal that Fort Collins is not a safe or welcoming community,” Donovan wrote in the letter. “These signs can give the wrong impression and may indicate that some (sic) that sexual assault and harassment are accepted behaviors in our community, on and off campus.”

Juan Caro, the chairman of the CSU Conservative Interest Group, has advocated for the students involved in the incident. Earlier this year, Caro lobbied for Senate Bill 62 to eliminate free speech zones on Colorado college campuses and allow students to express their ideas in all public areas of their campus. Gov. Hickenlooper signed the bill, which went into effect Aug. 9.

“(Dean Donovan) should not be going out of her way onto private property to influence the decisions of private citizens,” Caro said. “You have students who want to express something, and you have the University going out of their way, by any means possible, to silence them. They will do whatever it takes to silence students to stop them from expressing their views.”

You have students who want to express something, and you have the University going out of their way, by any means possible, to silence them.”Juan Caro, the chairman of the CSU Conservative Interest Group

Caro said that the school is reaching outside of its jurisdiction and that this incident is indicative of a larger, national debate of free speech, both on and off college campuses.

“What they were saying is not important at all,” Caro said of the banners. “But, they have a right to say it, and that is important.”

Donovan said that the University was exercising its free speech to talk with the individuals of the properties who put up the signs.

“We didn’t force them to take them down,” Donovan said. “We asked if they would take them down, but we didn’t require them to. We want to make sure we are a welcoming and supporting community, and those signs send a different message.”

Similar signs at other institutions have been the source of national controversy in the last few years. In 2015, Old Dominion University’s Sigma Nu fraternity was suspended by its national office after three sexually suggestive banners were hung from the group’s off-campus house during the weekend freshmen moved onto campus. ODU and the fraternity became embroiled in a debate about whether the signs were protected free speech or whether they encouraged a culture of sexual assault.

Monica Rivera, the director of the WGAC at CSU, said that the signs encourage rape supportive culture. Fifty-eight percent of incoming CSU students reported some experience with sexual violence before stepping foot on campus, according to 3,819 student responses in a survey the WGAC conducted during the 2017 Ram Orientation. Banners such as the ones displayed, Rivera said, terrify new students who may feel on the receiving end of predatory behavior.

“That is their very first day moving onto campus,” Rivera said. “I’m terrified of bees, and if someone had a giant banner that said, ‘We’re going to release a giant beehive on you,’ it would hit me (with) the physiological impact of that stress and trauma.”

According to Rivera, the banners make a large impact due to the percentage of sexual assaults.

“You have a group of students who have a heightened fear of sexual violence and the environment in which that sexual violence is likely to happen, in that narrow window of time, is being broadcast on banners directly across the street from where they’re living,” Rivera said. “It’s not just rape supportive culture versus free speech. I think that there’s a specific recipe of context that we need to think about.”