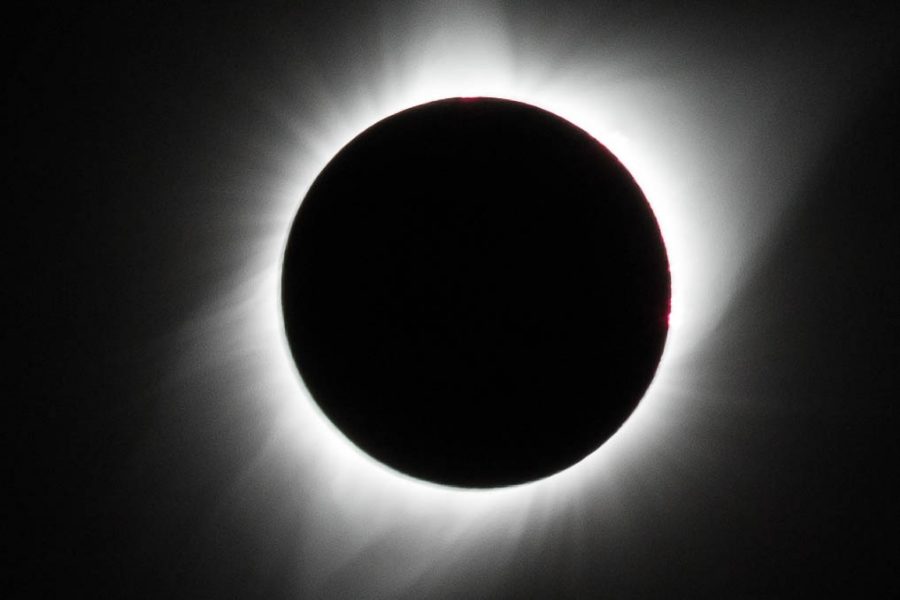 The total solar eclipse, as seen from Casper, Wyoming at approximately 11:43 am on Monday, August 21st, 2017 (Julia Trowbridge | Collegian)

Hundreds of thousands of people flooded across Wyoming on Monday, taking over Walmart parking lots, campgrounds, and highways to catch a glimpse of a two-minute and 26-second celestial event.

Viewers traveled from all over the world to the totality region for the Great American Eclipse, which included a swath of Wyoming. The traffic doubled the population of the state, according to the Colorado Department of Transportation. According to experts cited by CDOT, 600,000 people were expected to travel to the area.

Casper, Wyo. was a popular destination for viewing the total solar eclipse due to its high predictions of clear skies and its location in the totality zone. The eclipse lasted for two minutes and 26 seconds, starting at precisely 11:42:39 a.m.

While thousands of Colorado State University students and Fort Collins community members attended the solar eclipse viewing at CSU, some students traveled to the totality region. Jed Aist, a sophomore at CSU studying Biochemistry, traveled to Glenrock, Wyo. to view the total solar eclipse, and thoroughly enjoyed his experience.

Although the experience was exciting, traffic traveling to the totality region was immense. Some heading up from Denver were not able to make it to the eclipse, and others dealt with a bunch of returning traffic.

“When we left, we immediately got in line and were at a standstill for two hours,” Aist said.

To maximize safety for this event, departments like the Colorado Department of Transportation and Fort Collins Police Services kept travelers updated on traffic conditions.

Overall, the experience was one not to be missed. The next eclipse visible to North America follows the east and south regions of the United States.

Megan Kocina, a junior at CSU studying Human Dimensions and Natural Resources, encourages others to view the solar eclipse at this next chance.

“There’s no other feeling I’ve ever experienced like that,” Kocina said. “The simpleness and complexity of that moment makes you feel really big and really small at the same time. With a 99 percent totality, you don’t get the same experience.”

Reporter Julia Trowbridge can be reached at news@collegian.com or on twitter @chapin_jules.