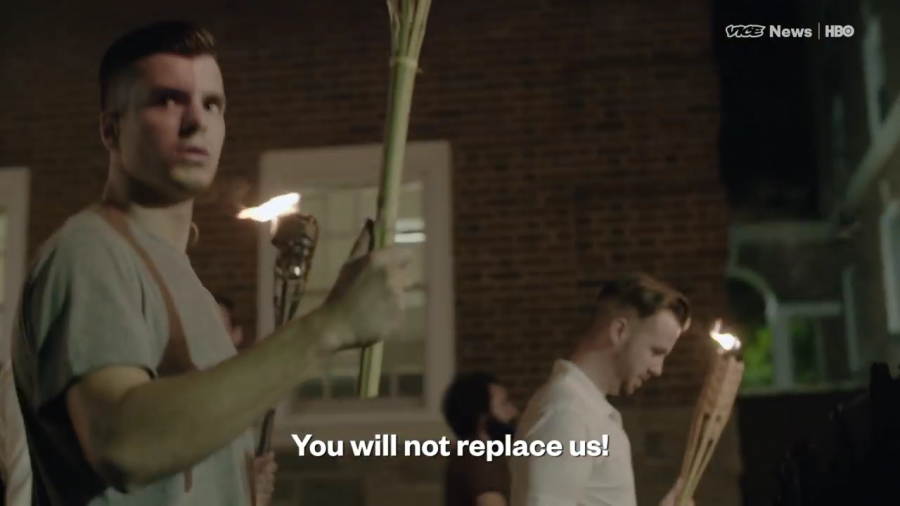 Clark Canepa, a former CSU student, participated in the Charlottesville rally as a member of the alt-right. (Screenshot courtesy of Vice News/HBO)

A former Colorado State University student participated in the Charlottesville rally Aug. 11 – which escalated into a riot leaving 19 injured and one person dead – as a member of the alt-right.

Clark Canepa attended CSU as a freshman. Following his first year, Canepa transferred to Missouri, where he grew up.

Canepa participated in the rally as a member of Identity Evropa, a group with a heavy presence at the “Unite the Right” rally– a protest by members of the alt-right against the removal of the Robert E. Lee statue in Lee Park and the park’s renaming to Emancipation Park. The group is self-described as “Europeans who have discovered that we are part of the great peoples, history and civilization that flowed from the European continent,” according to its website.

This was a rejection to the cultural destruction taking place of our history and identity. It’s something white people are told not to have any longer, effectively saying, ‘Prepare for your extinction while we flood you with immigrants.’”

-Clark Canepa, on his reason for attending the rally

“This was a rejection to the cultural destruction taking place of our history and identity,” Canepa said. “It’s something white people are told not to have any longer, effectively saying, ‘Prepare for your extinction while we flood you with immigrants.’”

The rally became much more than a rejection. Neo-Nazis and members of the Ku Klux Klan joined in, and counter-protesters came to stand against it. Violence peaked on Aug. 12 when a member of the alt-right movement drove his car through the crowd, killing one person and injuring 19.

“Unfortunately, the left wing violence wasn’t prevented by the police. They used this as (an) excuse to shut down our rally, turning (it) into a chaotic event,” Canepa said to a St.Louis television station.

This campus welcomes you, and we welcome your race, your culture, your religion, your gender, your heritage, your history, your ideology,”

“This campus welcomes you, and we welcome your race, your culture, your religion, your gender, your heritage, your history, your ideology,” Frank wrote. “We reject those hate-fueled ‘isms’ that bring nothing but sorrow and destruction and terror – bad ideas that have been tested by history and science and conscience and proved wrong over and over again. We stand together, in peace and non-violence, but with courage and forthrightness, against those who would use the public forum to incite violence and deprive the Constitutional rights of others.”

Amidst national coverage of racial tension, Colorado State University experienced a bias-motivated incident of its own when a fake noose was found in Newsom Hall. The University has since responded with outreach by Residence Life staff to residents on campus.

Canepa said he believes white people will become the minority in America, which he thinks is a problem, and that the counter-protest was a result of the radicalization of the left due to mainstream media and the previous administration.

“This is something we see already manifesting, where whites in America are deprived from their culture and identity,” Canepa said. “… They are trying to knock down our statues. This is us reacting in defense of our culture, history and identity.”

Some of Canepa’s immediate family have now condemned his actions and rhetoric following the release of a video of the rally by VICE in which Canepa appears holding a tiki torch shouting, “You will not replace us!”

According to Daily Mail, Canepa’s sister, who remained unidentified, took to social media to share her perspective of her brother’s involvement with the rally.

“All I can do is apologize for my brother’s actions,” she said. “I do not condone them under any circumstances.”

According to Riverfront Times, Canepa’s aunt, Carol Size, is well known within St.Louis as an alt-right commenter on posts made by St.Louis Post-Dispatch.

Let me be very clear, I unequivocally condemn the Charlottesville white supremacist, KKK, neo-Nazi hate marches in which (Clark) participated. With my whole heart I oppose all racists, bigots and anti-Semitic groups.”

“Let me be very clear,” Carol said on her Twitter account that has since been deleted, “I unequivocally condemn the Charlottesville white supremacist, KKK, neo-Nazi hate marches in which (Clark) participated. With my whole heart I oppose all racists, bigots and anti-Semitic groups. My nephew Clark is a deeply-troubled young man whose views I sincerely hope can be transformed to oppose this hateful bigotry.”

In the email addressing campus, President Frank condemned the event. He wrote that the events were reminiscent of America’s history in which symbols and flags, much like the ones used at the rally, were used to disenfranchise millions of human beings. He stressed the importance and necessity of free speech, but views it as a powerful tool for inclusivity rather than polarization.

“CSU cannot promise to shield anyone from words or ideas that may be damaging and destructive,” Frank said. “But we, as individuals, can speak out against those words and ideas and reveal them for what they are. We, as individuals, can stand with the marginalized in our community and offer support and strength. And CSU, as an institution, can and will do the same. Let’s stand proudly together as a community of scholars committed to truth, to justice, to access and inclusion, and to the value and dignity of all people.”