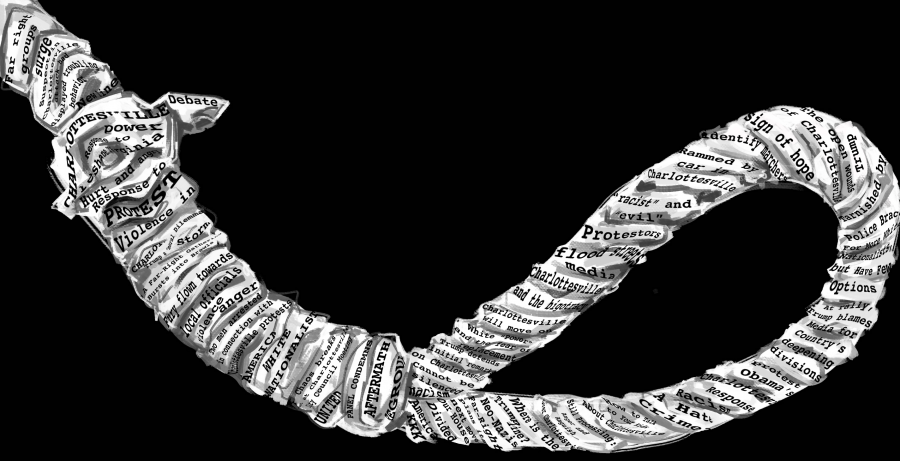 Elijah Thomas woke up from a nap in his room in Newsom Hall on Aug. 19 to a knock by two of his coworkers: “Elijah, we think you need to see this.”

The only Black or African-American resident on his floor, and the resident assistant, Thomas walked a few steps to the end of his hall where he found a noose constructed of crepe paper dangling from the stairs in front the floors’ entrance.

Two days before classes started, Thomas was the target of what can be considered a bias-motivated incident– an incident against a person that is motivated in whole or in part by the offender’s bias against perceived or actual race, according to Residence Hall policies and procedures. In the moments that followed, Thomas took a video of the noose and posted it on Facebook. In the days that followed, Colorado State University responded with emails, meetings and statements.

Bias incidents are prohibited in the residence halls. The incident also caused a legal investigation – bias motivated crimes are prosecutable if committed with intention to intimidate. In this case, the noose could be considered intimidating because it is a historic symbol of violence against people of color.

In the video and post, Thomas called the incident proof of white supremacists at CSU, and asked University President Tony Frank to “truly address” racism on campus. Since posting, the video has been shared 130 times and viewed over 6,000 times.

“The first thought was definitely, ‘Why did this happen?'” Thomas said. “… Of course there’s a bit of anger, but if anything it motivated me. I felt very motivated to take this on and see it through to the end.”

The University moved swiftly on the incident: Thomas’ two coworkers submitted an incident report, the police were notified, and an investigation was initiated that day. That night, Thomas spoke with police, and Newsom’s Residence Director Andre Roberts, and other residence life directors were in the building to provide support for residents. On Sunday, Aug. 20, University President Tony Frank and Vice President of Student Affairs Blanche Hughes led an all-hall meeting to denounce the act.

But, Thomas doubts that the incident – which he believed targeted him – would have elicited the same response without his Facebook post. He said his boss, Newsom’s residence director, contacted him that day and said there would have to be a response since his video was getting so many views.

“For there to only be that meeting in Newsom Sunday night instead of addressing the campus as whole – that had me upset,” Thomas said. “It felt to me as though they were trying to make sure as few people knew about it as possible.”

Residence Life sent an email to all on-campus residents Thursday, informing staff and students of the steps taken to address the incident and provided a list of resources for those who may be impacted. The department is reportedly working on printed communication for all residence halls emphasizing the University’s newly adopted principles of community. Thomas does not think it is enough – he said the University and students should address the problem campus wide.

“It was hard for a lot of residents to remain optimistic because this happened before classes even started. For a lot of people, this was their first experience at CSU,” Thomas said. “… This affects a pretty large number of people on this campus. You have to make that known.”

This affects a pretty large number of people on this campus. You have to make that known. -Elijah Thomas, third year sociology student.

The paper noose came exactly a week after a rally organized by white nationalists and the “alt-right” turned violent and deadly in Charlottesville, Va., leaving one person dead and 19 others injured.

President Frank addressed the event in his annual welcome back campus-wide email Aug. 17– two days before the noose was found. He called the white supremacist rally a national disgrace and a stain upon humanity. But, some students criticized him for not mentioning the topic at freshmen commencement during his annual address to incoming students. Newsom Hall, where the noose was found, is primarily a first-year community.

“There’s a lot of different factors that go on (at convocation),” Frank said, explaining why he didn’t address Charlottesville during orientation. “Parents are there and whatnot, and I think we were pretty clear in our message. I don’t think we were very ambiguous about how we felt about white supremacists.”

Frank called the noose “deeply troubling,” and said that while CSU is an open marketplace of ideas and he is an advocate for free speech, the University will stand together against ideas like this.

“This is someone who didn’t own the ideology, and in my opinion, in a very cowardly way, hung up a symbol of racial violence,” Frank said. “The only purpose one could have is to intimidate others, to frighten them, and to divide us from standing together … That won’t work at Colorado State.”

“The only purpose one could have is to intimidate others, to frighten them, and to divide us from standing together. … That won’t work at Colorado State.”-Tony Frank, University president

Based on reports from his fellow RAs, Thomas estimates the noose was up for two and a half hours.

“I feel it was so heavily calculated,” Thomas said. “Someone had to take that particular piece of paper mâché from the lounge, and they had to think about it, as in, ‘I want this to resemble a noose, and we’re going to hang it in front of the hall in which there is a Black RA.'”

The timing of the incident in correlation with Charlottesville stood out to Thomas. And, though this was the most direct act of racism he has seen against him, he said he was not shocked by it.

“Racism has been around forever, essentially, so when it happened here, my thought was, ‘Okay, it’s just happening to me now,’” Thomas said. “That told me, and it should tell everyone on this campus, that we’re not immune from it.”

Thomas wants to work on addressing racial tensions on campus through programming and his role as an RA, and also through advocating for more diversity education during freshmen orientation. He plans to continue in his RA position in Newsom Hall.

“Regardless of what happens with this case, I’m still an RA, and I still have a job to do,” Thomas said. “I don’t dislike the establishment here. But, I am more so just challenging them to do more. …We preach that we are this inclusive diverse community, let’s prove it.”

CSU police conducted a preliminary investigation of the incident, but have since suspended further efforts. CSUPD did not find evidence to identify a suspect or to provide leads that supported continued investigation. Anyone with information should call CSUPD at 970-491-6425.