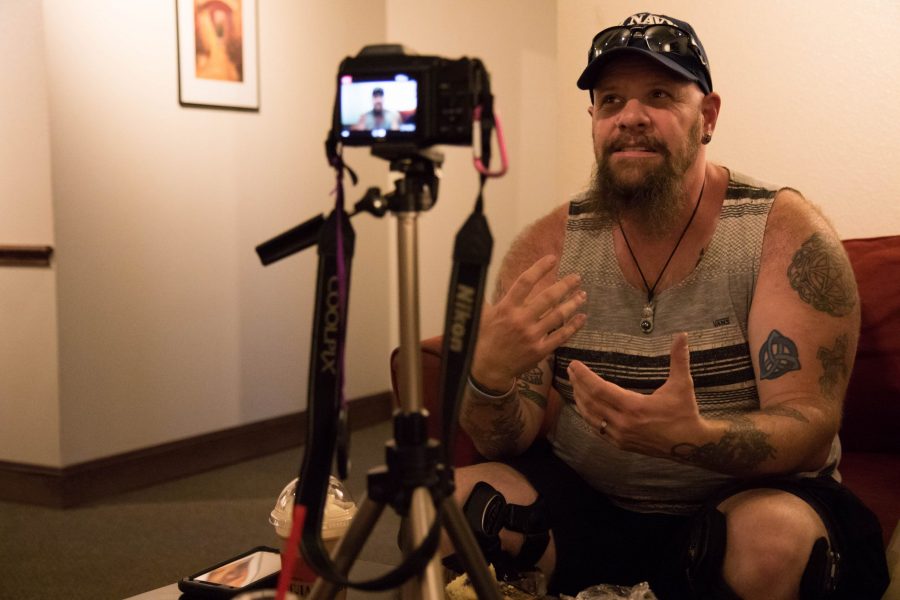 A transgender military veteran shared his story of service on July 30, in response to President Donald Trump’s tweets prohibiting transgender individuals from enlisting or serving in the miltary.

Kim Chambers, the director of NoCo Safespace, hosted the event after President Donald Trump tweeted on July 26 that transgender members would no longer be able to enlist or serve in the military.

Kaelen McCarthy served in the Navy from 1990 to 1994 as a welder stationed on a ship in Hawaii. McCarthy transitioned in 2002.

McCarthy suffers from post-traumatic stress disorder, stemming from two separate sexual assault incidents perpetrated by other active duty service members. He was also harassed for his appearance and perceived sexuality while in active duty.

Although the Veterans Affairs hospital has paid for his testosterone medication following his service in the Navy, McCarthy often has to educate the VA doctors on how to care for him. Some doctors have refused to treat him because he is transgender.

“We’re not getting the help that we need, or, in some aspects, the respect,” McCarthy said.

McCarthy believes that there needs to be more training and visibility regarding transgender service members.

A 2016 RAND Corporation study estimated between 1,320 and 6,630 transgender service members are in the active duty military, which is less than 0.5 percent of active personnel.

Ginal cited a figure from a Defense-Department commissioned study published last year by the Research and Development (RAND) Corporation that indicated gender-transition-related medical treatment would cost the military between $2.4 million and $8.4 million annually, only a .13 percent increase in health care spending. She also dismisses the notion that transgender individuals are taking advantage of the military.

“No one’s going into the military to become transgender,” Ginal said.

McCarthy said that despite the current societal stigma, it’s easier to come out as transgender now than it was before. He sympathizes with the difficulties faced by current transgender military members and rejects the backlash against people like him.

“It’s not a big deal at all,” McCarthy said, about being transgender. “If people would just be like, ‘you’re human,’ instead of putting a label on it, (then) you’re human. It doesn’t matter.”

McCarthy said that he has some friends who are still against his lifestyle. Some of his conservative high school friends believe his being transgender is a choice. McCarthy counters this belief.

“According to them, God doesn’t make mistakes,” McCarthy said. “But, he does put people on different paths.”

McCarthy had a message of positivity for everyone, transgender or not.

“If we’re not our authentic selves, then people can’t take us at face value,” McCarthy said. “Live as authentically as you can, and it will create a better space for all of us.”

Collegian news reporter Colin Raunig can be reached at news@collegian.com or on Twitter