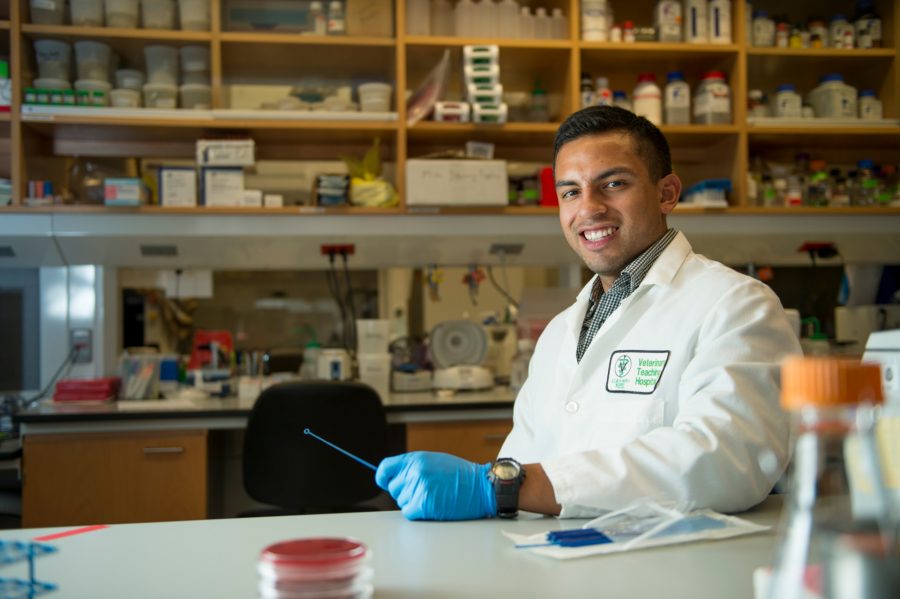 Enrique Doster answered a long-awaited phone call from his mentor, Dr. Paul Morley, only to be greeted with anger.

“Emotions were mixed when I got the news,” Doster said. “Morley decided to show his prankster side by calling me in an angry tone to discuss details about my progress, only to burst out laughing.”

Doster learned from his mentor that he had been awarded the Louis Stokes Alliance for Minority Participation Bridge to the Doctorate fellowship from the National Science Foundation.

“The rocky declaration of my fellowship just made the realization that I was officially a Bridge to the Doctorate fellow that much more amazing,” Doster said.

Doster is in his fourth year of the D.V.M./Ph.D. dual degree program within the College of Veterinary Medicine and Biomedical Sciences at Colorado State University. He is one of 15 students enrolled in the program. According to the program’s website, the combined degree program, which takes seven to eight years to complete, allows students to earn a Doctor of Veterinary Medicine and a Doctor of Philosophy to create future veterinarians experienced in both application and research.

Doster’s passion for animals emanates from his childhood experiences of accompanying his step-father, a large-animal veterinarian, to work on both sides of the Texas-Mexico border. Doster and his step-father would start the day by administering vaccines to goats and pigs and end the day by delivering calves at night.

At a young age, Doster began to notice the differences in animal welfare on either side of the border. These observations sparked Doster’s passion for animal welfare that later lead to a future career in veterinary medicine.

“My passion for animal welfare has since expanded to consider the wide spectrum of factors which influence livestock production,” Doster said. “From the underlying social, political and economic components to the ground-level management decisions affecting production measures, disease patterns, farm business longevity and the impact of farming on the surrounding environment.”

According to the fellowship’s website, the LSAMP program provides funding to colleges and universities to support the “graduation of well-prepared, highly-qualified students from underrepresented groups who pursue graduate studies or careers in STEM”.

According to Doster, the fellowship provides a living stipend and tuition benefits for a portion of his program, which will allow him to continue his research and studies without worrying about paying for the program, rent or living expenses. Doster will also be connected with other scientists from underrepresented ethnicities.

Doster’s current studies focus mainly on studying microbial communities and how they interact with humans, animals and the environment. Additionally, Doster studies antimicrobial resistance and its relationship with antibiotics.

“My future goal is to work with a national or international agency and foster collaborative research between interdisciplinary groups of scientists and livestock producers to develop sustainable food production practices and improve food security,” Doster said. “As a veterinary epidemiologist, I want to help facilitate the translation of the latest advances in research to everyday management practices that achieve holistic improvements in animal welfare, production measures, and food safety.”

Doster speaks highly of his experiences in the DVM/Ph.D program at CSU, saying that the unique program has prepared him for his future goals.

“I’m lucky that the skills I am gaining at CSU will allow me to fit along the wide spectrum of people working toward a similar goal, and I’m open minded about what my specific role will be in the future,” Doster said.