The Rocky Mountain Collegian • May 6, 2017 • https://collegian.com/articles/news/2017/05/thousands-gather-at-csu-rec-center-for-undie-run/ 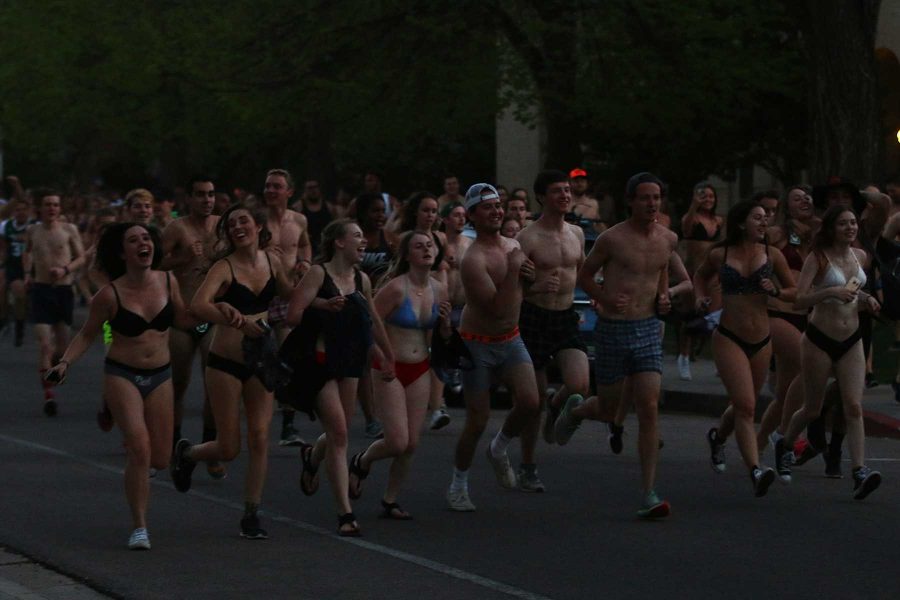 Thousands of students gathered outside the Student Recreation Center on Friday evening to relieve some stress before the start of finals week by running around campus in their undergarments.

Students jogged from the Colorado State University Rec Center through the Plaza and the Oval before ending back at the Rec Center, then they climbed on top of the volleyball net poles. Some female students climbed the poles and pulled their bras up at the crowd and faced no consequences due to a judge’s order that allows women to go topless in Fort Collins.

In previous years, the Undie Run was a charity event in which students would discard their clothes while running, and the clothes would be donated. However, the leftover clothing in recent years has caused around $15,000 in damage and cleanup costs and been taken to a landfill instead of donated.

In 2015 and 2016, the run was known as the Body Acceptance Run Extravagana, or B.A.R.E., to make the event safer for participants who experienced sexual assault by encouraging students to not touch anyone without consent. In 2016, the University encouraged students not to participate in the event, but students still showed up to the B.A.R.E. Run.

Though this year’s Undie Run was not officially organized by a student group, a Facebook page to promote the event was set up by a CSU student in hopes that someone would keep the tradition alive and encourage students to act responsibly.

“I don’t want people to destroy signs and cause a ruckus from previous years,” the student wrote in a statement to the Collegian. “I feel that it’s a time for students to come together and release some stress during dead week and have some fun. I made the event for them (B.A.R.E.) to realize how many people still want to do it.”

Another Facebook page encouraged students who planned to participate in the event to come to the Student Recreation Center in their underwear, avoid touching anyone else or causing damage to property, and to run along a designated path.

Zachary Klos, a sophomore biology major, said he did not know about the event last year, which prevented him from participating in the run.

“I lived in Westfall, and then the run went by, and I thought, ‘What’s going on down there?'” Klos said. “I eventually found out.”

Klos said his friend convinced him to participate in the run this year, but he also felt it was important to his experience at Colorado State University.

“It just seems like something you should do before you graduate,” Klos said. “It’s kind of a campus wide event.”

Klos said he decided to particpate this year despite having some reservations about the run.

Like Klos, sophomore statistics major Alex Hopkins discovered the run as it was happening last year.

“I accidentally watched it last year,” Hopkins said. “I was on my way to the Rec, and I forgot about it.”

Hopkins attended this year’s Undie Run because she felt it was entertaining to watch.

“One reason (I didn’t participate) is because I don’t like to run,” Hopkins said. “I want to join in the fun (but) with having clothes on. I feel like (watching) it might be a way to build up courage to see what it’s really like.”