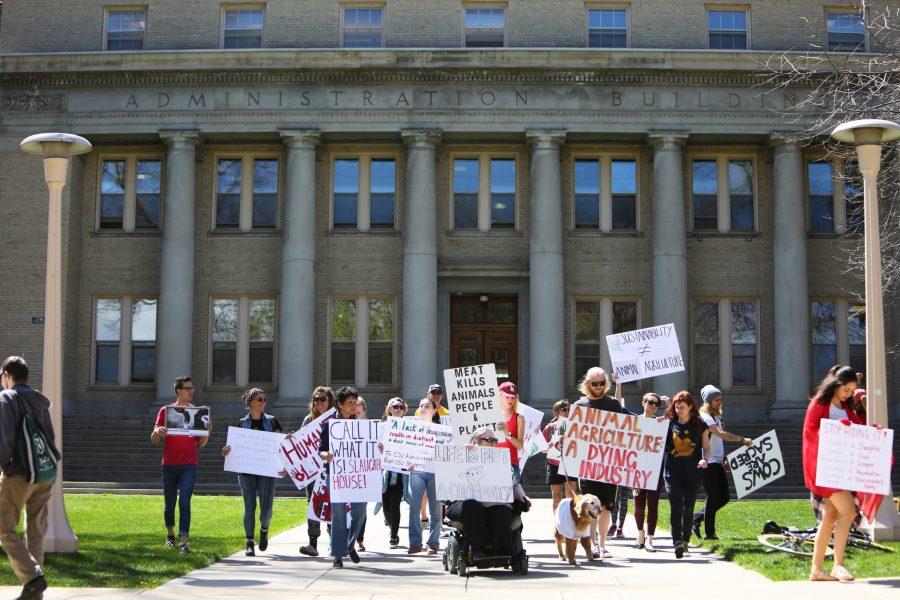 A group of protesters against the construction of a slaughter house on campus march towards the Plaza. (Davis Bonner | Collegian)

The announcement of the upcoming JBS Global Food Innovation Center sparked concern among animal rights groups on campus because they believe the facility will be a slaughterhouse.

The animal rights group, Rams Organizing for Animal Rights (ROAR), students and community members concerned with the planned on-campus meat harvesting facility rallied outside of the Administration building on Wednesday to voice their concerns.

Abigail Bearce, a sophomore studying fish, wildlife and conservation biology who organized the rally, said she wanted to raise awareness about the facility’s construction.

“(We wanted to) get our voices out there, give voices to the voiceless and change the rhetoric of (the facility),” Bearce said. “They keep trying to call it ‘harvest.’ It’s toning down what’s actually happening there. Maybe they aren’t killing 2,000 animals here, but they’re still slaughtering, and a lot of people who walked by didn’t even know that this facility was going to be built.”

Maggie Gilman, a sophomore studying human dimensions of natural resources, said she did not like that JBS is involved with the funding of the facility and will bear the company’s name.

“If you’ve ever taken a walk (through) Greeley where one of their biggest plants is, you can tell it’s a disgusting environment that we don’t necessarily think of the words ‘food innovation’ next to,” Gilman said. “This event will hopefully encourage people to look into it more.”

While students and community members rallied against the JBS Global Food Innovation Center, students who did not share the same views as the ralliers engaged in civil discussion.

Kyle Depperschmidt, a senior studying biomedical sciences, was not opposed to the rally or the facility, though he was unsure why the rally was organized.

“When I first heard the news that people were building it and that people were protesting, I felt that it was a little silly for people to be protesting considering that CSU is a big animal sciences university,” Depperschmidt said. “For me, it makes some sense that they would be building that because they’ve got to teach students how to do that and the fact they want to teach students how to do it ethically and be mindful and efficient. Now, after talking with them for a little bit, I can agree that there’s some shadier things going on with it, but I’m still not against the facility in general.”

While some students were neutral on the facility and the rally, other students did not agree with ROAR’s views.

Elizabeth Esdaile and Kasydi Valentine, both senior animal science majors, disagreed with the rally because they felt there was a lack of information.

“People don’t have all the facts all the time,” Valentine said. “They’re stuck on one certain part of this (facility), but they don’t realize that we have some very useful techniques to make this more humane because we have certain people on campus to help with that.”

Esdaile said she believes the facility will benefit students in the Animal Science department.

“I’m a senior about to graduate, and I would have loved to have this facility on campus for the last four years,” Esdaile said. “We’re relatively behind in terms of a lot of the major universities. Most of the major Ag colleges have something like this on campus to educate, so we’re kind of playing catch up.”

Esdaile and Valentine believe the ralliers were too focused on the notion that it would be a slaughterhouse.

“The packing facility, or what they’re calling the slaughterhouse, is a very small percentage of the facility,” Esdaile said. “We’re going to have a full-scale auditorium, we’re gonna have some research labs, so it’s not solely for that purpose. (The ralliers) see the terrible videos on Facebook and YouTube of some admittedly horrible things being done, but the purpose of this is to prevent that in the future.”