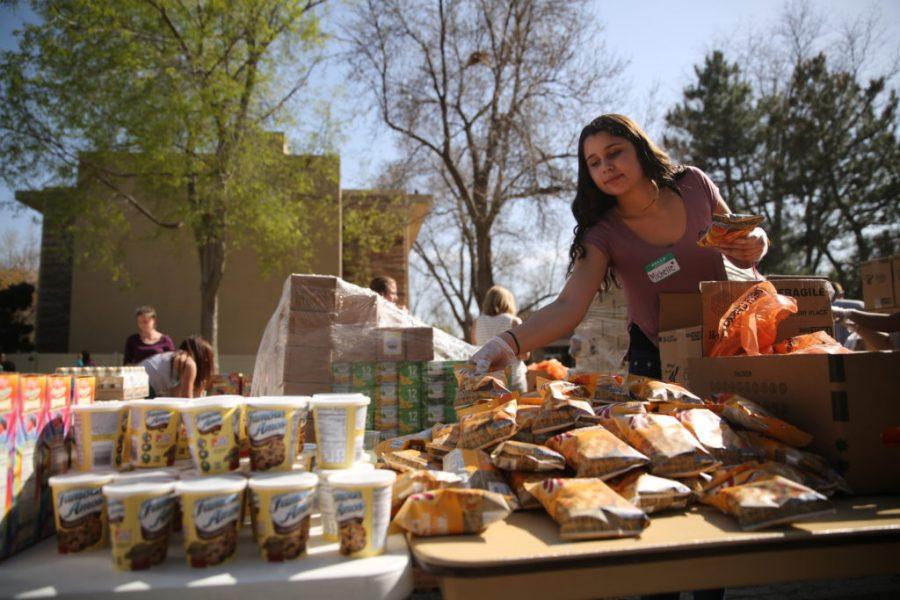 Students and faculty lined up in the sun outside of Sherwood Forest on April 13, waiting to get their hands on up to 50 pounds of fresh food to take home with them.

Hundreds approached the mobile Larimer County Food Bank, brought to campus by Student Leadership, Involvement and Community Engagement. The organizers said 290 students and faculty were served – a total of over 10,000 pounds of fresh food.

This mobile food bank was the second of three that are planned to be brought to the Colorado State University campus in an attempt to cut down on the number of food insecure students and faculty.

The first truck that was brought in March and served 209 students and faculty, handing out a total of 7,403 pounds of food, said Jen Johnson, assistant director of SLiCE.

Johnson added that the food bank and SLiCE planned to double the original number of people for the second time.

“Our goal is that people feel comfortable coming,” Johnson said.

Pamela Norris, the director for SLiCE, said that bringing this food truck to campus helps to fulfill a direct need for students and faculty.

“More than anything we have to be able to create places to have the conversation about food insecurity,” Norris said.

Norris said that one of the reasons that the food bank was brought to campus, beyond just trying to feed those who are suffering from food insecurity, was because other programs are not getting the funding that they need.

Programs such as Rams Against Hunger, a program intended to give students 75 meal swipes to use on meals, are not getting the money that they need to help everyone that needs help, explained Norris.

Students waiting in line shared why they felt that the event was important.

“I think (food insecurity) is something that’s not visible on campus,” said third year social work major Eduardo Hernandez. “Everyone needs the basic needs, food and shelter, to get a good education.”

Third year human development and family studies major Allyssa Ross said that she feels that some colleges may think of food insecurity in a different way than they need to be. Another student agreed that it increased awareness.

Faculty also shared their feelings on getting the food that they need.

Debra Sell, a custodial supervisor for CSU, said she has employees that are not highly paid who did not go to the first visit of the mobile food bank because they did not know about it.

“It makes the resource known to people,” Sell said.

Braden Mays, a member of dining services at Braiden Hall, said that he feels that one of the greatest parts of the food truck is it helps build community and take care of those that need food.

“I think it’s awesome. I like the idea that we’re a community, that we are taking care of each other,” Mays said.

He added that while many people make money, anybody can be broke and need food.

The volunteers that helped hand out food varied from different organizations, including Associated Students for Colorado State University.

“It’s an amazing feeling having a hand in solving food insecurity,” said Cole Wise, director of governmental affairs for ASCSU.

Wise added that while it is not the final solution to the problem, it is a good start.

The final mobile food truck that will be brought to campus for the school year will be on May 4 from 3:30 to 5 p.m. outside of Sherwood Forest.