Sexual assault survivors share their stories at Take Back the Night 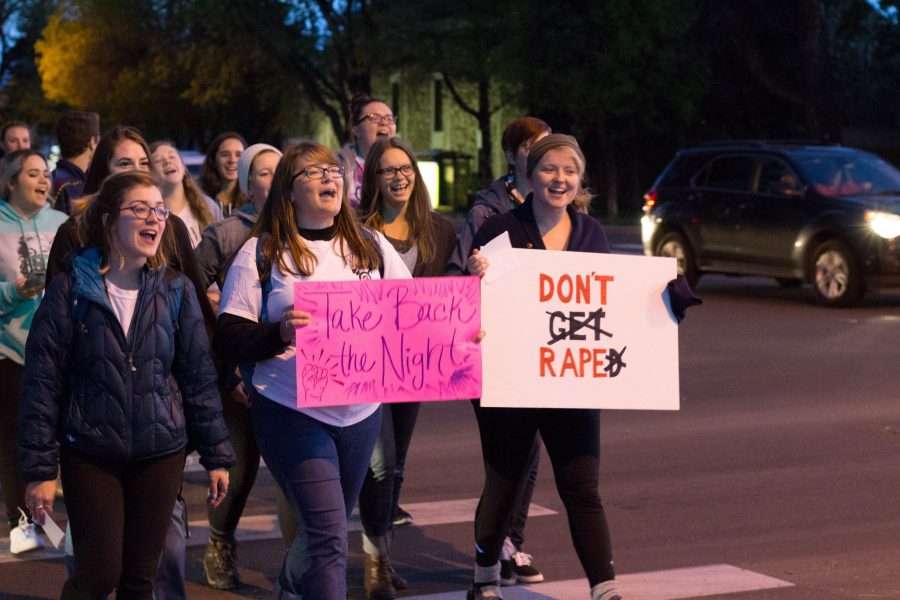 Abigail DeWolfe and Susan Brown lead the Take Back the Night March against sexual and domestic violence in to Old Town. (Ashley Potts | Collegian)

Lyn Weyand, the keynote speaker at this year’s Take Back the Night event, shared with the audience a deeply personal story: She was raped by her brother.

Tears and sniffles could be heard in the crowd of about 100 students and faculty members who participated Wednesday in the annual sexual assault awareness event Take Back the Night.

Participants gathered for the event on Colorado State University’s Montfort Quad, and then marched to Old Town, Fort Collins. The event was organized by CSU’s Campus Feminist Alliance in partnership with the Women and Gender Advocacy Center.

Weyand said that her parents were initially supportive when she wrote them a letter to come out as gay and to tell them her brother raped her, but by the next day, their support disappeared.

Weyand said she reached out to everyone in search of justification – she wanted to understand why she was assaulted.

“I opened up to anyone I could. I told everyone my story,” Weyand said. “I wanted someone to say, ‘This happened to you because …’ I just needed a formula. I just needed an explanation because I didn’t want this life.”

Weyand said deciding to take her brother to court was difficult because she had to recount her experience again.

“They do ask you to call your perpetrator and talk details, and they do ask you to give your personal life up,” Weyand said. “It becomes an entirely different world. It’s a full-time job to be a rape survivor going through the court system.”

Stephanie Bess, a junior theatre major, spoke about her relationship with Gian Clavell and the aftermath of telling her story to the Collegian.

Bess said she was wary about the article because she did not know what the reaction would be, but she knew sharing her story could help other survivors.

“I didn’t know what was going to happen … if people were going to resent me for it,” Bess said. “But, I knew that if I could sacrifice my identity and myself to encourage other victims to speak up, I should do it. I want you guys to know that by having a voice, that’s where I found justice.”

Bess told attendees how the WGAC helped her with her case.

“(The staff of the WGAC) are actually some of the only people who listened to me and heard my story and gave me advice and guidance,” Bess said. “If you ever are struggling with your situation, these are the people to go to.”

About seven students spoke during the ‘Speak Out’ portion of the event. Many students expressed their feelings and stories through poetry and offered words of encouragement to other survivors in attendance.

In her speech, Weyand said it was difficult for her to confront her assault. She said she had wanted the world to stop spinning.

Weyand revisited that analogy at the conclusion of her speech.

“The Earth hasn’t stopped turning,” Weyand said. “We’re still going. Earth goes, and so must I.”