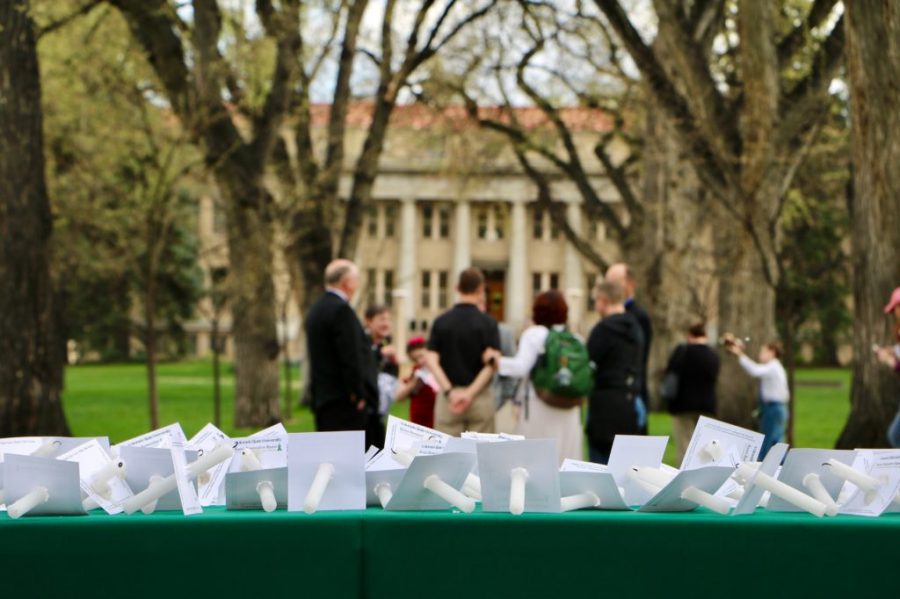 Candles lay on a table in the center of the Oval after the Rams Remember Rams ceremony. (Joe Oakman | Collegian)

The ceremony is an annual event that is held to honor CSU students, faculty, staff and retired employees who died during this academic year.

The event began on the north steps of the Administration Building at 5 p.m., where President Tony Frank stood to address the crowd. Participants were given candles and green ribbons as a symbol of remembrance.

According to an article in SOURCE, the candles are “a symbol of hope and a way of showing solidarity with one another and the people being remembered.”

As Vice President Blanche Hughes and Provost and Executive Vice President Rick Miranda read the names of those who recently died, participants lit each other’s candles as a sign of solidarity.

“They live on in our memory,” Frank said after the list had been read and the Alma Mater was sung.

The list included Courteney Seaman, a student who died in a car accident in February during an ice storm, as well as John Clark Pratt, former chairman of the CSU English Department. Those who died in the Armed Forces were remembered as well.

The following members of the CSU community were honored at the ceremony:

“Grief is the price we pay for love,” Frank said, quoting Queen Elizabeth II’s remarks after the 9/11 attacks.

Participants turned towards the Oval for a moment of silence while two members of the Armed Forces played ceremonial music on trumpets. The song played, known as “Taps,” is a bugle call played during flag ceremonies and military funerals.

“Colorado State is better because they were with us,” Hughes said.

With a salute from the Armed Forces members, the candlelight processional was lead by Frank, Hughes and Miranda to the center of the Oval. Here, Frank gave his final remarks.

“Let us leave here with a light that cannot be extinguished,” Frank said. “Let us keep it burning bright, delivering it to those in darkness.”

After placing his candle on a table in the center of the Oval, Frank silently walked back up the steps of the Administration Building.

Community members followed, placing their candles on the table while an a capella group sang “Somewhere Over the Rainbow.” The ceremony concluded with the option for reflection in the non-denominational Danforth Chapel.

Rams Remember Rams began in 2014 and it takes place every spring semester. The event is non-religious and is open to everyone in the community.

“This event says something about our campus,” said John Henderson, the Assistant Dean of Students and Director of Parent and Family Programs. “We are a Ram family. Once a Ram, always a Ram.”

“It’s important to take the time to reflect on those we have lost,” Henderson said. “Rams remember Rams, but Rams also support other Rams.”

The ceremony is a single event that includes everyone as opposed to a series of events, according to Henderson. This, as well as the candles, were meant to represent a sense of solidarity within the community.

“We are in this together,” Henderson said.

Collegian news reporter can reached at news@collegian.com or on Twitter @jenn_yingling.