One dead in motorcycle crash at College and Swallow intersection 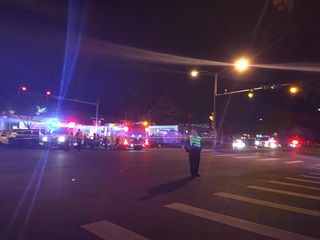 At 7:24 p.m., emergency dispatchers received a call of an accident and injury at the intersection of College Avenue and West Swallow Road. Fort Collins Police Department responded to the incident.

One of the motorcyclists was pronounced dead on scene. The other motorcyclist was rushed to an area hospital with serious injuries. The driver of the white Tahoe is in stable condition.

According to a press release given by the Fort Collins Police Department on Tuesday morning, the two motorcyclists were traveling south on College Avenue when a white Chevrolet Tahoe made a left turn in front of them.

The driver of the Tahoe has been identified as Fort Collins resident Stacie Kenney and the vehicle had two passengers. All passengers of the vehicle remain uninjured.

One of the motorcycles, driven by a juvenile, managed to avoid collision with the Tahoe, but laid down his motorcycle farther south on College Avenue. The juvenile was immediately transported to the Medical Center of the Rockies.

The second motorcyclist was pronounced dead on the scene after colliding with the right rear of the Tahoe. The name of the deceased motorcyclist will be released by the Larimer County Coroner’s Office following a thorough investigation.

Anyone who has information and has not spoken to law enforcement is encouraged to contact Officer Tim Brennan at 970-416-2229.