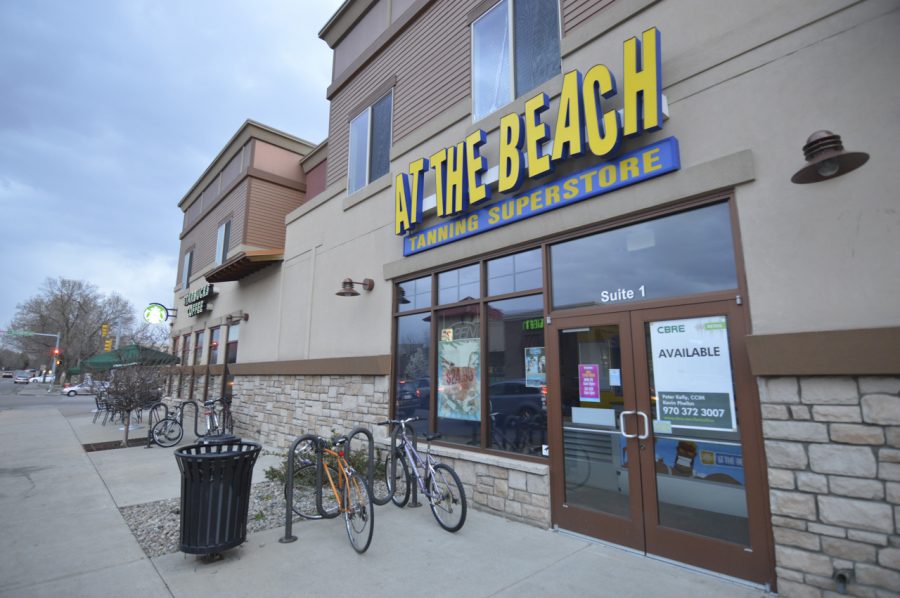 The police substation recently passed by Fort Collins City Council will take the place of the At The Beach tanning salon. (Michael Berg | Collegian)

Residents in the Campus West area should expect to see a new building housing a police station and offices for Off-Campus Life this year due to increased concern from the Fort Collins City Officials.

The substation will take the place of the At The Beach tanning salon located at the intersection of Elizaebeth Street along City Park Avenue, according to the Coloradoan.

Mayor Pro Tempore Gerry Horak said a major reason the police substation will be located in the Campus West area is due to the number of violations that occurred.

“If you take a look at the violations of nuisance or whatever, if you look at the Campus West (area), it’s like a red blob,” Horak said. “There’s a lot of activities, there’s a lot of party concerns. It’s a way for the police to really work out of there and get an even better idea of who lives there.”

According to data provided by Lori Frank, the crime analyst for Fort Collins Police Services (FCPS), the police have responded to more than 8,000 calls in the Campus West area over the past three years. Since 2014 there have been a total of 1,568 party complaints and 2,908 traffic complaints. FCPS have received 1,394 calls reporting suspicious circumstances since 2014.

Mayor Wade Troxell said the police substation will incorporate numerous services that are important to the Campus West community.

“It brings together a one stop shop of services related to the neighborhood services or student life, and other services as it relates to (the community),” Troxell said.

FCPS will partner with neighborhood services, code compliance, Off-Campus Life, CSU Student Affairs, the CSU Police Department and the liasion for Fort Collins and CSU to establish a community between residents in the area and police, according to the ordinance passed by Fort Collins City Council.

Troxell and Mayor Pro Tempore Gerry Horak said the substation has been a priority for City Council for two years but was delayed due to budgeting. The cost of the substation is $218,750, according to the ordinance.

“This been requested and looked at for a long time,” Horak said. “It’s dealing with those neighborhood livability issues for people following our codes and following our laws. That area of town especially has had a disproportionate number of violations and concerns.”

Horak said the police substation would be the second place in the city for a police presence besides the police headquarters located in District 1.

Troxell said the growing population of the Campus West area factored into the decision to locate the police substation in the area.

“Right there in Campus West, it’s our highest pedestrian traffic, our highest bike traffic (and) our highest bus traffic,” Troxell said. “There’s a lot happening (in) the neighborhoods and student housing. The densities are higher in that area, and I think that’s a natural culmination of why (the substation) was located in Campus West.”

“Anytime agencies can work together and collaborate it is always a benefit to the community as well as the agencies involved,” Harris wrote in a email to the Collegian.

Harris said the University and the city of Fort Collins have already discussed resolutions for issues between long-time residents in the Campus West area and students in rental properties.

“The Campus West community is represented by both long time property owners and students living in rental properties,” Harris wrote. “The University and city already have programs geared towards addressing issues associated with the dynamic, and the substation concept is further an example of the commitment both have to the citizens of Fort Collins.”