Morton-Rosenthal under fire from accusations, investigations during ASCSU campaign 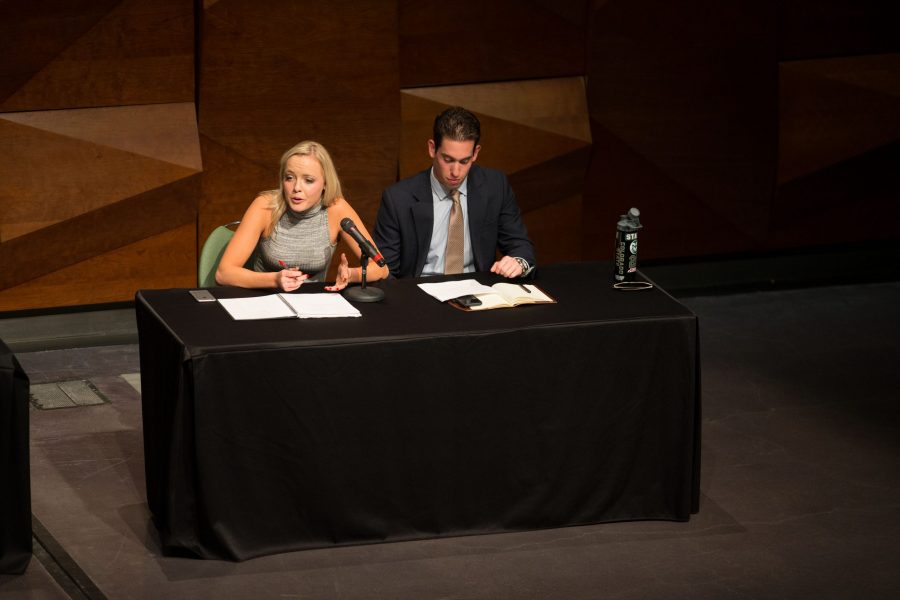 Update: As of April 4, Council member Kristin Stephens clarified with the Collegian about the nature of her relationship with Hailey Morton.

“I have always been open to working with ASCSU leadership on any issue no matter who serves as President. Hailey is the only candidate who reached out to me, but I am always available to meet with students, community members or anyone who wants to talk about city issues,” Stephens wrote in an email to the Collegian.

Stephens wrote that she and Morton maintain a respectful, trustworthy and open working relationship.

Stephens did not comment further on how their relationship would help to change or amend U+2.

Editor’s note: A previous version of this article implied that the campaign’s connections with the city were investigated, due to sentence structure. The circumstances under which the campaign was investigated by the ASCSU Elections Committee has been further clarified.

Candidates Hailey Morton and Yuval Rosenthal have come under fire because of accusations and an investigation during their campaign for the Associated Students of Colorado State University presidency.

The Morton-Rosenthal campaign was accused by other campaigns of claiming to have close connections with members of the Fort Collins City Council without any evidence.

In addition, the campaign was investigated by the ASCSU Elections Committee March 27 after the campaign started a GoFundMe fundraiser before the start of the election campaign season. According to ASCSU elections code, campaigns were not allowed to begin campaigning until March 20. The committee did not find the campaign responsible for early campaigning.

Hailey Morton and Yuval Rosenthal have campaigned on the promise of re-evaluating the housing occupancy ordinance, commonly known as U+2 in Fort Collins. The campaign claims the goal is achievable for them because of close ties with the city, but other campaigns told the Collegian they cannot find any evidence to prove that these connections actually exist.

Morton said her campaign has been careful not to reach out to council members running for re-election until after the city elections have finished.

“We do not want to jeopardize their race, however, we look forward to working with them in the future to find impactful ways to help students without compromising the wants and needs of their constituencies as well,” Morton wrote in an email to the Collegian.

Council members Gino Campana, Ray Martinez, Gerry Horak, Ross Cunniff and Wade Troxell all wrote to the Collegian that they had not heard from the Morton-Rosenthal campaign about U+2.

Morton clarified that she has reached out specifically to Council Member Kristin Stephens.

“I have met with Council Woman Stephens to discuss the history of U + 2 and what it would look like going forward,” Morton wrote. “She is actually the one who told me ‘me + 3′ may not be the way around it either, as this does not ensure that prices will drop as well.”

Stephens also wrote to the Collegian.

“Hailey did reach out to me to ask a few questions about the ordinance. I gave her some background and then referred her to the city website for more detailed information,” Stephens wrote.

Currently, the Morton-Rosenthal campaign has a picture on their Instagram account, highlighting that theirs is the only campaign that has, “meaningful relationships with city officials in order to tackle U+2.” Changing U+2 remains as a large part of their campaign platform.

“For steps moving forward just to clarify, we are looking to see U + 2 eliminated, it is antiquated and discriminatory against students, especially those of lower socio-economic status,” Morton wrote.

Additionally, the Morton-Rosenthal campaign started a GoFundMe fundraiser on March 1 before the start of the election campaign season. Campaigns are not allowed to start campaigning before 8 a.m. the Monday after spring break, according to the ASCSU Referenda and Elections Code.

The ASCSU Elections Committee decided the Morton-Rosenthal campaign was not guilty for violating ASCSU campaign policies this past Monday.

However, other campaigns said they were advised by Sam Barthel, the current Elections Manager, to not start GoFundMe pages for their campaigns.

Presidential candidate Edward Kendall said serving in ASCSU has given him insight into how difficult it can be to remain unbiased.

“However, it definitely would have benefited our campaign to have access to some outside funding sources (like a GoFundMe),” Kendall wrote in an email to the Collegian.

Presidential candidate Josh Silva said he could not speak for the opinions of the Elections Committee, but said members of other campaigns questioned the committee’s decision.

“People involved in several campaigns … are feeling pretty disappointed with how the ruling came out and definitely have potential concerns,” Silva said.

Barthel explained how he responded to other campaigns.

“A campaign did reach out to me shortly after the GoFundMe page was brought to my attention, and I did advise them not to create one due to the concerns already expressed by myself and other campaigns about the legitimacy of this form of fundraising,” Barthel wrote in an email to the Collegian.

Barthel said he wrote a report detailing what he found wrong with the situation. The ASCSU elections committee is composed of individuals nominated by Barthel and ratified by the ASCSU Senate. It fell to the committee to decide whether the Morton-Rosenthal campaign was guilty of campaigning before the start date.

“It is my belief that the committee did not believe that the act of fundraising did constitute campaigning, and this is in part due to how few CSU students were impacted by the page,” Barthel wrote.

Within 24 hours of a decision from the Elections Committee, any campaign or candidate may submit a written appeal, according to Chief Justice, Jacob Stein.

Collegian reporter Haley Candelario contributed to this report. Candelario and Rachel Telljohn can be reached at news@collegian or on Twitter @H_Candelario98 or @racheltelljohn.