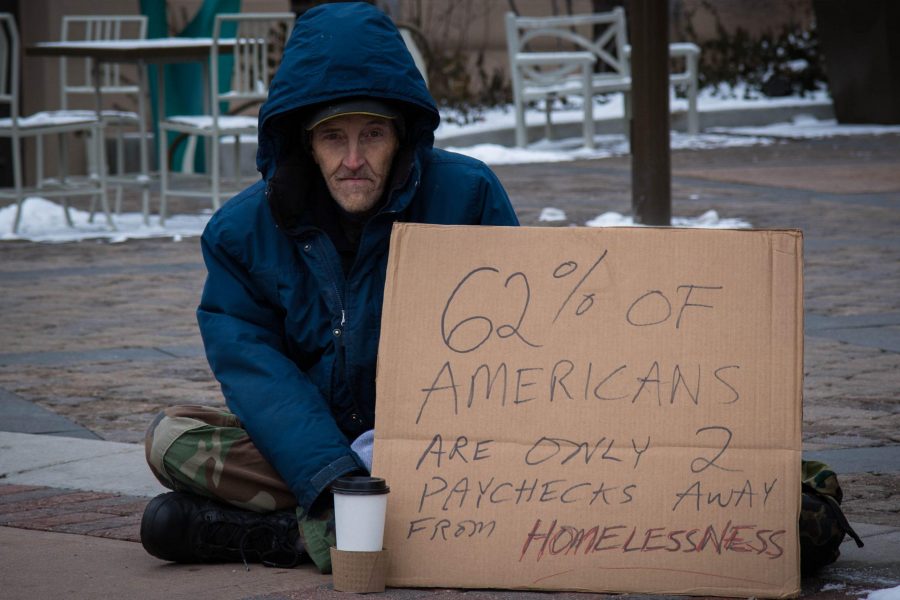 Stephen Wildgen, also known as 'The Colonel,' is a cook at the Fort Collins Rescue Mission. He went to CSU, then to med school, then was in the military for 32 years, earning the title of Colonel. He is working on a book on homelessness titles 'Signs of our Times' with CSU Professor Francisco Rael. (Julia Trowbridge | Collegian)

The fourth Saturday of every month, Colorado State University School of Education instructor Elizabeth Urban and her husband Leonard Urban wake up early so they can arrive at the Community of Christ Church on East Oak Street to set up for an event they call “Saturday Morning.”

The event is unrelated to the church, but instead provides a place for the Fort Collins homeless population to gather and get their basic needs met.

Elizabeth and Leonard, along with a group of 15 volunteers, often including CSU students, arrive at 7 a.m. to set up for Saturday Morning, which runs from 8-11 a.m. A hot breakfast is prepared along with coffee and a shower station is set up with clean towels, soap and lotion. A collection of clothing items is placed out on one table for guests to take and snacks for guests to stash away in their bags for later are set out on another.

The event is made possible by various donations of food and clothing.

“We couldn’t do this without the food bank,” Elizabeth said. “It’s such a blessing.”

The first Saturday Morning was held in 2013 at the Murphy Center after Elizabeth, Leonard, Elizabeth’s sister and other family members decided they wanted to do something to give back.

“We wanted to do something as a family,” Elizabeth said.

They decided that they wanted to provide support to the people experiencing homelessness in their own community.

“We felt that there was a great need to feed and take care of people,” Leonard said.

The event started to grow and the Murphy Center changed hands and the event changed locations.

John Gibson has been coming to Saturday Morning for three years. He and his wife, who has multiple medical conditions including diabetes and lymphedema, live out of their cars

Gibson said he heard about the event from word of mouth and showed up with his wife in hopes of finding food and a place to shower.

“(Saturday Morning) helps out everybody,” Gibson said. “I wish they could (have) it every weekend.”

Gibson helps out with the event every month and has gotten to know Leonard and Elizabeth.

“Leonard and Liz have helped us out quite a few (times),” Gibson said. “I consider them my family.”

Gibson works for Spa Palace delivering hot tubs. He is a high school graduate with some college education and hopes to go back to school to study auto mechanics and computer repair.

Gibson says that he would like to see more compassion and understanding towards the homeless community.

“I’ve seen people yell out of their cars ‘get a job,”’ Gibson said.

Leonard said that there is a common misconception that people are homeless due to laziness and their own faults.

“People think it’s easy (being homeless),” Gibson said. “It’s not easy at all. You have to figure out how to get food and washed up. It’s pretty hard for a lot of us … sometimes we don’t eat. Sometimes we do.”

For Elizabeth, Saturday morning is an opportunity of solidarity.

“I think that each person we get to serve breakfast to has an individual story,” Elizabeth said. “It’s wonderful to hear their stories.”