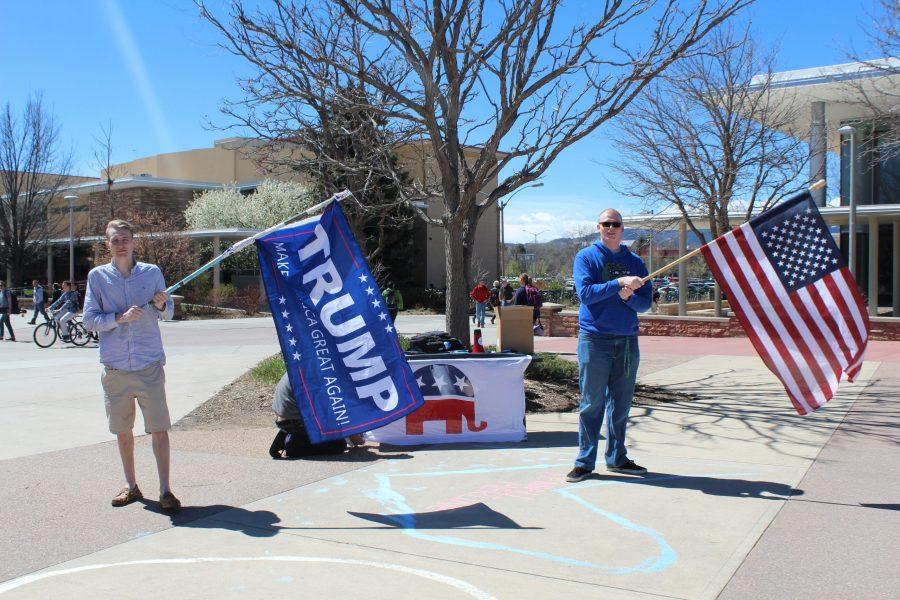 The Conservative Interest Group of Colorado was on the Plaza on Monday to rally in support of their chosen candidates in the ASCSU election. The group was not representing the Republican Party in this event, but were instead giving its members a voice in the political events occurring on the University level.

All but one member of the group endorsed Silva-Wells for the ASCSU presidency and vice presidency. The group’s president, Juan Caro, abstained from an endorsement due to his affiliation with the Colorado Republican Party, being the Vice Chairman of the Second Congressional District. Caro does however still support Silva-Wells.

The reasoning for the endorsement of Silva-Wells by the members of the group was because they felt that the running mates were the most moderate of all the candidates. They also felt that all the other candidates were too liberal.

“I want to be behind the candidates who are best going to align with my beliefs as a Republican, as a conservative,” said Shawn Johnson, a member of the Conservative Interest Group, and an undeclared freshman with a business interest. “I feel like a lot of the other candidates have views or backgrounds that I don’t necessarily align with, so I don’t want to back them.”

Sean Houston, a freshman history major, though not a member of the Conservative Interest Group, was rallying with them in support of Josh Silva and Michael Wells.

“I’m a Libertarian, and I’m tired of the liberal culture that’s been created on campus, and anti-conservatism, and (Silva-Wells) are the moderates,” Houston said. “I want them more than anyone else because I would much rather have a moderate being our President than the other candidates.”

Caro said that the members of the Conservative Interest Group also felt it was important that Silva-Wells focused less on subjective issues during their debates and more on issues that mattered to all students such as expensive student fees.

At the time that the Conservative Interest Group was on the plaza in support of campaign, the Facebook page for the Silva-Wells campaign posted that they were “not affiliated with any third-party group, organization or political party.”

However, the two clarified that the post was not in reference to the Conservative Interest Group’s support, but was instead because of a new rule passed by the ASCSU Election Committee last week that heavily restricted the associations that campaigns could have with others.

The ASCSU election continues through Wednesday.