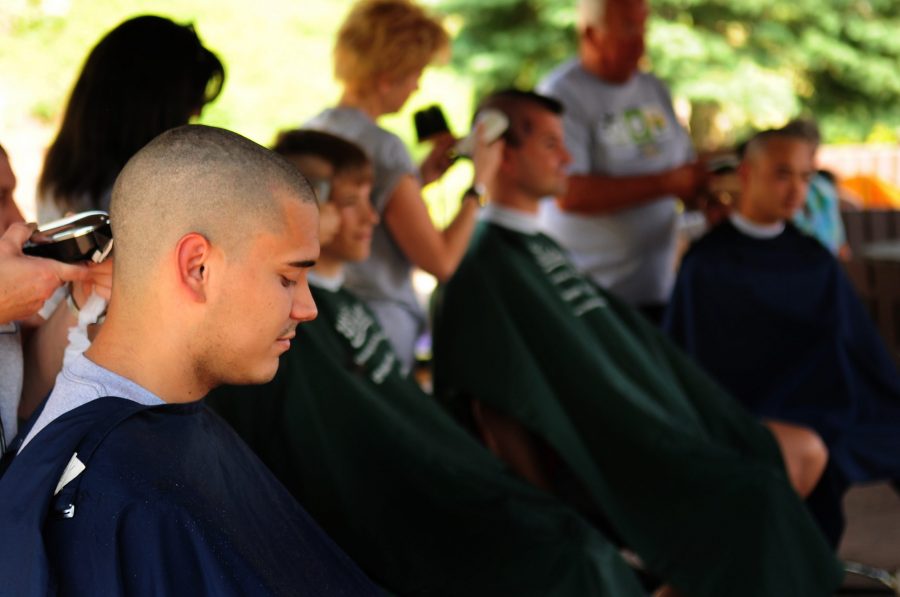 http://www.af.mil/News/Article-Display/Article/116248/ramstein-airmen-pay-st-baldricks-6645-for-haircut/ U.S. Air Force Senior Airman Miguel Mascorro, 86 Maintenance Squadron, has his head shaved as he participates in the first St. Baldrick's event held on Ramstein Air Base, Germany, June 26, 2010. The St. Baldrick's Foundation is an organization that tasks volunteers with getting sponsored to have their heads shaved as a demonstration of their camaraderie to children that have been diagnosed with cancer. (U.S. Air Force photo by Staff Sgt. Jocelyn Rich)

Alpha Phi Omega will host a fundraiser April 21 with the St. Baldrick’s Foundation where attendees will have the opportunity to shave their heads in solidarity for children with cancer.

St. Baldrick’s was founded in 1999. In 2000, the first shaving event was held in Manhattan on St. Patrick’s Day, which resulted in 19 bald heads and $104,000 donated to fund research for the Children’s Oncology Group.

These organizations are selected at the beginning of the semester and Alpha Phi Omega typically raises over $10,000 for each one. In the past, the fraternity has donated to CASA of Larimer County, McKinney Backpacks, Rescue Mission and many more.

The St. Baldrick’s fundraiser is unique because of the way in which attendees donate money toward childhood cancer research. In exchange for donating or pledging money, participants shave their heads.

This year, Alpha Phi Omega has partnered with James Salon located in the Lory Student Center, who will donate their time and resources to help the fraternity raise money for a great cause.

James Wyatt can be reached at news@collegian.com or on Twitter @jwwyatt2295.