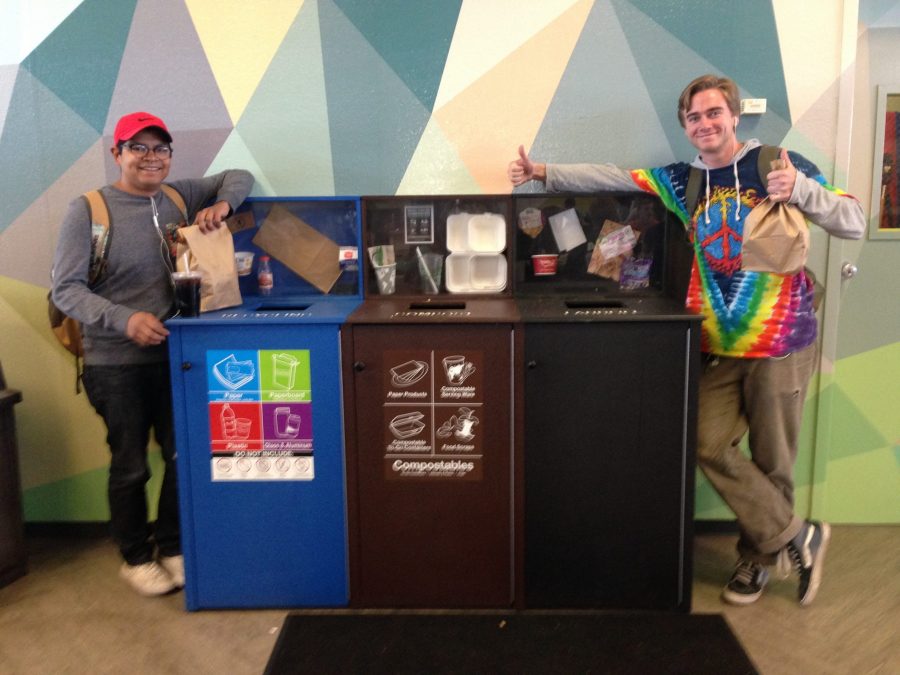 Students pose with a compost bin in one of CSU's dining halls. (Photo courtesy of Dominique Ashe)

Allison Hall recently received funding from the Associated Students of Colorado State University for a three-compartment compost bin on April 12.

Dominique Ashe, a sophomore studying human dimensions of natural resources, is an ASCSU senator for Warner College of Natural Resources and an Eco-Leader for Allison Hall. Ashe proposed a bill to ASCSU to place a compost bin in Allison Hall.

Allison Hall, where Spoons resides, is currently the only dining hall that does not have 24/7 access to a compost bin. According to Ashe, the bin will be mobile. During Spoon’s operation hours, it will be placed inside the dining hall. When Spoons is closed, it will be placed outside of the closed doors so students will still be able to use the bin.

The bin will be purchased from a company titled MAX-R. All other compost bins within the dining halls have been purchased by the same company.

According to Tim Broderick, the Assistant Director of Sustainability for Housing and Dining Services, the bins are made entirely from recycled milk jugs. The bin includes three compartments: blue for recycling, brown for compost and black for trash. The bin is equipped with shadow boxes offering examples of what bin is appropriate for the given item.

“The bins are designed to clearly educate students on how recycling, trash and compost should be sorted for public access waste,” Ashe said. “This was to largely prevent our compostable stream from getting contaminated because we have no sifting system at our Foothills (Campus) composting operation.”

To Ashe, funding this bin is vital because it will help lower other costs such as dump trucks and payments for landfills.

According to the 2016 Trash Stream Waste Audit included in the Annual Sustainability Report conducted by Housing and Dining services, 41 percent of items that were thrown away could have been composted.

“Larimer County Landfill is set to be maxed out by 2025, and the estimated cost of a new landfill is between $8 and $15 million dollars,” Broderick wrote. “Composting helps extend the life of the landfill and aid in spending that money more efficiently. Composting also helps reduce GHG released into the atmosphere by the landfill taking CSU and the community one step closer to carbon neutrality.”

Ashe believes that the bins will be necessary given the state of the Larimer County landfill because it will educate students on what can be diverted from the landfills.

“Throwing trash away to landfills is not free,” Ashe said. “It costs money, but worse it costs the environment and our health. If students can transition to pay for recycling and composting, we will be able to potentially expand natural areas by avoiding newly bought land to be used as another landfill site.”

According to Ashe, there are currently no definitive plans for future compost bins, yet she envisions compost bins placed within every academic building in the future.

“I think that an attainable goal in the near future would be to add composting for students to use in the (Lory Student Center),” Ashe said. “It is our hub and I feel that the student center should embody every value that (the) students share.”

Collegian news reporter Piper Davis can be reached at news@collegian.com or on Twitter @PiperLDavis.