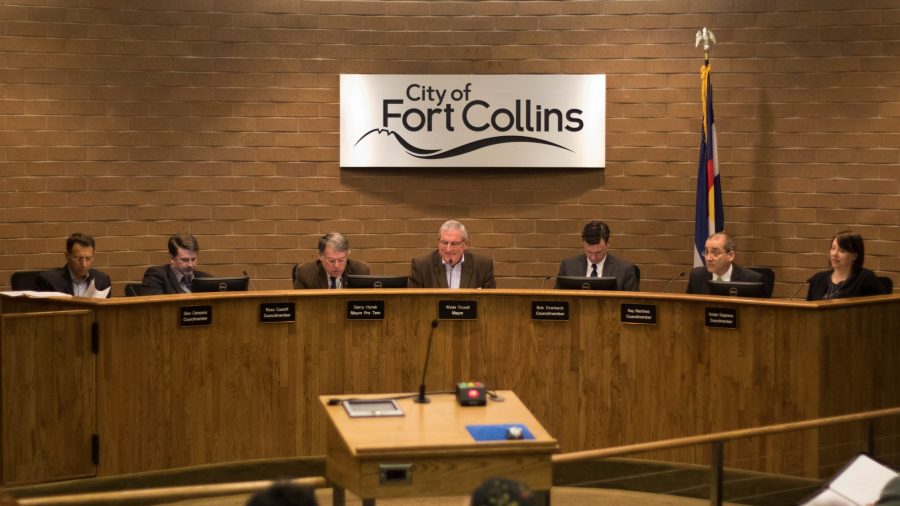 The City Council Board Members gather for a meeting on Tuesday, March 3rd (Julia Trowbridge | Collegian)

As City elections come to an end next Tuesday, candidates for mayor and for council have adopted varying degrees of spending and funding their campaigns.

For candidates such as incumbent mayor Wade Troxell, ample funds and a strong support base have been by his side since his first campaign in 2015. However, not all City election candidates have the same resources.

As of March 27, Troxell has received $4,250 in donations, putting his campaign at $21,000 and marking it as the most well-funded of the race, according to 2017 campaign finance reports. Troxell said the donations signify a strong level of support from the people of Fort Collins.

“I lived here my entire life and I’ve received every endorsement I could possibly receive. I think that’s a reflection of my leadership,” Troxell said.

Unlike his second-time opponent, Pruznick appears to finance large chunks of his campaign with his own funds. Pruznick began his 2017 campaign with $10,160, $7,000 of which came from donations made in his name. During that time, he spent $4,950 on advertising and logistics.

At the start of the second and most recent finance reporting period between March 13 and March 19, Pruznick had $6,609 which includes $1,200 of his own money. By the end of the reporting period, he was left with $1,150 after spending $5,000 on advertising.

In 2015, Troxell also considerably outspent his opponents in the first stage of the campaign. At the beginning of his 2015 mayoral campaign, Wade Troxell started with $31,000. In comparison, fellow candidates Michael Pruznick and Ward Luthi started their campaigns with $320 and $8,600 respectively.

The same trend of campaign financing can be seen when looking at Ross Cunniff’s District 5 victory in 2013 when he ran against Patrick Edwards.

Cunniff is currently the incumbent District 5 representative, which means he is Colorado State University’s representative on the City Council. Like Troxell, Cunniff had a strong monetary base to support his 2013 campaign.

In 2013, Cunniff raised $6,775 during the first stage of the campaign. His opponent at the time, Patrick Edwards, raised only $361 that same time span. Cunniff consistently outspent and out-raised Edwards throughout the campaign.

However, the amount of money spent does not always correlate to winning the election. In 2011, Cunniff ran for City mayor, facing Eric Sutherland and Karen Weitkunat. Although Cunniff managed to raise the most money out of all the candidates during that campaign, he ultimately lost to Weitkunat.

Based on 2011 financial reports, large portions of Cunniff’s mayoral bid were also self-funded, with donations in his name reaching up to $22,000.

Rita Knoll, chief deputy of the City Clerk, wrote in an email to the Collegian that candidates for mayor can only receive $100 per individual donation. Candidates running for City Council may receive up to $75. Candidates may also receive itemized contributions in excess of $20, but they must declare them.

In 2013, Cunniff also funded portions of his campaign with his own money.

This year, Cunniff is facing Duane Hansen for the District 5 seat. Cunniff still has a greater financial lead than Hansen, and holds almost $2,000 to Hansen’s $421 after their most recent campaign spending period, according to the latest 2017 campaign finance report.

On the other hand, due to monetary constraints, the campaigns of recent CSU graduates Atlas and Hansen have adopted an exposure-based approach, rather than a reliance on expensive advertising.

Both Hansen and Atlas said they are still paying off their student loans. Atlas is a Wells Fargo banker and Hansen is a courtesy manager at the State On Campus student housing complex.

“I’m definitely focusing on meeting with people, (meeting with) groups … even just one conversation with someone new, that’s the stuff I pay more attention to,” Atlas said. “I’m not necessarily trying (to reach $20,000) … but I’m trying to speak for the people, and every dollar I can get (from them) is more important.”

Hansen compared his fundraising efforts to a guerrilla campaign.

“My campaign is focusing more on how we can get the word out without spending much in terms of money,” Hansen said.