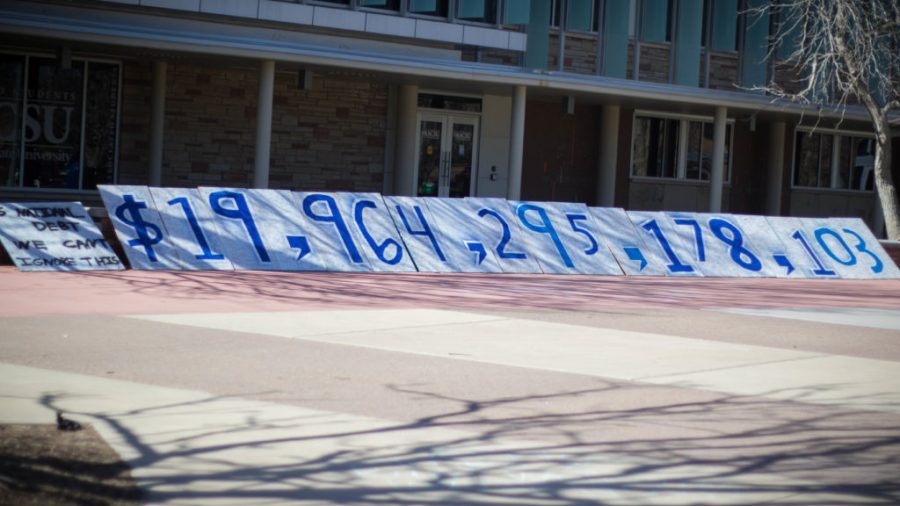 According to Andrew Walter, a member of the CSU chapter of Young Americans for Liberty, the clock is meant to bring attention to the issue of U.S debt.

“We’re trying to raise awareness of how big the national debt is and how much it’s increasing and the fact that what we are spending in D.C. is not sustainable,” Walter said. “We’ll go bankrupt if we continue on this path.”

The goal of this, Walter said, is to start the conversation about smaller government, what it means and how the U.S. government can do better.

The event also acted as a kickstart for the group, who are currently working to be approved by SLiCE.

Young Americans for Liberty is a national group, started in 2009 after the presidential campaign of Ron Paul. Walter said there was an active chapter at CSU several years ago, but it disbanded after its leadership graduated. Now the group is being brought back and Walter hopes they will grow to hundreds of members.

Walter said the group has plans for making itself and its purpose known on campus.

“We hope … to bring speakers onto campus (and) have larger debate-type meetings where people can discuss politics openly,” Walter said.

Zach Taylor, co-president of the CSU chapter of YAL, said one major issue the group will fight for is free speech.

“(You’ve seen people) attacked on other campuses just for saying their views,” Taylor said. “So we’re really making people aware that’s not okay and that we stand up for people’s right to speak, no matter what it is.”

According to its website the mission of Young Americans for Liberty is to “identify, educate, train and mobilize youth activists committed to ‘winning on principle.'”