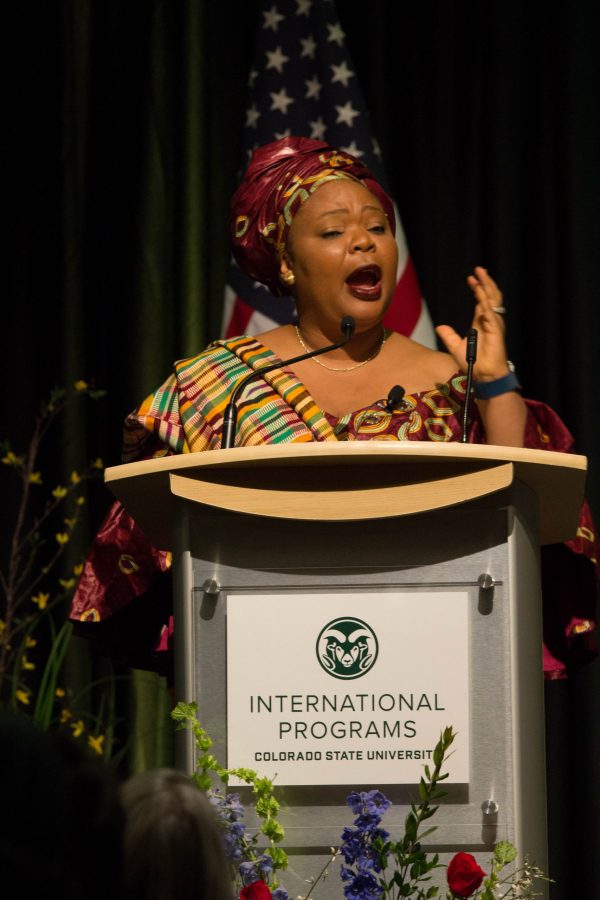 Looking out over the wide expanse of generations, races and cultures, Leymah Gbowee winner of the 2011 Nobel Peace Prize, asked one simple question which presumed to hold the audience in a trance. Staring out into the crowd she said: “I’ve seen each and everyone of your humanity, do you see mine?”

Gbowee, recipient of the 2011 Nobel Peace Prize for her part in ending the Liberian Civil War, spoke to students, faculty and the Fort Collins community attendees at Colorado State University in the Lory Student Center Grand Ballroom on Monday, March 6.

Trained as a trauma counsellor for former child soldiers, as well as the leader of the Women of Liberia Mass Action for Peace movement, Gbowee spoke on her experiences with her part in ending the Liberian Civil War as well as the importance of acceptance and embracing humanity.

Gbowee commenced her speech by discussing the multiple forms of distress that persist throughout the world today.

“We find ourselves in a world today, globally and locally, that is in deep distress,” Gbowee said. “Racism, discrimination, violence against women and girls, wars and threats of wars are common things …. and you ask yourself ‘is this for real?'”

Through her travels of Africa, Gbowee has experienced the violence and abuse that affects the millions of Africans.

“I have seen children as young as eight or nine carrying guns and are told to go and kill their mother and families in order to prove themselves to the rebel militia,” Gbowee said.

Gbowee went on to elaborate on her own experience fighting for an end to the Liberian Civil War.

“People living in Liberia at the time described our lives as existed,” Gbowee said. “You didn’t survive or try … you are grateful to god to be alive and you are happy to see life fall, that is the sum of your life.”

Gbowee explained to the audience her constant questioning of whether or not there was hope to be had during the conflict. She recalled a time during the conflict where she was on her way to a community to act as a mediator and instead witnessed forced recruitment for the first time.

“I remember traveling as part of duty as a travel counselor and a mediator with the church and going to a community where I was asked to meditate,” Gbowee said. “We were in the van and all of a sudden a truck cut us off and people started running, it was the first time I had seen forceful recruitment … the trucks stopped and the soldiers start picking up children and throwing them into the truck.”

She described the event as almost movie-like in the fact that it seemed so unreal that the events were occurring. Following the event, they were searched by soldiers on their way home, and the car of people behind them were killed due to having cash on themselves.

Gbowee described how she began to promote change with her group of woman, stressing the importance of the diversity of the group.

“I want all of us to hold this thought … diverse experiences, same political space, same conflict context, husbands were in either one group or the other,” Gbowee said.

She explained that these woman of diverse backgrounds of came together to protest and fight for peace in Liberia, but their diversity also resulted in some conflict.

One woman was refusing to hold another woman’s hand in a prayer circle and when asked why she said that “her son had killed her nephew,” and butchered the body forcing the family to buy it back in pieces, Gbowee said.

Despite this pain, Gbowee resolved the conflict elaborating that peace for Liberia was more important than how they felt personally.

Through this perception of common humanity Gbowee taught her fellow protestors forgiveness and strength to protest, elaborating on the fact that even those who have committed atrocities are someone else’s child.

“We fasted, we prayed, we did whatever it took, but primarily we stood firmly on our conviction that peace was more important than politics religion and ethnicity,” Gbowee said.

Gbowee presumed to relate her experience with division during the war to the divisions that exist throughout the world now with political parties, races and cultures. She asked that people break down the barriers by seeing the humanity within each another.

“There are stereotypes that people create and these create walls between us, but I ask you to use the open mind challenge,” Gbowee said.

After explaining her own experience with stereotyping, she noted the division in America due to the most recent political actions taken by President Donald Trump.

“When people say America is divided I say yes indeed, and when people ask me if we will find our way back I say ‘yes,'” Gbowee said. “To be whole again, your country must break down issues on the humanity of those issues.”

Gbowee ended her speech recalling a question she asked people during the protests.

“In Liberia, we look each other in the eyes as women, and the one question we ask each other: ‘I see your humanity, do you see mine?'” Gbowee said.

Following the speech, the crowd was allowed to ask questions.

Several CSU students stood up to ask questions, one of which was Lamin Kane, a senior international studies major and member of the Africans United.

Kane asked Gbowee about advice she had for African CSU students.

“You are not Americans, don’t think that, being African is in your blood … we need leaders that love the continent more than themselves,” Gbowee said.

The speech received a standing ovation.

“It was powerful, poignant, something we need,” said CSU alumna Linda Miller. “Especially at this time. That whole idea of humanity. That is all comes down to, humanity, not just issues of politics with a take away message.”