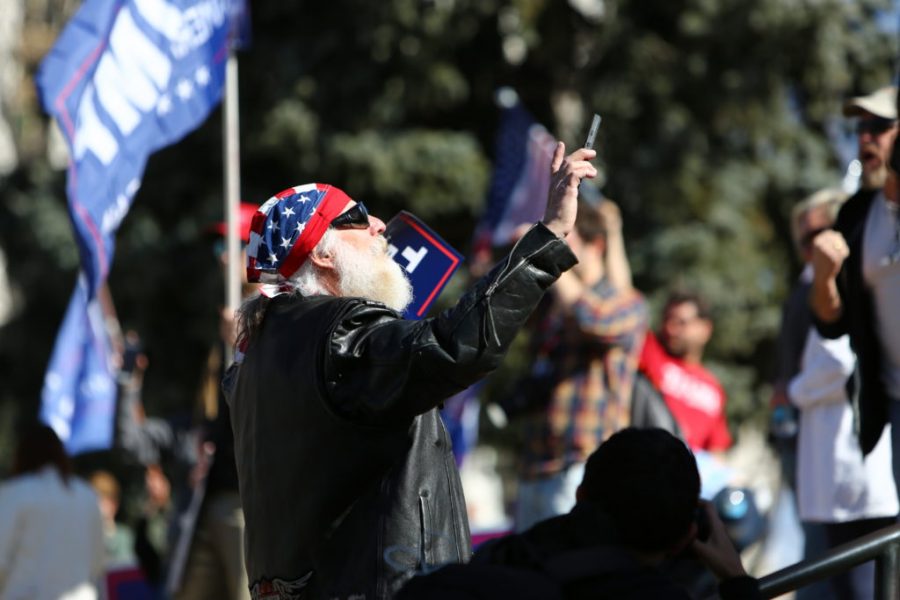 Chuck H. urges those attending the Trump rally to "turn your back" to those protesting the event to avoid conflict. (Davis Bonner | Collegian)

DENVER – Masked protesters in all black uniforms chanted, “no Trump, no KKK, no fascist USA” as supporters of President Donald Trump chanted, “take your masks off” at the March 4 Trump rally on Saturday in Denver.

The rally, one of nearly 50 rallies occurring across the nation, drew a crowd of over 300 supporters and around 100 protesters.

While organizers of the original March 4 Trump rally called for supporters to host local rallies, the media platform, It’s Going Down, urged protesters across the nation to attend to show their opposition.

Protesters stood across the street from the State Capitol at the start of the rally, then crossed the street after the first two speakers finished. Supporters of President Trump shouted at the protestors’ chants.

The ANTIFA group crossed over to the State Capitol. Trump supporters shouted back @CSUCollegian pic.twitter.com/beXNxqQXUo

Around 50 Denver Police officers and Colorado State Patrol members separated the protesters, who stood behind police tape, from the rally.

Protesters continued to chant rallying-cries such as, “no Trump, no Pence. Community self-defense,” and “no Trump, no KKK, no fascist USA” throughout the duration of the rally.

A group of a dozen protesters also ran after a supporter escorted by police. Police informed one protester, who apparently got too close to the supporter, that she would go to jail for harassment if she attempted to get closer to the supporter again.

Protesters also burned Russian flags with “Trump” written on them and ripped an American flag in half.

Though protesters did not cross the police line, some ripped the police tape in half while other unmasked protesters walked around the State Capitol through the rally.

A 27-year-old protester by the name of Hanah went around the police tape to deliver a note to the supporters and the police before she was escorted back over the police line.

A police officer escorted ANTIFA protestor, Hanah, 27, back over the police line after she walked through the rally @CSUCollegian pic.twitter.com/f5zNfgVWuU

Per Hanah, her note read, “we love your country as you do. Dissent is patriotic. Respectfully, Hanah.”

“Don’t make them the story,” he said to supporters. “Make (the rally) the story.”

Community members and state representatives continued to speak at the rally over the chants of the protesters.

Patrick Skorjanec of Gays for Trump said the name of the organization is a direct response to the Democrats’ tactics.

“Democrats like to use fear-mongering and identity politics to scare voters into supporting them,” Skorjanec said. “This is why we call ourselves ‘Gays for Trump.’ It is a direct response to Democrats’ identity politics.”

Skorjanec said he supports President Trump in his plans to focus on America.

“Even though we use the title ‘Gays for Trump,’ we are Americans first,” Skorjanec said, “And, like Mr. Trump says, he is going to take care of all Americans first.”

Araceli Cortez, a recent graduate of Everest College, said she attended President Trump’s Colorado campaign rallies and will continue to attend rallies that support him.

“Anything that has to do with my president, I’m going to go and support it,” Cortez said. “He doesn’t just need our vote, he needs our support for the four years he’s in office.”

Casper Stockham, the co-founder of the at-risk youth program Project Purpose, said Republicans need to stop defending their beliefs because their candidate won.

“For years Republicans have been on the defense,” Stockham said. “We need to be on the offense. Last I checked, we won.”

Skorjanec also urged supporters to continue to voice their beliefs.

“My call to action is this: engage in open dialogue and discourse. Show people that it is not only okay to think for themselves, but it is an American virtue,” Skorjanec said. “You are allowed to have your own thoughts and ideas, and here’s the kicker: it’s okay to respectfully disagree.”