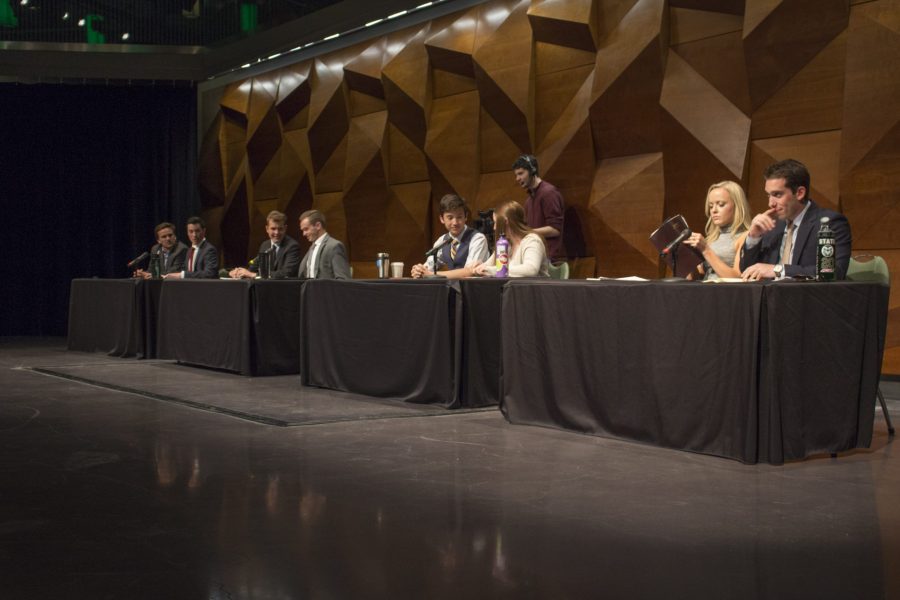 ASCSU candidates debated Wednesday in the Lory Student Center, competing against one another for positions of Senate, President and Vice President. Voting for candidates opens April 3. ( Brooke Buchan | Collegian)

Four presidential platforms debated for an hour and a half, following a debate between three candidates for the newly created speaker of the senate position.

Isabel Brown, Jennifer Murray and Bayler Shubert are running for speaker of the senate. Each addressed how they wish to increase transparency in ASCSU, how they hope to make the most of the new position and engage with the student body.

Josh Silva and Michael Wells addressed the follow through on their campaign promises and the feasibility of getting things done, especially because both have prior experience with ASCSU finances.

“Everything on our platform we’re confident we can do,” Silva said.

They said the biggest roadblock of their campaign is bringing people together over issues such as U+2.

Sustainability is not just a buzzword for their campaign, Silva said, and a highlight of their platform is a sustainable RamRide app.

Wells talked about intersectionality as being a huge part of what diversity stands for and that their campaign wishes to hit upon that intersection.

As a Middle Eastern cultural center is at the heart of their platform, Nick Bohn and Tristan Syron said it is important they ask the experts about issues of diversity.

“Everything we’re reaching for is achievable,” Bohn said.

Outreach and student engagement is everything to Bohn-Syron. Much of their platform has come from student feedback.

“I think it’s ridiculous to expect you to come to us. Under Bohn-Syron, (if elected) absolutely we will go to you,” Syron said.

Syron said that because they do not agree, everyone will have a voice under their campaign and used the stadium as an example. Bohn said he is invested in the interests of student tailgating, while Syron he said is willing to protect the students who are at home sleeping on game day.

Sustainability is important to their campaign. Buttons for the Bohn-Syron campaign used soy based ink, no flyers have been handed out, and they have plans to expand composting to be campus wide.

Bohn emphasized their campaign really is a voice for the students, and that they will always work to find the best solution for student issues.

Hailey Morton and Yuval Rosenthal were in agreement, and said their role is to be an ambassador for students.

“(We want to be) facilitators for inclusivity and diversity,” Morton said. “(My running mate is my strong suit as) he brings a background no one else can offer.”

Morton said they want to be careful stewards of student fees, costing the least amount of money to fellow students. Morton’s concern was about the over $100,000 surplus of student fees and paying for things such as a RamRide app.

U+2 was also something Morton said their platform tackles.

“We do owe it to our fellow Rams to do better than Boulder,” Morton said.

“These are offices that need to be fought for,” Morton said.

Eddie Kendall and Kyrie Merline addressed diversity as one of their main campaign pieces. Diversity and social justice, or the “people” aspect, is one of three – people, economy and environment – the campaign looks at when addressing issues of sustainability.

“I grew up and no one around me looked like me. Invite those people that have stories to come and tell it themselves,” Kendall said.

Kendall said the team understands ASCSU is only one part of a more complex picture, and that fighting food insecurity is not a job for solely two people.

Kendall emphasized the importance of stories and allowing each person to tell their own to their campaign platform.

“I believe we can change the world, but we understand there will be roadblocks,” Kendall said. “(Running) is my story of being a CSU ram and what it has meant for me to come to this university – genuine interest in others’ stories.”