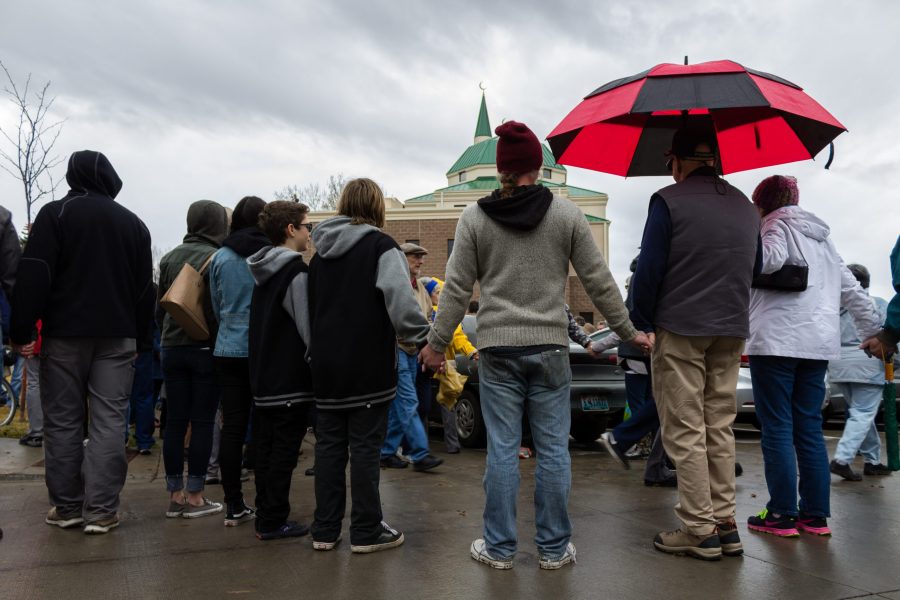 Community members form a circle around the Islamic Center of Fort Collins to show their support for the center after it was vandalized in the early hours of Sunday Mar. 26 (David Johnson | Collegian)

Students, children, families and senior citizens crowded outside the Islamic Center of Fort Collins on a rainy Sunday evening to get a clear view of the prayer room’s shattered glass windows.

After the Islamic Center was vandalized early that morning nearly 1000 people gathered outside the building to show their support.

A suspect overturned furniture and shattered the glass windows on the back doors of the Islamic Center around 4 a.m. Police collected a screw driver and a Bible thrown into the prayer room for evidence.

City Council members, state representatives and the president of the CSU Muslim Student Association were a handful of the speakers present at the community event.

Tawfik Aboellail, Director of the Islamic Center, informed the crowd of the events that happened earlier that morning, but emphasized the strength of the Islamic community.

“We will not bow down,” Aboellail said. “When someone sows one seed of hate, we will sow a thousand seeds of love.”

Mayor Wade Troxell expressed his grievances to the community.

“This is such a tragic event,” Troxell said. “Fort Collins is a welcoming and friendly community for all. We’re accepting of all faiths and all religions. We embrace our Constitution and our freedom of religion.”

Troxell made a call for action to find the suspect who vandalized the center.

“As your mayor and a lifelong resident of Fort Collins, I condemn these hateful and vengeful acts and we will find the perpetrators,” Troxell said. “This is not our town. Let’s reach out and embrace our friends and our neighbors and create an even more inclusive community for all.”

State representatives John Kefalas and Joann Ginal, and city council members Ross Cunniff, Bob Overbeck and Kristin Stephens were in attendance and spoke to the crowd.

Stephens was the first city council member to hear about the vandalism in the morning. Stephens said she attended an event at the Islamic Center the day before, but was heartbroken to hear the news of the vandalism.

“I think that we don’t expect this in our community, but it’s here, so we have to deal with it,” Stephens said. “The most important thing that happened to me today was when I was here surveying the damage, people from the Plymouth Congregational Church started walking out here for their service. It shows me that love really is more powerful than hate.”

Lamine Kane, the president of CSU’s Muslim Student Association, said he was happy about the outpouring of support he received.

“I received text messages (of support),” Kane said. “The Muslim Student Association is very thankful that you are here with us.”

Kane noted that the rain, although not ideal, has a cultural significance to Islam.

“I wanted to say … it’s not a coincidence that it’s raining,” Kane said. “In Islam, rain is mercy, so God has brought mercy upon us, and the person that did this, what have they accomplished? They’ve only helped the cause because now we are here together.”

“It’s not a coincidence that it’s raining. In Islam, rain is mercy, so God has brought mercy upon us.” -Lamine Kane, President of CSU Muslim Student Association

The Islamic Center started a GoFundMe page to raise $15,000 to repair the damages. The GoFundMe page had raised $15,025 as of Sunday evening.

At the conclusion of the rally, members of the Islamic Center asked participants to form a circle around the building as a symbol of the community’s protection.

Hana Reeser, sophomore health and excercise sciences major, said she came to the rally to show her support for the Islamic Center after hearing about the vandalism.

Ashwaq Al Wardi, a sophomore landscape architecture major, said she did not expect the vandalism to occur.

“To be honest, I never expected it to happen in Fort Collins,” Al Wardi said. “Here, I’ve never faced a lot of racism. Everyone is so friendly to me even though I identify as Muslim.”

Al Wardi said she attended the event to receive support from the community and show support for others in the Islamic community.

“I think it’s very important to be here today,” Al Wardi said. “First of all, to be reassured that people are here for you. Second, to stand in solidarity with your other Muslim brothers and sisters.”

Anyone who would like to donate to the Islamic Center to repair the damage can donate online at the GoFundMe page.