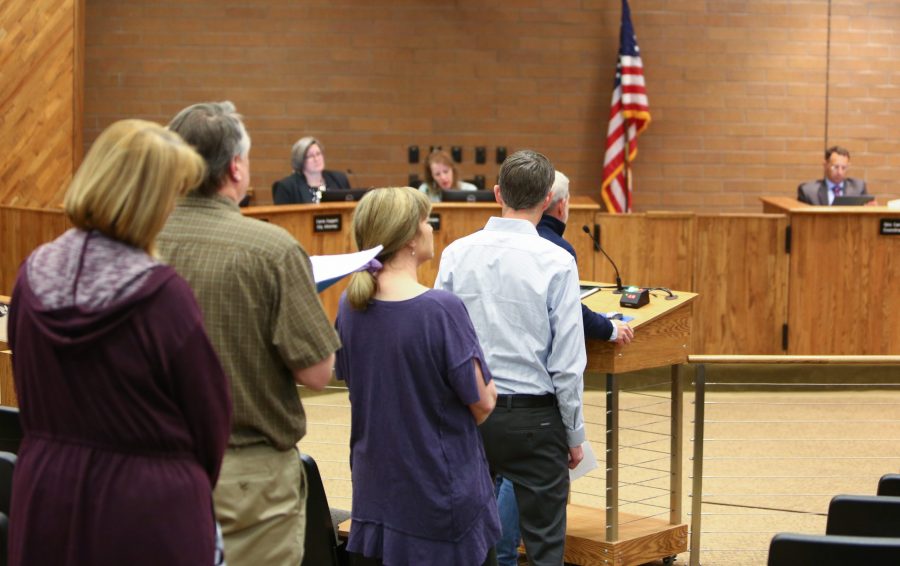 Originally, the ordinance prohibited sitting, kneeling or lying on sidewalks, benches and plazas, leaving personal property unattended, and having more personal property than one can carry in downtown Fort Collins.

The amendments changed the prohibition of sitting or lying on sidewalks or plazas downtown. Now, the ordinance only prohibits leaving personal property unattended on a public sidewalk or bench and sitting, kneeling or lying within 10 feet of a public restroom. It also prohibits lying on things not designated as sitting areas within 20 feet of a transit facility, but this rule exempts areas at transit facilities that do not offer seating areas.

During the first reading at the last City Council meeting March 8, the ordinance was passed 6-1 with the amendments.

According to the ordinance, the ban was proposed due to the City “experiencing difficulties over how public facilities are being used or misused.”

The City is conducting research on additional options for personal item storage, such as lockers. The regulations made by the ordinance will be evaluated after one year, and City Council will make modifications if necessary.

Over the past few months, the ordinance has been the cause of multiple protests hosted by the Fort Collins Homeless Coalition. Many opposed the ordinance because they believed it would unfairly favor business owners and would target the downtown area’s homeless population. The American Civil Liberties Union of Colorado denounced the ordinance, writing that it was “outrageous, cruel and absurd,” and that it would criminalize the experience of being homeless.

The Fort Collins community was divided on whether or not to support the ordinance. When Fort Collins City Council called for public comment on an amended city ordinance considered by many to be a sit-lie ban, people wearing bright neon yellow stickers that said “lockers not jail!” lined up to speak.

Lynn Thompson, a member of the Fort Collins Homeless Coalition expressed concerns on how it would be enforced without discrimination. She also commented on the $250 penalty for leaving property unattended.

“(What) I wanted to say on the subject of harsh penalties is that $250 might not seem like a lot of money to some people. It certainly can be a tremendous burden for someone else,” Thompson said. “We should take that into account, especially when we’re talking about a crime as petty as forgetting your purse on a bench or leaving a backpack somewhere while you go into a store.”

Charlie Meserlian, owner of Fort Collins Truck Sales, urged Council to pass the ordinance with the section prohibiting sitting and lying in the downtown area reinserted.

“I’ve had these homeless in my face for 30 years, and this town has a reputation for being shangri-la for these people,” Meserlian said. “Passing this ordinance, I think, would be the right direction for it not to be a shangri-la.”

Meserlian was against the introduction of lockers funded by the City.

“I think building lockers at public expense is not your place to be doing this,” Meserlian said. “If someone wants to do it, that’s their business, but it’s not up to the City government.”

The Council discussed the definition of unattended property and obstruction.

Jeff Mihelich, City Manager, said they were using the common definition of the word. He said if someone is immediately absent from their property, such as a bag, it is considered unattended. Mihelich compared the part of the ordinance similar to airport safety measures of leaving a bag unattended. Multiple council members also asked for more clarification on the issue of obstruction.

Council member Ray Martinez emphasized that the ordinance was not intended to target the homeless.

Martinez said he would do this through a monthly report.

The fees and maximum jail time for misdemeanors under this ordinance will be set by the court.

Bob Overbeck said he would be on board with the ordinance if the part about jail time was excluded. He said he needed a community response to the problem.

City Council member Ross Cunniff said doing nothing is not an option, and it would be a failure of the Council to not pass it. He said that the ordinance, as it is now, is a compromise.

“I do think we need to move forward on this ordinance and I agree also that there is more that we can do in respect to the separate issue of the vulnerable Fort Collins citizens who are homeless or nearly homeless,” Cunniff said. “We have other policy considerations that this council has taken on beyond I think what Fort Collins has contemplated as its mission. In fact, to the credit of this council and this community, we have tried to step up and help with others in the faith and the charitable community.”

Collegian news editor Seth Bodine can be reached at news@collegian.com or on Twitter at @sbodine120.