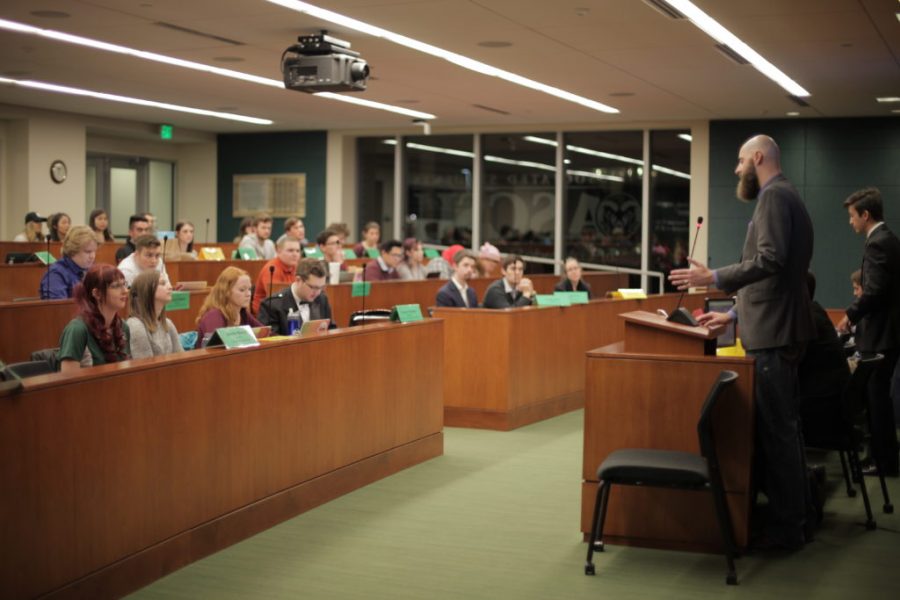 Members of the ASCSU Senate listen to guest presenter, Duane Hansen, during Wednesday night's meeting. Hansen spoke to the body about his campaign for the 5th district of Fort Collins City Council, which includes CSU. Hansen is a former ASCSU senate member. (Natalie Dyer | Collegian)

A bill written in response to increased personal attacks within the Associated Students of Colorado State University was clarified by Senator Lawrence Horowitz Wednesday night.

The bill, authored and presented by Senators Horowitz, Isabel Brown and Tess Holoman at the previous senate meeting, proposed a way for members of ASCSU to deal with ad hominem attacks.

The authors of the bill said that an ad hominem attack is when one’s character is attacked for their actions or voting.

The bill would create a panel consisting of one member from the three branches of ASCSU and an advisor to streamline handling cases of attacks and complaints within ASCSU.

The process currently files an individual’s complaint immediately with the judicial branch, then a hearing is held. Consequences, including impeachment, are determined following the hearing.

Horowitz clarified that the bill was not written in response to ad hominem attacks in the senate body this year.

“A lot of people think that certain things have been said on this floor this year that led to this,” Horowitz said. “The bill started being written over winter break due to matters in the executive branch, not the legislative branch.”

Horowitz further explained that the legislative body of ASCSU is included in the bill for ad hominem attacks that occurred when the Diversity Bill, which created senator positions for the seven diversity offices, was presented.

“It does include senate because of what happened last year, but please keep in mind that this has nothing to do with anything anyone has said on this floor,” Horowitz said. “Everything is good there, but we do want to create that kind of next check for the judicial and executive branch, as well as the legislative.”

The senate voted to approve more than $10,000 from the Board for Student Organization Funding to fund the annual E-Days event for the College of Engineering.

The College of Engineering requested $12,400, which is more than the $10,000 limit from BSOF for the event. According to Section 805 of the ASCSU Constitution, if a request from an organization exceeds $10,000, the allocations from BSOF must be ratified by the senate through a bill, and an itemized budget must accompany the funding requests.

Lensky reminded candidates planning to campaign for president and vice president, Speaker of the Senate, or senator positions, that they are not allowed to bring election materials into the ASCSU office or campaign within the office.

“It’s a campaign violation, and you will get kicked out (of the race) if you campaign inside the office,” Lensky said.

Candidates for the upcoming ASCSU elections will be announced Friday, March 10. Candidates can start campaigning after 8 a.m. on Monday, March 20 and will conclude April 5 at 4 p.m.